Here's a post about my thoughts on random ideas floating around in my head and comments on photos on my camera roll.
There might be a gem or two among them all or not, you decide.  ;-) 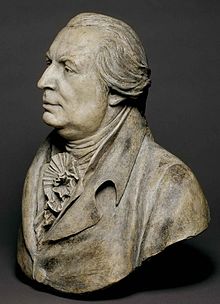 * Janie asked about Gouverneer Morris and the use of a whalebone as a catheter--if that was a common homemade remedy at that time.
Though I am no expert on Colonial era medicine(such that it was)I suspect that among learned circles at that time, this may have been a known possible course to clear a blocked urethra in a man.  To me, the thought of inserting a hollow bone(no matter how slim)into my penis just makes me shudder and I'd say it would also affect most men in the same way too.  But in the days before surgical cures for internal distress this might have been looked upon as a last resort of treatment.  Maybe.....

But, I suspect that there was a lot of DYI surgery and medical treatments going on during Morris' era.  Firstly, just finding a "doctor" in America may have been difficult depending on your location.  Morris may have had access to one being as he was in a settled area but if you were beyond the coastal regions in what would be termed a "wilderness" area you were on your own.

And if you know anything about the history of the practice of applied medicine you know that "modern" medicine only dates back to barely a couple of centuries beyond our current time.  The practice of medicine is barely out of it's infancy in many ways in 2019.  The book I read on The Spanish Flu pandemic of 1918-1919 was eye opening in this regard.  Also my visit to the Apothecary Shop of Dr. Hugh Mercer who practiced his craft in the mid 1700's in Fredericksburg Virginia pre-Revolutionary War was enlightening.
Remember that back in these American Colonial times doctors were treating people with leeches and bleeding as a way to restore the four humors in the body and a doctor was responsible for killing George Washington in this way.

It reads, "CAUTION: DO NOT WITH SHARP INSTRUMENT".
My reply, "I CAN'T EVEN!" 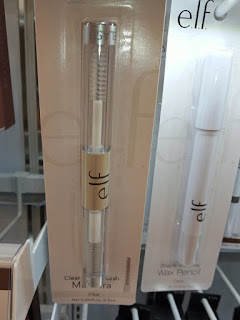 Clear Mascara.
I had never even heard of clear mascara before seeing this.  Why would anyone other than someone who was an Albino use clear mascara?? lolz  Well I googled it and there are uses for it, though making your lashes appear longer, the obvious use for mascara, isn't one of them.
Just proves you can learn something new every day.

*  And speaking of drugstores............
I've been having to peruse the CVS ads seeing as I still have ECBs to use.  I hate CVS ads!  It's so difficult to figure out a scenario to do a deal using their weekly ads because nothing is organized in a way to make sense.  My brain spins like a loading internet page that refuses to complete looking at their ads.
And this makes me insane too......... 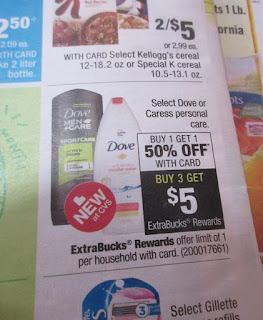 When they have a Deal where you have to buy 3 items to get the ECBs but the sale is a BOGO50% off.  I can handle this at Rite-Aid since on the third item I'd get a 20% Wellness discount but not at CVS.  I'd have to buy 4 to get 50% off 2 of the items but pay full price for the other 2 and I am buying ONE MORE THAN I NEED TO TO DO THIS DEAL which means I am spending WAAAAY too much money on this!
It just makes me gnash my teeth.

*  And speaking of CVS I started watching this Vlogger as she does a CVS deals rundown since I still have ECBs to use.  I noticed that she looks and sounds like someone I've met! 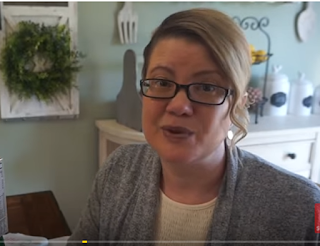 At least to me, the "Savvy Coupon Shopper" is pretty much a doppelganger for SAM the blogger. lolz

*  I thought this was cute.  It was the paper on the sample size ice cream cones DQ gave out for free back in March while we were on vacation...........

"I am a Coneacopia of Happiness."


*  The Rhododendron bush is finally in bloom.  Too bad it waited until after Daughter's graduation to blossom fully. 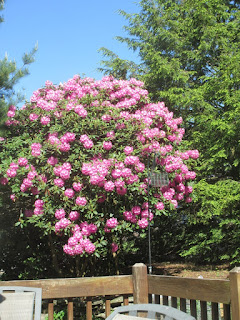 *  I am so OVER selling locally on the FaceBook sites here.  Ok, let me rephrase that...I am so over dealing with the people who also use that selling sites to buy.

My ads are very brief  and to the point, but include all the pertinent information needed.
I have been selling diapers and pull-ups of which I have various sizes.  I state what I have, what sizes, how many I have, the price and where I will meet.  I also say I update the post as soon as something is PENDING or SOLD and remove it if sold.

Invariably someone will message me and ask, "Is this available?"  That's it.  Well, I can't tell you if "IT" is available if I don't know what "IT" you are interested in buying! lolz  Let me just state for the record that this is maddening!!!

I also had someone ask me, "Until when is the size XX pending".  I said, "Until they pay me."  Right?  This bitch flipped out on me and called me a few choice words such that I had to block her. lol

Then I had the one who messaged me in SPANISH?!  What do I do with that?  OMG, I don't speak Spanish. lolz
Someone writes an ad in English please reply to it in English.....this is NE PA not San Diego CA.  If you read it(in English)you must understand some English so respond in English even if it's broke and I can work with you.  That's just common courtesy.

But the best one is the one who was going to meet me just off the interstate exit, 5 miles from my house, as they were passing by on the interstate down to go camping south of here on Friday and gave me a window of between 4 and 4:30 pm.  So I asked her to text when it got close to the time whether she was going to be there closer to 4 or 4:30 as I didn't want to be sitting for 30+ waiting on her, which was agreeable to her.

So I load up the car with her pull-ups, turned on the car and at 3:45 I sent her a text asking if she was going to be there at 4 or later before I actually drove to the meet-up spt.

I get this reply, "Wont be that way til tomorrow".

No "I'm sorry", no details on when tomorrow or anything else, etc.
And would she have even texted me she wasn't coming today if I hadn't asked first?!?  So rude.

So I replied, "If you want them tomorrow you'll have to come to my house.  It's 5 miles off the exit. LMK".
Of course I didn't hear back from her, not that I'd have responded if she had. lolz

And to piss me off worse, her Avatar or whatever you call her photo on Facebook is a selfie with mouse ears on it.
Grow up people!


*  Hubs and I went to the Amish Grocery Outlet recently.  It's fun to poke around in there as you find interesting food items sometimes. 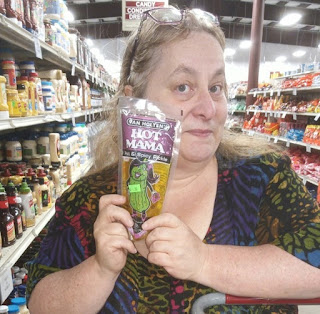 I had to pose with this pickle item because well, I AM a Hot Mama. teehee 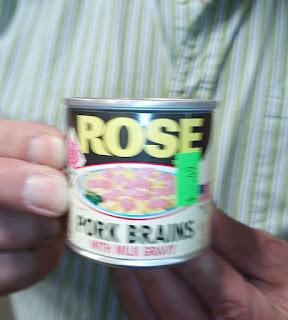 And Hubs found this can of brains.....pork brains to be specific and with milk gravy.
Um, no thank you.
My mother would have been all over this item putting it into a plate of scrambled eggs.  She actually did this on one occasion without letting us know of the "secret ingredient".  meh. 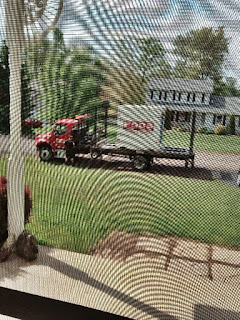 When we dug out the boxes in the closet in her bedroom we found this though and it doesn't belong to us............ 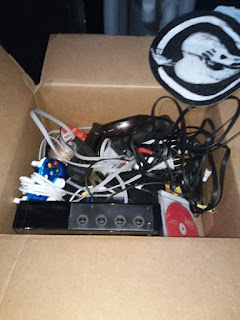 A box of electronics that belong to the Fiancé.  So we told them what was in there and they want some of it and want me to ship it to them.  I am uncomfortable shipping electronics not in their original boxes(I have used shipping companies for years as an eBay seller and I know the horrors. lol).  I figure we can just bring it with us when we go there in January for the wedding, right?  The financé lived without this stuff for 2.5 years(how long ago he left here)he can wait another few months for it. 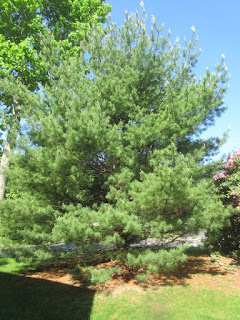 This massive pine tree was just a twig(I was taller than it)when we moved in almost 19 years ago.  Just guesstimating now it's got to be 30 foot tall and the branches make it 20 foot wide.
I was just staring at it this past weekend and noticed that it was "giving me the finger". 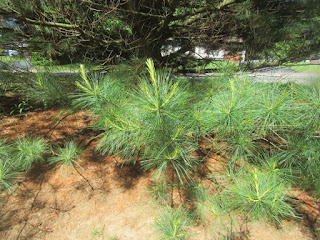 All these new shoots growing on the ends of the branches look like middle finger salutes!
Am I crazy or do y'all see it too?? lolz


Anything interesting going on in your life lately?