So I alluded to some changes coming down the pike in 2016 for us at Chez Sluggy in earlier posts.

And here is the big one.......my daughter is going back to school and moving back in with us in PA.
And she is bringing her boyfriend.
As Sonya Ann would say, "yaaaaay" with a frowning face. 8-(

As of now we don't have a hard timeline for when this move will occur as Daughter is dealing with medical issues and wants them address in Louisiana before they move to Pennsylvania(at least right now that is her plan).  So when she starts school(and moves here)will depend on when the medical is addressed.  She basically needs Laparoscopic back surgery.  I won't get into details on this here.
We are at the whims of her spine doc and our insurance provider(and probably appeals by said insurer)as to when she will be able to get the surgery.  If she gets it soon, she can start college in the Fall and will be moving here in August.  If they keep delaying then she starts in the Spring and moves here in December.  If her spine doc refuses to do the surgery on her then she can quit her job and move back sooner rather than later and get a new spine doc up here.

We have very little clutter left in our house(just lots of dirt lolz)but I am again searching the house with a keen eye toward getting rid of more "stuff".  Hubs has lots of "stuff", from his book addiction, to his chess accoutrements to his beer brewing supplies.  My "stuff" is a fabric stash and lots and lots of toiletries.  The food stockpile is not "stuff" and will be needed even more once they all move in here.

I do still have some things I never listed on eBay(about 5 tubs worth)which I will be going through soon and doing something with it all.  The immediate problem is that Daughter's old room is now the Toiletry Room so most of the toiletries here need to be moved elsewhere.  If I had my druthers I wouldn't be selling or giving a lot of this away(as we will use it eventually and with 2 more people in the house we will be going through the toiletries at a faster clip).  But I took a serious look at it all and some of it needs to go for lack of room.  I guess I could keep it all and have Rubbermaid tubs stacked around in all the rooms of the house but I don't want the house to resemble a storage unit. lolz

So, even though some of you readers feel I don't need the cash and I should just give it all away, I will be putting some of the toiletry stash up for sale locally.  I really don't want to have to organize a yard sale/toiletry sale or go to a flea market and sell my excess, as I have done in the past, as it's time consuming and just something I don't want to deal with at this time.  So I am using a FB yard sale page for my town presently to sell items and will expand out and list items on the local Craigslist board if the sales just don't happen as quickly as I need them to.  And if neither of those ideas pan out then I can get use to the "Early American Storage Unit" Look.  ;-)

If I had my druthers I wouldn't sell any of this but life changes and you roll with the punches.

I listed a few items on Friday and a few more on Saturday morning and here is what I've earned for my efforts........... 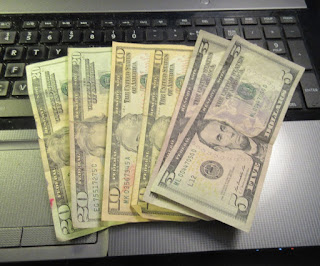 $70 bucks and someone is picking up shampoo this afternoon which will make a grand total of $90 so far.  8-)))

Once Daughter and BF move in we will have added expenses all around.  At least until the BF gets a job here and starts paying for some expenses. With Daughter in school full time and depending on how her back is she might not be able to get a part time job for awhile.
So yeah, I do need the money to add to what it will cost us in additional expenses(food, electric which includes a/c and heat)to live here.  I'd rather not stop putting money away for retirement expenses like I do now but if I have to stop my Savings Challenge for awhile I can.
And until Daughter sells her house(the proceeds of which will go toward paying for college-the portion her scholarships don't pay)we will be fronting her money for college expenses too.  In the end we will get back what we spend on the college expenses but not on the living expenses.

All I can say is that Daughter is darn lucky her parents are careful with their money and in a position to help her and willing to give her a help with a fresh start in life.

How do I feel about all this?
Well, I've been in a funk most of the Winter over this.  I'd go so far as to say I've been depressed. Going from a nice quiet and peaceful household of 2+ to a household of 4+ and a dog is not something that was on my radar as we moved toward retirement.  And we really don't know her BF well so having a stranger living here produced some anxiety in me.  There are elements of my personality that are gregarious and outgoing but when I am home I am pretty introverted.  I need a quiet place to call home to recharge myself.
And my Daughter is somewhat high maintenance and brings the drama at time(plus her relationship with BF adds to the drama). We seemed to have a great relations once she moved to Louisiana. lolz

Add in that having them here until she is finished with school is also going to push back our moving out of PA timeline.  We had hoped to leave in the Spring of 2018 and relocate once we paid for the last semester of College Boy's tuition, but Daughter may not be done with her degree by then.  So we are stuck here until she gets that diploma.  Well we CAN move away but we can't sell this house until she's finished with school.

I have doubts about how this will all work in the end but I am willing to make changes in my life to accommodate them and their needs.  I hope we can avoid conflict and I am trying to stay positive about what will come.