I went up to Weis(PMITA)Markets yesterday to check out the instant sticker discounts.  Found some surprising good deals while I was there that didn't even necessitate that I bring any coupons with me.

I usually check out the Weis ad online which they release on Tuesday, and gather my Qs and see what Deals I want to get when they go live on Thursday.  But Weis' online site was down Tuesday and Wednesday so I went in without knowing what I was going to do....other than check for instant sticker discounts.

It wasn't the frugal-est of shops since I bought a snack type thing and sodas but things went aok. 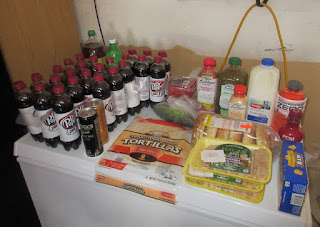 As usual everything was on sale(except the milk which is never on discount here in PA).

First I picked up a cuke and BOGO free grape tomatoes.  I also had a Weis Q they mailed me for .75¢ off the tomatoes.  I like to make a cuke and tom salad with a splash of Italian Dressing on it.

Then I found in the refrigerated case of healthy drinks a 50% sticker on a small POM bottle, as well as 50% off stickers on the 3 Bolthouse juices you also see in the photo.  Each Bolthouse juice bottle also had a hangtag with a $1/1 Bolthouse juice Q on it.  I don't usually buy these pre-made juice concoctions but for $.64, $1.49 and $1.99 each I'll be drinking some healthy juice/smoothie drinks this coming week.  The "Healthy Greens" doesn't look very appetizing but it's full of veggies so I'll just close my eyes when I swig that one down. lolz

Next it was over to the fresh meat counter but they didn't have any sticker deals today that tempted me, so I was off to the frozen foods case where I found Halal(kosher) chicken maple breakfast sausages with $1 off instant stickers.  These usually go for $5.99 a 14 ounce pack but were on sale for $3 a pack, after the $1 off sticker, they were $2 each.  I would have bought more but I don't know if Hubs will eat these(chicken for breakfast?loz)so I only bought 3.  I intend to open one up this morning and try them.  If they pass the taste test, and if the rest that had stickers on them are still there, I'll go back on today and scoop them up as well.

Following around the perimeter of the store I found those large burrito-sized tortillas on clearance for $1.50(only 1 pack left)and I got the milk over there as well.

I fancied some popcorn so picked a 3 pack box up that was on sale.  While in the drink/snack aisle I saw Powerade Zero drinks were on sale for .88¢ each so I bought a rare flavor I never see in sugar-free, Strawberry.  Then I had a craving for that good dark ginger-ale, it was on sale so into my cart it jumped.  Also a bottle of Polar Soda half & half was on sale so it accompanied the ginger ale.

I found a pack of in-store bakery made bagels for 50% off in the bread area and then nearby they had a display of that 1893 Pepsi I've seen ads for on tv.  It was on sale and they had a tear pad of coupons on the display(which doubled to $1 off 2 drinks)so I had to get one of each flavor to try.  I wouldn't buy this for the reg. price of $1.99 a can but with sale/Q I'll spend .75¢ a can to check it out.  Even if it's tasty I won't be buying it as a regular part of my shopping, but sometimes you have to break out of your comfort zone and try new things. 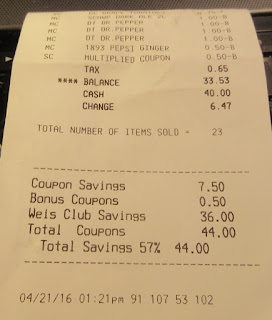 I'll be going back today for the Friday specials as they have some fresh produce on discount today only, including watermelon, strawberries and corn on the cob.  Dinner tonight might just be watermelon and roasted COC and nothing else.
Yah, I could go for that.......