So last Friday to Sunday Dollar General stores had a 50% off Clearance Sale.  Anything marked down as clearance was an additional 50% off.
This is the first time I went to one of these sales but go, I did early Saturday morning.  I might haven't gotten some better things(like toilet paper)if I had gone on Friday morning but I wanted to pair these deals with that "$5 off when you spend $25" Coupon in my digital Q account for DG stores.

I got the 5 air fresheners(car ones-2 single ones and a 3 pack), the .45¢ Renuzit and the $1.25 Glade candle for our use.  All the generic Airwick refills I picked up for my Sister in-law as she uses them in her mom's bathroom.  She buys them when she sees them cheap at yard sales but these were super cheap so I had to buy them for her and she'll reimburse me.  8-)
The garbage bags are for us as well.  $1.80 for a box of 25 garbage bags?  Couldn't say no to that! 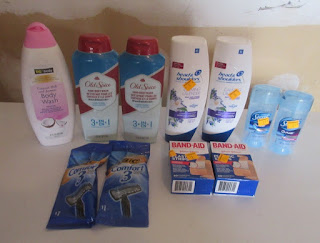 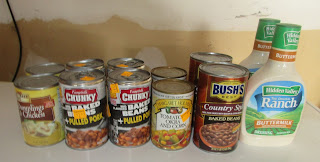 I got some canned foods, 6 cans of baked beans, 2 cans of a mix of tomato/okra/corn, 2 cans of dumplings and chicken and 2 bottles of buttermilk ranch Hidden Valley salad dressing.  The dressing is for Ex-College Boy' and the other canned goods were for Hubs when I go on this elimination diet and he has to fend for himself with cooking.
Some of this was a good deal, some not so much.  Many items were NOT marked so I had to keep asking for a price check.  Perhaps I'll try a different store next time instead.

Will I go and do a Clearance sale at DG again?  Maybe.  But I'll be a bit more discerning with what I bring home.

Have you ever gone to a Dollar General clearance event?

Sluggy
Posted by slugmama at 10:51 AM