Something in the Air

This post title refers to the big news here for this week.

Once we got the minivan hauled off(and taken off the insurance thankyouverymuch!)it was time to take care of another long delayed project.

Having the driveway repaved.

Hubs called a couple of companies Monday morning before a dental appointment and around 11am a guy shows up at the front door.
It's the owner of one of the companies he called.  They happened to be working nearby so he came over to give us a quote.

I called Hubs with the quote and he said ok, let's do this!

About an hour later, noonish, the guy is back with workers to prep the driveway.... 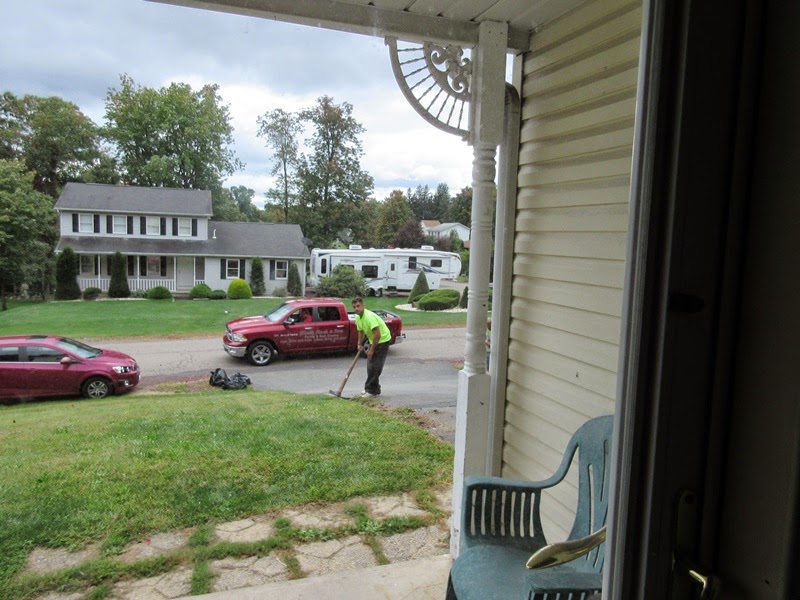 And then by 4pm they had finished with the job..... 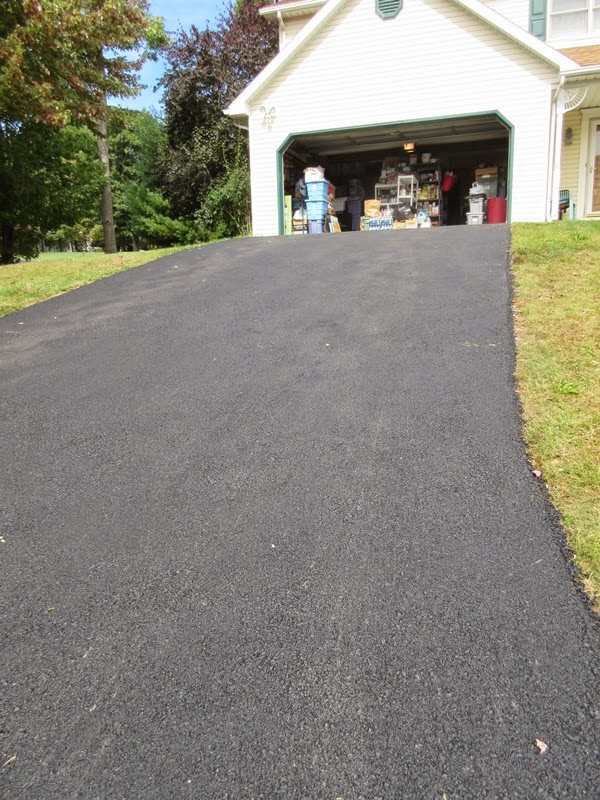 And now we have a nice new driveway with no holes, cracks or potholes.
Rah.
Of course the bank account took a hit for this.

Usually I pull extraordinary expenses like this from my previous year's Savings Challenge funds.
But luckily for us I didn't need to do that since we still have a big chunk of Hub's Bonus this year leftover.
Yes, it was a nice fat bonus this year.  8-)))

So the Savings Challenge for 2013 funds stay intact(and I am hoping they end the year that way so I can put them into permanent savings status).

I still can't walk into the garage without the lovely scent of asphalt in the air in there.  It should  dissipate after a few more days.

I sold some more fabric last week/this week which has lifted my mood.
I still need to straighten up the house a bit before the brother in-law arrives to stay for the weekend.
I got brownies made to take to the family reunion.

I've been trying to write up some genealogy information for my mother's cousins, who we will see this weekend.
Of course every time I go to do this, I get sidetracked.
Today it was an email from a woman who's ancestor I put a memorial and headstone photo of on F.A.G.
She wanted to know if I am related and what information I have to share with her.
I feel bad every time someone makes an inquiry like this because I usually have nothing else to share beyond what I put up on the F.A.G. memorial.
I was able to help this person today.  I found her ancestors immigration information....the ancestor and his whole family came in 1854 as a unit from Germany.  This confirmed information she had and gave her names/birthdates for all the family members(which she didn't have)and gives her a town name in Germany to inquire to about birth records and may get her past this previous brick wall.  I just hope she speaks/writes/reads German now. lolz
I feel good knowing the little bit I did helped somewhat.

I was able to track down a few ancestors to hang onto my family trees this week too.  I found some "died young" ancestors, who were never in census records because of this, buried with their parents on F.A.G.  I also found an allied family to my mother's Fosters, McKay, which I didn't know about before.

I did a bit of research on my father's side and found another branch, the Schwartzes.  My 2 x Great Aunt Adeline Bowman married a Schwartz and I found a Schwartz cousin(well not a cousin but the nephew of the husband of my 2x great aunt) on F.A.G.  He seems a nice guy but we really don't have much ancestral information the other needs.  He is in contact with the granddaughters of Adeline(another branch of his Schwartz tree)and they live in the area of New York state where my great grands lived later in life(which was when these granddaughters were growing up there)so I am hopeful he can find some kind of information on my Bowmans through them.  They had to have known at least my great great grands!


Ok, I am off.  I still have to pack, pick up rxs, feed the dog and prepare mentally for company tonight.

Sluggy
Posted by slugmama at 2:46 PM