The Great Moving Adventure.....Day Three, The End For Now

We had a lovely breakfast after a restful night in Tuscaloosa Alabama.  A brief stop to gas up the cars and for a coffee and iced tea at a nearby Mickey D's and we were back on the road on the last leg of our journey to our daughter's house in Louisiana.

Back on the interstate heading West into Mississippi.  Lots of truck traffic through MS(hubs almost got run off the road by one!)and we stopped in Vicksburg for late lunch/very early dinner at Popeye's then more gas at a Circle K near the Vicksburg Military Park and then over the Mississippi River to the first Louisiana rest stop to potty(us and the dogs)and eat.  Did I mention that is was upper 90's F still at every rest stop?  Should have done this trip in mid December for bearable weather. lol 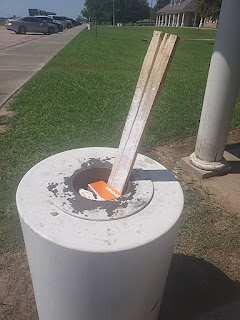 Explain to me(if you can)the piece of lumber mostly painted white sticking out of the trash can at the rest stop.

It was hot as balls with trucks parked all willy nilly at this rest stop where they shouldn't be parked but at least the mostly treeless rest stop had covered pavilions with picnic tables.  We ate, dogs pottied and watered and after a quick human pee break we were back on the road. 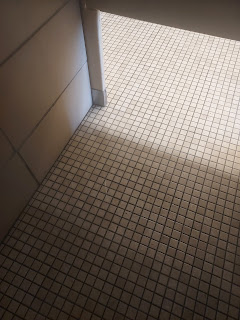 You can't make it out from this photo but the ladies bathroom had high tide in there. 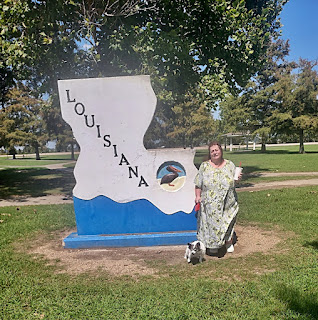 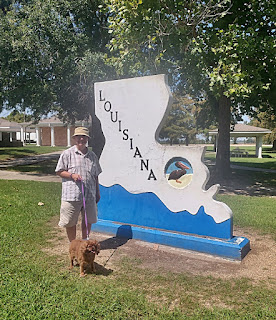 Hubs, me and the doggies had our photos taken in front of the LA sign at the rest area.  I sent one to daughter let her know we were in bayou(aka swamp)country now and would be arriving within 3-4 hours.

So we drove the last leg without incident, arriving at daughter and son in-law's house around 4pm.  We ate something but I can't remember what given it was 3 weeks+ ago.  We had to load our belongs into the house as well as the stuff for the dogs so that took awhile.

Thus we began our stay at daughter's house and sleeping on air mattresses for the foreseeable future.  I must say after two nights on those air beds we declared our aged bodies were too old for this shit. ;-)  But we were glad to be done with this part of our new lives.

Oh and here's my booty of found change from the 3 day journey South.... 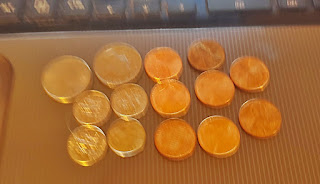 .98¢ total from drive-thrus and a bit of change from Hubs that he handed me(so I kept it).hehehe