Finding Ancestral Connections Among Your Friends


It amazes me how once you start digging into your family's past you find links to others. In particular that my ancestor knew or has a connection to the ancestor of someone I know now.

"Rivulet" over at $12 a Day blog is one such person.
She has a prominent direct ancestor named John Bidwell.  Bidwell was a soldier and pioneer and one of the first leaders, along with partner Capt. John Bartleson, of emigrant parties along the California Trail to settle the West. 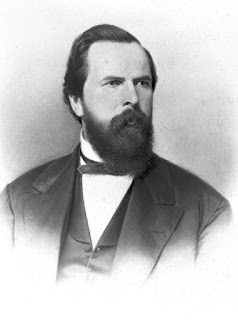 He was also a founder of the town of Chico, CA.  You may remember that Rivulet obtained some seeds for the Bidwell casaba melon, which originated in Chico, CA and this fruit variety is named for her ancestor, and Rivulet grew them to "fruition" last Summer. ;-)

Among the Bidwell-Bartleson party of 1841 that John Bidwell helped lead to CA was a man named Grove C. Cook.
The "Find A Grave memorial" for Cook's gravesite is HERE.

Grove C Cook was born in Kentucky around 1800. He headed West to California with the Bidwell-Bartleson Party in 1841.
Between arriving in California and purchasing land with a quicksilver mine on it in 1845 he worked for John Sutter in what is now Sacramento at his agricultural colony of New Helvetia(also known as Sutter's Fort).
While James Marshall, a carpenter who worked for John Sutter, was building him a water-powered sawmill on the American River near the Fort, Grove Cook was also working for John Sutter distilling whiskey on the New Helvetia property.
And then James Marshall found gold and word got out, amateur prospectors flocked to the area and overran Sutter's colony, destroying his dream.

But before all that Grove Cook was living in Callaway County Missouri where he met a woman named Sophronia Sublette sometime before 1825.

By 1837 Sophronia and Grove's marriage was on it's last legs, as Sophronia and their daughter Theresa were living in St. Louis with Sophronia's brother, William Lewis Sublette.  She repaid William by keeping his house and Theresa was attending school in St. Louis, the cost of which Uncle William was footing the bill.

On 29 Mar 1841 William supported his sister as she brought suit in St. Louis Chancery Court for divorce from Grove Cook.
Sophronia said that Mr. Cook, "....had been guilty of  gross and wanton ill treatment toward (her)....and (had) offered such indignities to said complainant, as to render her condition intolerable.....said Grove had, for more than two years past been guilty of an addicted to habitual drunkenness: That he had abandoned (her)....and refused to support (her)".
when Grove failed to appear at the July session of court to answer the charges, the judge decreed that if Grove didn't appear at the succeeding court session the divorce would be granted to his wife in his absence.  In October of that year, Sophronia was granted that divorce and she lived in her brother William's house after that time.

In May of 1841 Grove C. Cook was among the Bidwell-Bartleson Party that left for California and far, far away from St. Louis, Sophronia and Theresa. Cook was a last minute addition to this group of travelers to the West.  By the time the St. Louis judge granted Sophronia a divorce from Grove Cook he was somewhere traveling through the Pequop Mts. in North Eastern Nevada and far away from civilization.

From reading various memoirs of people who knew Cook personally once he got out West to California, it seems he was not what you'd call an upstanding citizen at times.  It seems he did continue to have a friendly/familial relationship with his ex-wife's brothers, Andrew and Solomon.  There is even an account that states that Grove Cook nursed Andrew back to health when he fell ill in California working in the gold fields.

There is one report concerning Grove Cook that goes...."a man of wit and generosity that went far to counterbalance some less desirable qualities".  I'd say....lol

Grove killed the son of a Walla Walla chief because he didn't care for the way the youth was bragging about stealing some horses.  This almost caused an international incident between the US federal government, Mexico and the Walla Walla Indian nation.

He also married again to Rebecca Josephine Kelsey on 28 December 1854 at Sutter's Fort.

Rebecca was born in St. Louis and was the sister of Benjamin Kelsey. Benjamin and his wife, Nancy Kelsey, had been members of the Bartleson-Bidwell party as well, along with Grove Cook.

Rebecca had come West in 1843 with her parents, David and Sarah Jane(Crozzart)Kelsey.  This group of the B-B party had branched off and gone to Oregon instead of California, first going to Oregon where Rebecca married William Henry Fowler in 1843.  Shortly after Rebecca, her Kelsey clan and William Fowler(among others)decided to go to California from Oregon and Rebecca sought to seek a divorce from Fowler upon arrival at Sutter's Fort in 1844.

At some point at the Fort, Rebecca caught Grove Cook's eye.
There are conflicting reports on whether Rebecca was granted that divorce(as the area was still part of Mexico so US laws had no juisdiction-Thomas Larkin had been appointed American consul to the area but he legally wasn't able to grant divorces on Mexican soil).
One source says Rebecca was denied so she went ahead and married Grove Cook anyway.....another saying she obtained the divorce from Fowler.  Bigamist or not a bigamist? Just pick whom you want to believe.  ;-)

Rebecca Kelsey married Grove Cook at Sutter's Fort.
After working for John Sutter  Grove settled in the Santa Clara Valley and became part owner of the historic New Almaden quicksilver mine.  Grove Cook it is said, fought during the Mexican war and was involved bringing US statehood to California.  He found and lost a few fortunes along the way, finally dying while visiting Santa Cruz in February of 1852.
Rebecca went on to marry Dr. Christopher Grattan before dying in 1871.

So what does this Grove C Cook character have to do with my family?

Sophronia Fullen Sublette is my 1st cousin 6 x removed.  Sophronia's Great Grandfather, Lewis Sublett, and my 6th Great Grandfather, William Allen Sublett were brothers.  Their father, Pierre Louis Soblet, who emigrated to the Virginia Colony with his parents in 1700 onbroad the Mary and Ann sailing ship, is our common ancestor.

Sophronia's grandfather, Littleberry Sublett, was a branch of my Soblet/Sublett family that moved away from Eastern Virginia into Kentucky and their descendants onward into Missouri and some onto points further West in America.  At some point this branch of Subletts began spelling the surname with an extra "e" at the end, Sublette.  But whether you go by Soblet, Sublett or Sublette it is all the same line. 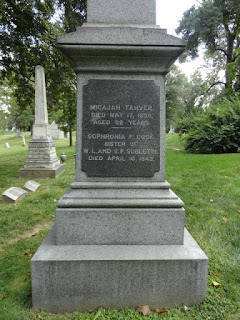 Sophronia died on 20 April 1843 and is buried in the Sublette family plot along with some of her brothers and sisters at the Bellefontaine Cemetery in St. Louis Missouri.  Seems she didn't live too much longer after divorcing Grove Cook.  She lived out her days keeping house for her brother William in St. Louis.

Grove Cook is buried in the Evergreen Cemetery in Santa Cruz, California.  I think being planted halfway across the country from each other seems right.