* Crazy weather!  Snow then temps up to 50F and now snow is on the way later night again.  AND it's suppose to hit 50F again this weekend....crazy and it's a wonder we aren't all sick!

* Last week the Brother in-law and Nephew's apartment had issues.  First their hot water heater sprung a leak and then their heat went out(both are gas appliances).  Nobody else had their heat out in the building but their unit.
So between nephew working and them running to the apartment to wait for workmen to show up they were living here for 2 days.  It's a good thing we had 2 spare beds right now, huh?
And that stack of pizzas I got for real cheap last week sure came in handy to feed extra mouths too.

If you hear a sonic boom at your house from the cartwheels I'll be turning, don't be alarmed. ;-)
This little episode has confirmed for me that once Hubs does retire he needs to find something to do away from the house!  Kim I just don't know how you stand it....*snort*

And moving to a one level house with a detached garage with an apartment space above it(meaning plumbing and electricity and heat)would be really, really peachy keen!!!
If I can't get him to be away from home with an activity at least with those accommodations I can persuade him to use that apartment space as his office/man cave/whatever and leave the house for hours at a time. 8-)

Even the Daughter has made comments that he is driving HER crazy and she isn't here for long stretches between part time work and school.  I am getting sympathy from her too about putting up with Hubs so I know it's "not me" here. lolz

* Besides just holding things together I've had a mission to reorganize our household files.
I've made great progress going through the files.
Here is pile of stuff I weeded out to pitch. 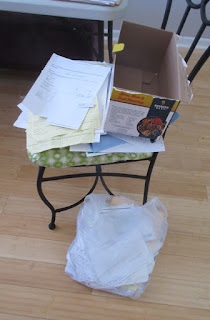 Here is a stack of now empty folders/hanging files. 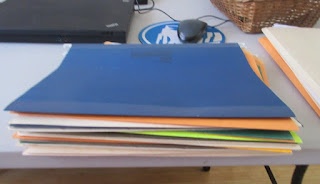 And here are the papers I still need to file. 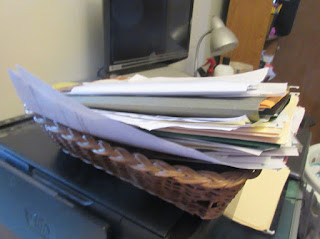 This has taken me weeks!  The filing is Hubs' job and I don't think he's filed anything in over a year!!!
Ugh.

* I also have been sorting things in the garage.  Since Hubs' accident in early December I haven't been vigilant about putting groceries away much, meaning there were grocery bags strewn about the garage.  It got to a point where it was a big chore just to find anything out there when it came time to cook, so since the weather has been warmer lately I've gone out there to organize and actually empty grocery bags and put things away on the shelving.

* I also took out shipping boxes that have been piling up since the Holidays and burned them in our fire ring on Monday.  That's been wonderful to get those things out of here too.

* We are suppose to get snow late tonight into Thursday morning.  Hubs can't shovel snow now so it falls to me and Daughter to deal with and we both have back issues so we have to take it slow and careful.  It shouldn't be too bad when she has to leave for school in the morning but then it falls to me to clear the driveway before she gets home around 5pm.  I see a fair amount of Tylenol and shoveling in my future for tomorrow.  8-(

We just have to keep our heads down and push through to Spring and keep on keeping on.

And now you are caught up on the doings at Chez Sluggy.

The January Giveaway is now OPEN!
Go HERE to enter.
Giveaway closes on January 23rd, Saturday at 11:59pm.
Good Luck to y'all!