*  Pay Bills--DONE  Everything got paid early or on time. 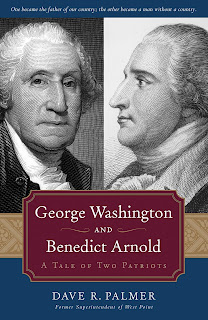 "George Washington and Benedict Arnold-A Tale of Two Patriots" by Dave R. Palmer
It's a more thorough history of the life of Benedict Arnold than any I have read before(not that there are many BA books to begin with).  It delves into his part in our American history and his intersecting history with another American Patriot that is revered today, George Washington.  You will learn many things in this book that I am sure, unless you are a American Revolutionary scholar, you didn't know and they don't teach in school about Benedict Arnold.
Did you know that George Washington thought Benedict Arnold was the best battle tested and valuable General in the Continental Army?  That had the Northern campaign of 1775 to take Quebec from the English of which Arnold helped spearhead had been successful, what was Canada at that time may have become America's 14th state?  Just a couple of nuggets of information contained in this book.
Written by a former Lt. General of the US Army and a past commander of West Point, the author Dave Palmer is well versed in and knows his territory here.

My take away from this-had Arnold's character been less flawed(who of us is perfect?)and there had been less backbiting and in fighting between and among the American military staff and the Continental Congress(even then the politicians added little to our progress!)would Arnold have become a turn coat?
It raised a lot of questions about how our history could have been different if certain dominoes hadn't fallen in the way they did.
Four thumbs up(if you like history). 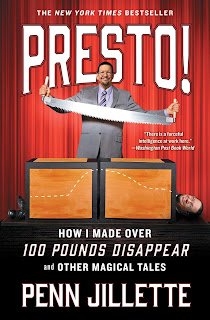 "Presto!-How I Made Over 100 Pounds Disappear and Other Magical Tales"  by Penn Jillette.
I love books by people who think outside the box and have a non-conformist outlook on life.  Jillette is funny as heck, profane and a Libertarian to boot so how could I NOT read this when I saw it at Ollie's(Good Stuff Cheap!)?!?
Besides anecdotal stories and ramblings about his life/outlook it's all about how, when faced with a life/health crisis he took his life into his own hands and make big health changes(and thus lost over 100 lbs.).  It pretty much spurned me on to take charge of my health and medical issues and attempt to make my own changes.
Even if you aren't contemplating health issues and changes it's a very interesting read.
Four thumbs up. 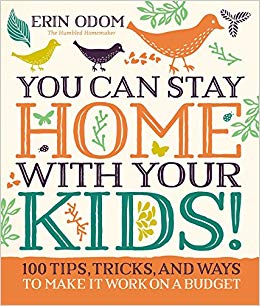 "You Can Stay Home With Your Kids!-100 Tips, Tricks and Ways To Make It Work On A Budget" by Erin Odom

This book took me a couple of hours to finish as there wasn't much new information here.  the author runs a blog which is highly subsidized and commercialized(her husband quit his job to help run the blog so it has to furnish a living for their family).  I don't fault her for her blog, she is doing what she has to do to make it profitable.  I just don't think her blog has much in the way to help someone else stay home with their kids.
The title-about making it work on a budget-is silly. Of course you need a budget to make this career choice work, unless your name is Gates, Rockefeller, Vanderbilt, etc. and money is no object. lolz

She has filled her small book with what would be a starter's guide to being able to afford to be a full time homemaker/mother.  If you are young and wanting to be a stay-at-home-mom, this book may give you some food for thought on the subject but there is nothing really new here.
It was not applicable to me in my season of life.
I give it a one thumbs up.

I got off my a$$ and got this done in April finally with Hubs' help. 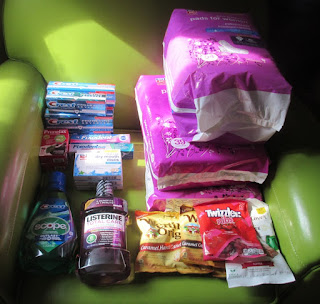 This food bank takes toiletries, laundry detergent, paper goods, etc. too so
I loaded them up. 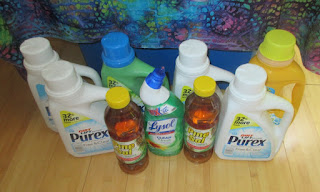 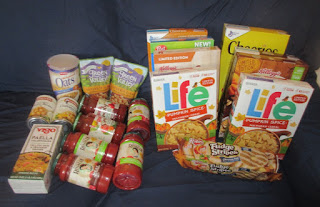 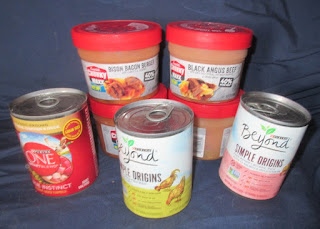 Some soups and even canned dog food 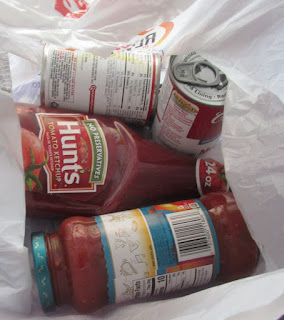 A few more items I pulled from the stockpile.

*  Take Food Bank Donation--DONE
We were able to take it in surreptitiously this time.  The doors were unlocked as there was some sort of Lenten weekday service starting when we went so no having to get buzzed in.  We got to be Anonymous this time.  ;-) 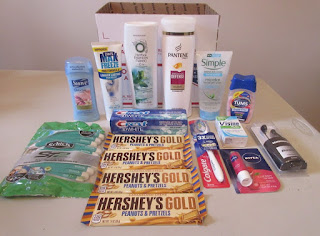 One giveaway for non-winners 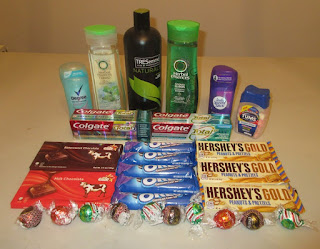 And one for previous winners and/or folks who brought in new readers.

*  Mail Giveaways--DONE  All mailed and received.

*  Work on Health Goals--DONE  I've been fine tuning what I eat and am preparing to go on an Elimination Diet of sorts later this month.  I need to "restart" my metabolism both to reduce my weight and to deal with diet issues with my HS condition.  We are ready to start this adventure once Daughter leaves on the 19th. 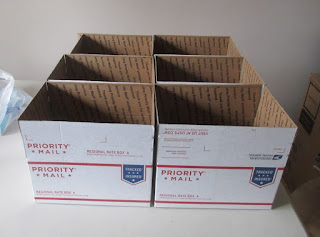 And 6 months of giveaways ready to go!  I have since filled another 3 boxes too. ;-) 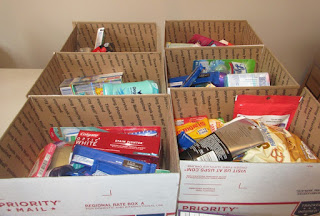 *  Plan Home Projects Timeline--SORT OF DONE
It's impossible to plan EVERYTHING that needs doing at this time so we have planned out(and time lined)the first 4 or 5 projects with the steps necessary to completion arranged in order.
These Home Improvements/Repairs will be ongoing for a while.
The first items to complete are.....1-Daughter's ex-bedroom, 2-Ex-College Boy's ex-bedroom, 3-Hubs man cave room.  Also involved will be moving items out of the master bedroom and walk-in closet and once those are moved the master bedroom and closet to can addressed.  Sluggy's big ol' game of Dominoes begins!

*  Email a Company--DONE
On the way back home from SC in late March we stopped in Chambersburg, PA for a late lunch at a Bob Evan's(love me some Bobs).  Our waiter was really GREAT(the right mix of personable/friendly/above competent)! I got his name and made a point of emailing the company about him and what an outstanding job he does.  I did get an email back from Customer Services.  Here's the bulk of what they replied.

"How nice of you to share such kind remarks about Terrance!  It is always an encouragement to our employees when they receive positive comments from our guests.  Your compliments have been shared with the restaurant and the director of operations so proper recognition can be given."

I hope that "proper recognition" included some financial recognition(not just a pat on the back).   They would REALLY NOT want to loose him to another employer.  I hope they thanked Terrance well.

Also contacted was Rite-Aid Corporate about a candy bar I bought down in VA that looked like this when I opened it........... 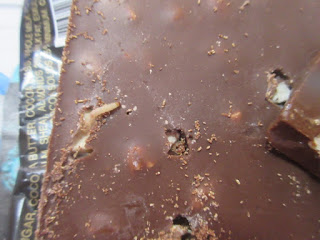 That white thing on the left in the bar is a MAGGOT!  The holes were were it had eaten out the almonds in the candy bar while sealed in the package.
ick

I did a chat w/a CS person online and they said a "team leader" would contact me.  The next day an asst. manager of the store where I bought this called to apologize and said I could get my money back if I came into the store.  Well, I live 375 miles from that store so I said no, I can't come in.  SUPPOSEDLY they were going to contact me again and mail me a check.  That was about a month ago and I have heard nothing.


*  Purge Garage--SORT OF DONE
We went through everything out there and pulled out all of Daughter's crap(except for the dreadmill)oveer the course of April.  It's sitting in my living room waiting to leave now. yay!
We still need to finish purging the rest of the stuff out there over the course of the Summer.

*  Clean Garage--DONE
Well it WAS clean but then Ex-College Boy started cleaning out his room and he's strewn stuff out there.  Once we get around to purging the rest of the garage the cleaning will happen in earnest.

*  Dental Appt.--DONE
Teeth are cleaned and checked and no cavities.  Go me. 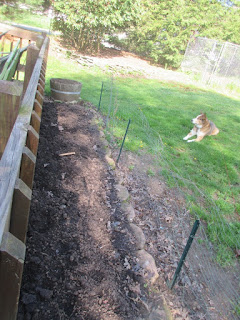 We picked up more top soil in April.  We raked a bunch of leaves into the fire pit and once the ashes were cooled we put them in the garden bed. The bags of fertilizer I got last Fall at Walmart for $1 each were mixed in with the ash, top soil and all was tilled.  A photo of the result with Cinnamon the dog supervising pictured above.
The planting will happen in the coming weeks.

*  Cash in Savings Bond--DONE
Bond was presented for redemption the first trip to the bank we made last month.  No point in keeping the thing once it matured, right?  Get it somewhere else it can earn interest again.

*  Purge Q Envelope--DONE
I always purge the coupon envelope(the one that accompanies to the store)either at the beginning or the end of the month.  The Q inserts on the shelf didn't need purging in April but will get purged in May.

In the end it was a pretty successful April and we ticked off lots of items on our list.
Did you get a lot done on your To-Do List in April?  Tell us about your successes!


Sluggy
Posted by slugmama at 9:35 AM