All Three are DONE!


My brother arrived on Thursday to attend Daughter's graduation. 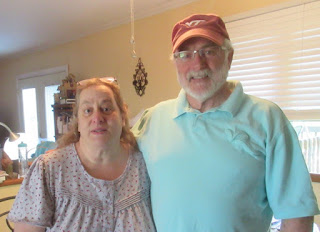 On Friday Daughter said she was getting an award(she had told me about this a month ago)and the ceremony was that afternoon.  She had said before this that it wasn't a big deal and she didn't want us to go so I had just filed the info in my head.  Suddenly on Friday she said she wanted us there.

So we gussied up and went downtown to the school's theater. 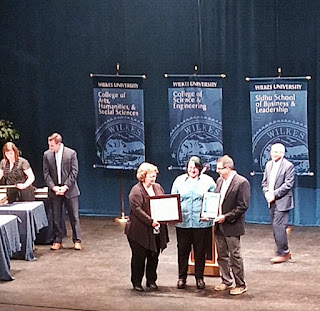 There were three Chemisty awards and she won one!  She was awarded the Outstanding Research Award in the Chemistry department.  She is with her professors in this photo, Drs. Bradley and Mencer. 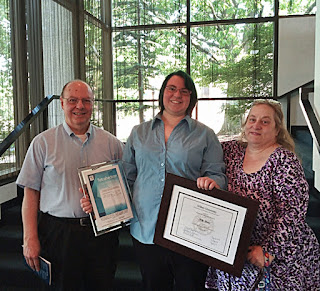 Since there is no Master's/PhD programs at her school she was able to do research and attend and present at professional conferences as an undergrad.
One of those research papers she co-authored/presented was written up in a professional Chemistry journal and was also featured on the front cover of the journal. (That's what she is holding a framed copy of in her right hand in the photo.) 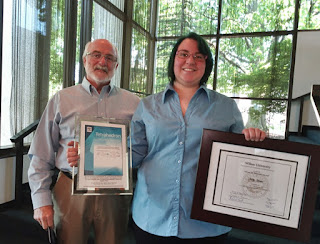 Here she is with her Uncle.
This Award also came with a check too.
Her "this isn't a big deal" thing turned out to be a big deal after all! lolz

We had some errands to run(and Daughter went out with her friends)then it was home to make dinner. 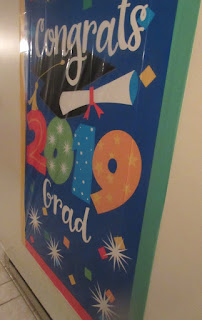 I picked this poster up at the Dollar Tree on the way home.  The only place we had wall space for it was in the front hallway(since the living room/dining room were a disaster with all her stuff packed in there.
Daughter's Boyfriend arrived late Friday night.

Everyone was up early on Saturday for Breakfast and it was a busy, busy day after that. 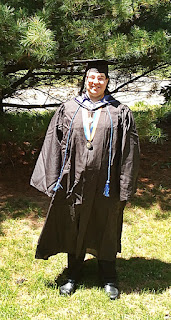 Here she is all dressed before leaving for the ceremony.
The BF had driven with Daughter and we met him outside later about half an hour before the doors opened.  The line snaked through the handicapped parking lot next door.  On the way to get into line my brother and I both spied a gold ring on the ground but he beat me to picking it up. lolz
We finally got inside about 45 minutes after waiting in that line so I got a bit sunburned as it was a gorgeous sunny day. 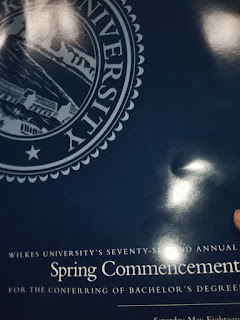 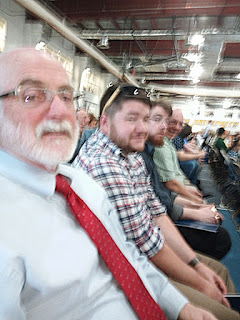 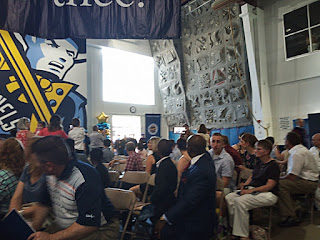 The graduating class and professors processed in from the door right behind us but I couldn't get a picture of Daughter but I did get the school banner as it came in. 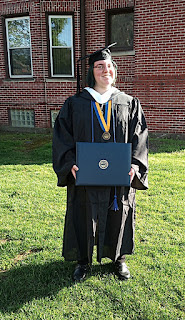 After 3+ very long hours on crappy seating it was finally over and we took photos outside. 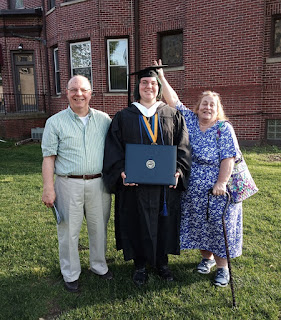 Can you tell I am happy and proud(and also giddy at the thought of getting my house back?!)? 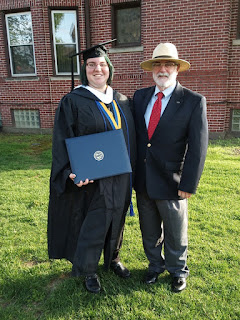 A pose with her Uncle. 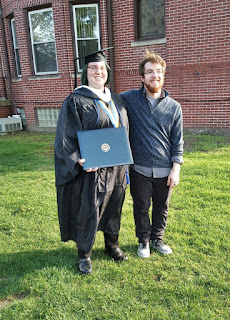 And her little brother.  Daughter use to torment and tease him mercilessly when they were younger.  But now, I reminded him that he can hold it over her that he got his degree at 22 while she didn't get one until she was 27. 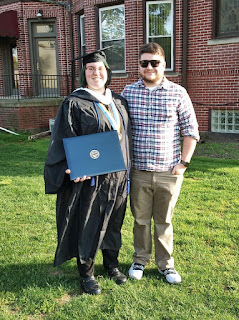 And finally with  the boyfriend. 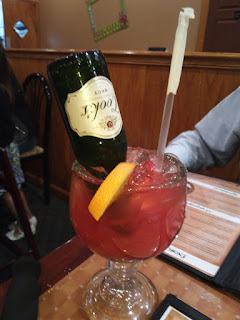 We hightailed it over to the Mexican restaurant for dinner as we all were starving.  I splashed out $10 for this fancy drink(Daughter drank TWO of these since we were paying. lol).
Dinner was low key and I don't remember much of it after drinking this on an empty stomach. lolz 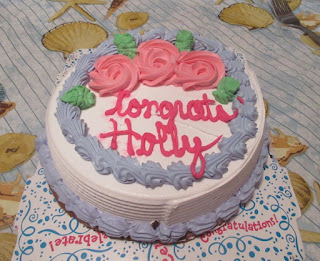 Then it was home for ice cream cake and champagne and presents.  We gave her the requisite Graduation Check like both her brothers got.

Sunday morning it was leftovers for breakfast as Daughter and BF had a long drive to TN........... 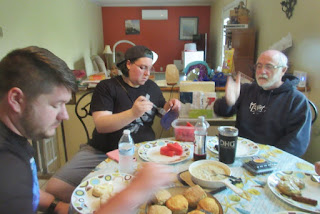 I had her pose by the poster before leaving..... 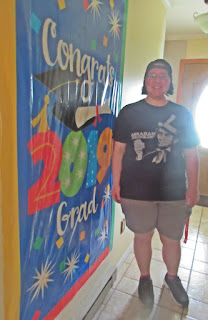 All the goodbye hugs were done and it was time to get into the car.
Cinnamon was very excited for her car ride with mommy and daddy........ 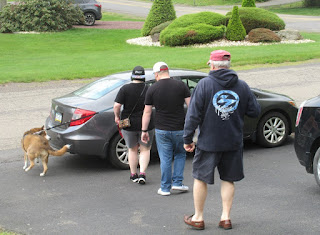 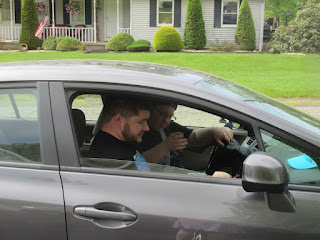 And then it was all over and Daughter and her dog were gone. 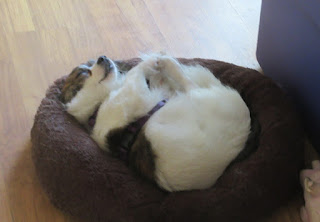 And a few hours later Chester was conked out and recovering along with all the humans in the household.

Then Monday morning my brother hit the road back to Virginia.
But not before posing with his new little buddy Chester.......... 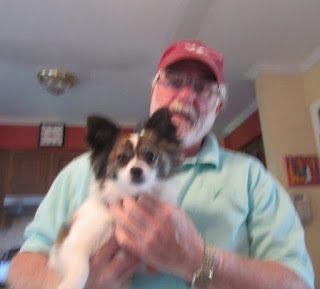 So now it's back to taking control of my house again.  Daughter and her dog(and the BF for awhile)were here one month short of the last 3 years.
Three years but for a good reason and now she's edumacated and onward to the rest of her life.
Will I miss her?
Yep.
But it's time for her to spread her wings and fly.

And Hubs and I are officially DONE with educating our children(and mostly paying for it too).
FAFSA can KISS MY LILY WHITE FAT ASS AS I NEVER HAVE TO DEAL WITH THEM AGAIN......PRAISE THE LORD!!!!!!!

Email ThisBlogThis!Share to TwitterShare to FacebookShare to Pinterest
Labels: all 3 kids are finished with school, Daughter graduates, fun weekend