Thanksgiving of Days Gone By 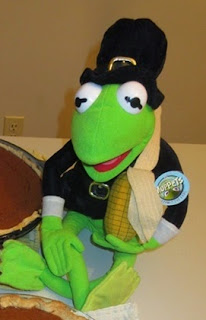 I was reminiscing recently about the Thanksgivings of my childhood.
Since my father only ate a small range of foods, the bounty on our Thanksgiving table was very predictable.

There was always a whole turkey. 'Nuf said.

There was stuffing, not dressing or filling.  The stuffing was always shoved into the bird and a small auxillary pan contained whatever didn't fit into the bird.
A few times my mother put oysters into her stuffing as she dearly loved oysters.  I don't believe she told my father when she put those into the stuffing. ;-)
She didn't do a cornbread stuffing(even though she was a Southern gal through and through)because again, that is something my father wouldn't eat.

And potato rolls made using Great Aunt Ollie's recipe.(My mother actually got her to write down the recipe before she passed as Ollie didn't have any recipes, except in her head.)

Side dishes-There was always rutabaga(known up North here as "orange turnips" by many). My father turned his nose up at rutabaga but with plenty of other foods to partake of, mom got to indulge one of the foods of her youth anyway.
Sometimes there were green beans(I don't recall a green bean casserole affair however), sometimes corn and sometimes sweet potato casserole(no marshmallows!).

There was always jellied cranberry out of a can.  We didn't go in for fancy pants whole berry relish or anything like that.

The preferred drink was unsweetened iced tea, usually still warm from being made, with ice cubes in your glass.  I miss that mix of warm and cold swallows of tea from the glass.  The thought of it takes me back to Thanskgiving.

The dessert was pumpkin pie with a dollop of real whipped cream or Reddi-Whip on top.  Sometimes there was also pecan pie(but generally that only appeared at Christmas).

Everything was made from scratch by my mother(except the jellied cranberry "glop").  The only concessions to convenience foods was the "glop"and sometimes the aerosol whipped cream and the veg may have been out of a can(back before frozen veggies were good).  No canned sweet potatoes, no gravy in a jar and no pre-cubed bread(I still remember having the job of toasting all that bread and tearing it up for the stuffing. lolz)

I guess you could say we always had what's known as a very traditional American Thanksgiving meal with very little variation.

Given Hubs will eat almost anything and we both have a wider palate than my father(most anybody but a 5 year old child has a wider palate), my Thanksgiving menus, though fairly Traditional at it's core, has expended a bit to include different side dishes, more pie types and even smoking the turkey one year(nobody cared for that treatment much here so it didn't ever happen again).  We also trade-off each year between Great Aunt Ollie's potato rolls and Great Aunt Lula's dinner rolls(a recipe mom got from her Aunt Lula after I was grown and passed down to me).

So it's over to you dear readers.......what are your food memories of Thanksgiving?
Let's share our recollections.

On that note, I hope everyone is with the folks they cherish tomorrow(or at least in your thoughts and prayers if circumstances keep you apart)and y'all can celebrate Thanksgiving in the way that gives your life meaning.  8-)))

Sluggy
Posted by slugmama at 10:14 AM

Email ThisBlogThis!Share to TwitterShare to FacebookShare to Pinterest
Labels: Thanksgivings in the past, turkey day, what Thanksgiving means to you, Wishing you a happy Thanksgiving