Sometimes I think about that silly children's song, "I Am My Own Grandpa" when I consider my maternal ancestry.

Seems like I am always running into branches that double back on themselves.

This Overby line goes back to John Overby.  Before 1860 his middle name was given as Wesley, perhaps named after John Wesley, one of the founders of Methodism.
Currently no one has the definitive answer to where John was born....some say England, some say North Carolina.  All the records that can be found have him living in Wake County, North Carolina his entire life.....except for during the Civil War.
Family oral tradition is that John had a small plantation in North Carolina before heading off to fight the Yankees.  He was a POW for 4 years and had a hand crippled by a musket ball.

John Overby came home after the war to find his property had been confiscated and his 1st wife was dead.  Indications are that the wife, Catharine Cunningham Overby had died around 1855.  The 1860 census seems to support that Catharine died prior to 1860 as John and 4 children are listed in the same household in 1860, but no Catharine.  This means that John lost his wife about 10 years before the war.

After the war John Overby married again, to Elizabeth Frances "Betty" Cannada or Canady.  John also gains a new middle initial, "D." and many speculate that the "D" stands for David or Davidson.
John and Betty went on to have five children-twin sons Charles David and John David, Rosanna, Robert Clingman and William Burton. 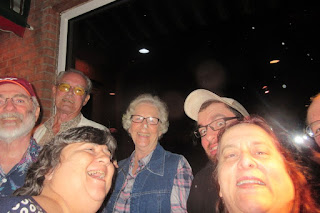 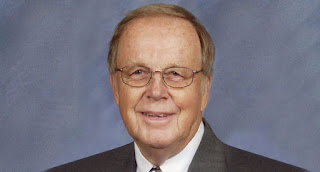 While noodling around on my maternal grandmother's side of the family, I was filling in another of my mom's cousins' branches.  Mom's mom, my grandmother Lillian Vassar Harper had a sister Rosabel Vassar(my Great Aunt)who married Raymond Foster(Raymond is also related to me not only trhough marriage but directly through my 3 x Great Grandfather Wesley Baxter Foster, so my 2nd cousin 2 x removed).  Their second child was Hilda Janet Foster. 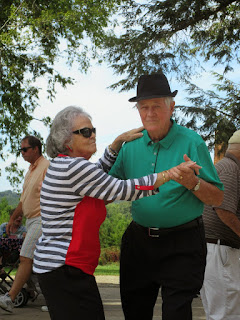 Hilda dancing with her cousin's husband back in 2014 at the Family Reunion.
Hilda passed away in early 2016.
Hilda and my mom were quite close as children and remained close throughout their lives.

Hattie's parents were Martha Chitty and Charles David Overby.  Charles David was one of the twin son's of none other than John Overby and Betty Cannada/Canady.
This makes me relate by marriage to the same Overby family through Hilda Foster, my 1st cousin 1 x removed.
So through my maternal grandfather AND my maternal grandmother lines I am related by marriage to the same Overby family line.

John's father was Cleveland Mason Harper.  Hmmmm, I already had Cleveland Harper's father, Richard Washington Harper on my tree but it's not "my" direct Harper line.

Every time I find an answer it leads to new questions.  ;-)

Any interesting discoveries in your family tree lately?