The  "Kids Do the Darndest Things" Edition-- 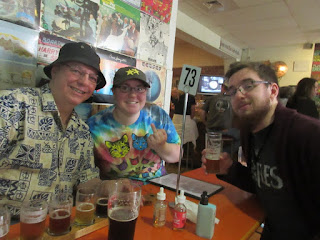 Took Hubs out for Father's Day to one of his brew pub favs.  This was also the first time we could take College Boy and he could drink as well.
Had my glasses off and took a photo and didn't notice until I downloaded the photo from my camera that Daughter had given me the finger.
Do they EVER grow up?!? lolz

Onward to the meal planning!

Here's what was planned last week--

And this is what actually happened--

Last week saw 7 nights of home cooked dinners....2 nights of Leftovers and 5 nights of new meals.
The Rigatoni w/Meat Sauce moves to this week and the Romaine will get used for a Caesar Salad sans chicken to accompany steak instead.

My savings percentages last week was 52.63% which brings the month's percentage to-date to 60.67%.

Leftovers going into this week.......Roast Chicken and Veggies.  Not much leftover this week.

This week will see 6 new meals cooked, 0 nights of leftovers and 1 night of Take-Out/Eating-Out.  Daughter is cooking again this Friday.

What I need to buy for this menu? Well we hit Maine Source and Price Chopper yesterday/Sunday to stock up on fresh produce/veggies, steaks and lobster.  I only buy lobster when they hit $5.99 lb. here(which is only a couple times a year during the Summer). I found $4.99 lb. Sirloin strip steaks so bought 3 od those too.  These two trips put another $100 onto my food spending for June.  Yes, the total is quite ugly now. lolz
But then again, I'd rather spend it now and get it for cheap while the deals are to be had and be overstocked rather than have to spend it later and pay more.

The only item I need now for these meals is some rice as we are all out.  I think I need salad greens, a cuke and some feta cheese too for lunches but otherwise I won't be spending anything else on groceries until July.

What is getting fixed and served at your house this week?

Was last week's plan successful, did you go off plan or did you not even plan what was going to be eaten last week?


Sluggy
Posted by slugmama at 8:38 AM

Email ThisBlogThis!Share to TwitterShare to FacebookShare to Pinterest
Labels: changing the meal plan, make a menu to guide your meals for the week, meal planning, overspending the food budget