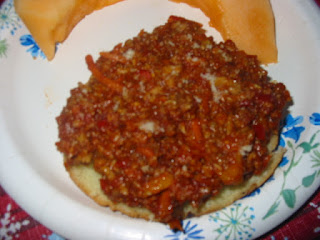 Manwich and other brands of Sloppy Joe Sauce contain the equivalent of 430 mg of sodium per 1/4 cup(which is about how much you'd consume eating 2 Sloppy Joe sauced sandwiches).  That's equivalent to 18% of the recommended sodium consumption per day for a healthy adult.

The American Heart Association recommends we all take in 1 teaspoon of sodium or less per day. That's about 1,500 mg for the entire day's sodium consumption.

If you make your own Sloppy Joe Sauce you can lower how much sodium is in your sauce.
There are many sites with lower sodium SJ Sauce recipes.  Most of the lower-salt recipes use ketchup or tomato sauce but those ingredients contain sodium.  I found this one using tomato paste instead and liked it.  I found this recipe 3 years ago and don't recall where, so as to give credit, sorry.
.

Brown your meat and onions and/or other veggies you put in your meat mixture. (I use red or yellow bell peppers and sometimes grated carrot.)Add all ingredients above and mix well.Wait 5 minutes until hot and serve.

This sauce can be made up double or triple batches and frozen for later use.

This recipe comes in at about 267mg per 1/4 cup(or 165 w/LS Worcestershire Sauce) so saves you about 50% off the sodium in the canned sauce.

If you aren't this concerned with lowering your sodium intake this much you could substitute ketchup for the tomato paste(but cut out the brown sugar from the recipe as ketchup has sugar in it already).

Reducing sodium intake is always good for you but some people need to gradually lower the sodium in their food intake to make it stick as a lifestyle change.

Sluggy
Posted by slugmama at 9:30 AM