My oldest son, the history nut, will be coming home for a visit at the end of June and to take part in a high school friend's wedding ceremony.

It's too bad he won't have more time as I wanted to take him on a short trip to Virginia, to where many of our ancestors lived.  Hubs isn't interested in going as he isn't "into" family history/genealogy, even his own family's!

June 25th of this year marks the 150th Anniversary of the Battle of Staunton River Bridge.
This was a crucial win for the Confederates at that time, as the successful defense of that bridge and the railroad line there, kept the supply line open to the Confederacy and troops in Richmond and Petersburg and delayed the end of the War of Northern Aggression.

This battle was part of the Wilson-Kautz Raid by the Union to try to destroy supply lines.
After 3 days of Union raiding forces tearing up the Confederate rail lines, they were stopped in their "tracks"(pardon the pun)by the forces assembled at the Staunton River Bridge near Randolph VA, over the Staunton River.
You can read more about this specific battle HERE.


Captain Benjamin Lyons Farinholt and 296 Confederate reserved troops were warned of the approving Union forces to Charlotte County VA.  Fairnholt sent out couriers into the adjoining counties to muster up volunteers to come aid the troops in holding the bridge.
Fairnholt also ran trains non-stop on the rail line there so it appeared to Union spies in the area that reinforcements were amassing in great number to confront the advancing Yankees.  In reality only 642 reinforcements arrived-150 regular army and the rest were comprised of old men and young boys from the surrounding communities.
They successfully held off 4 attacks of Union forces that were 4 times their size. 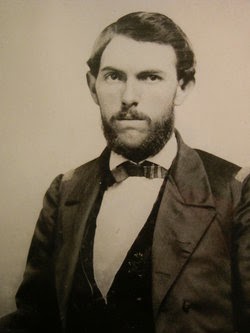 Benjamin Lyons Farinholt, born 1839 in Virginia, he attended Randolph-Macon College. Farinholt, enlisted July 1861 as a 2nd Lt., 53rd VA Infantry Regiment.  He saw action during the Peninsula and Maryland Campaigns, at 2nd Manassas, and was captured at Gettysburg (July 3, 1863).  He spent 7 months in the POW prison on Johnson's Island, Ohio before escaping and making his way back to Richmond to reenter the war in May 1864. He was regimental Captain by June 1864 of the 53rd VA, when he defended the Richmond & Danville Railroad at Staunton Bridge with a troop of wounded veterans, reservists and old men and boys from the area.  At wars end, he was a 26 year old Colonel, C.S.A.  He died 24 Dec. 1919 and is buried in West Point, VA


This Battle was the only one fought during the Battle Between the States in Charlotte County VA and it was fought near where many of my mother's family's ancestors lived in the 1860's.

Unless your ancestor was a regular Confederate soldiers it's very hard to find or prove they took part in this battle, other than oral history or written personal journal entries of participants or their family members.

So far in my digging, I have only found 1 ancestor that is proved to have been at the battle that June day in 1864. (Though in the partial list of the regular troop roster there are 4 or 5 men with my family's surnames who I may be related to as well, but is not proved yet.)

I found a memoir written by my 5th Cousin 1 x removed.  In it he recounted that his Great Grandfather, Lafayette Hale Mason, Sr. was among the defenders of the Staunton River Bridge the day of the battle.  The story was handed down in his family's line.

Lafayette Hale Mason, Sr. is my 2nd Cousin 4 x removed. Lafayette Mason was born sometime between 1816-1820(according to census records) and died in 1890.  At the time of this battle, he was in his mid to late 40's.
In the 1860 Census he is shown living in Charlotte County Virginia with his wife Judith Irvin(Irvine) and their children John, Susan and Lafayette Jr.  He was a farmer. At any rate, this June, the weekend of the 21st and 22nd there is to be a commemoration of the Battle of The "Old Men & Young Boys" in Staunton River Battlefield State Park.  I would have liked to have gone to the descendants medal ceremony to be present as the service my ancestor(and probably more ancestors that I am unaware of at this time)performed for Virginia and the South was recognized and acknowledged.
And watching the re-enactors and the cannons being fired would have been cool too.

And I think my son would have gotten a charge out of attending as well.

Email ThisBlogThis!Share to TwitterShare to FacebookShare to Pinterest
Labels: ancestor who defended the Confederacy, Battle of Staunton River Bridge, Lafayette Hale Mason, WAR Between the States