I also went out on Tuesday to look at that property I talked about last Sunday.
The realtor was late(whatever)but we got a look inside the church.

Here's a shot of the outside front with the steeple.  The steeple looks to be in good shape.  The building is sided in aluminum and really sad looking.
There is a white aluminum awning over the front of the entrance as well as over the basement entrance. 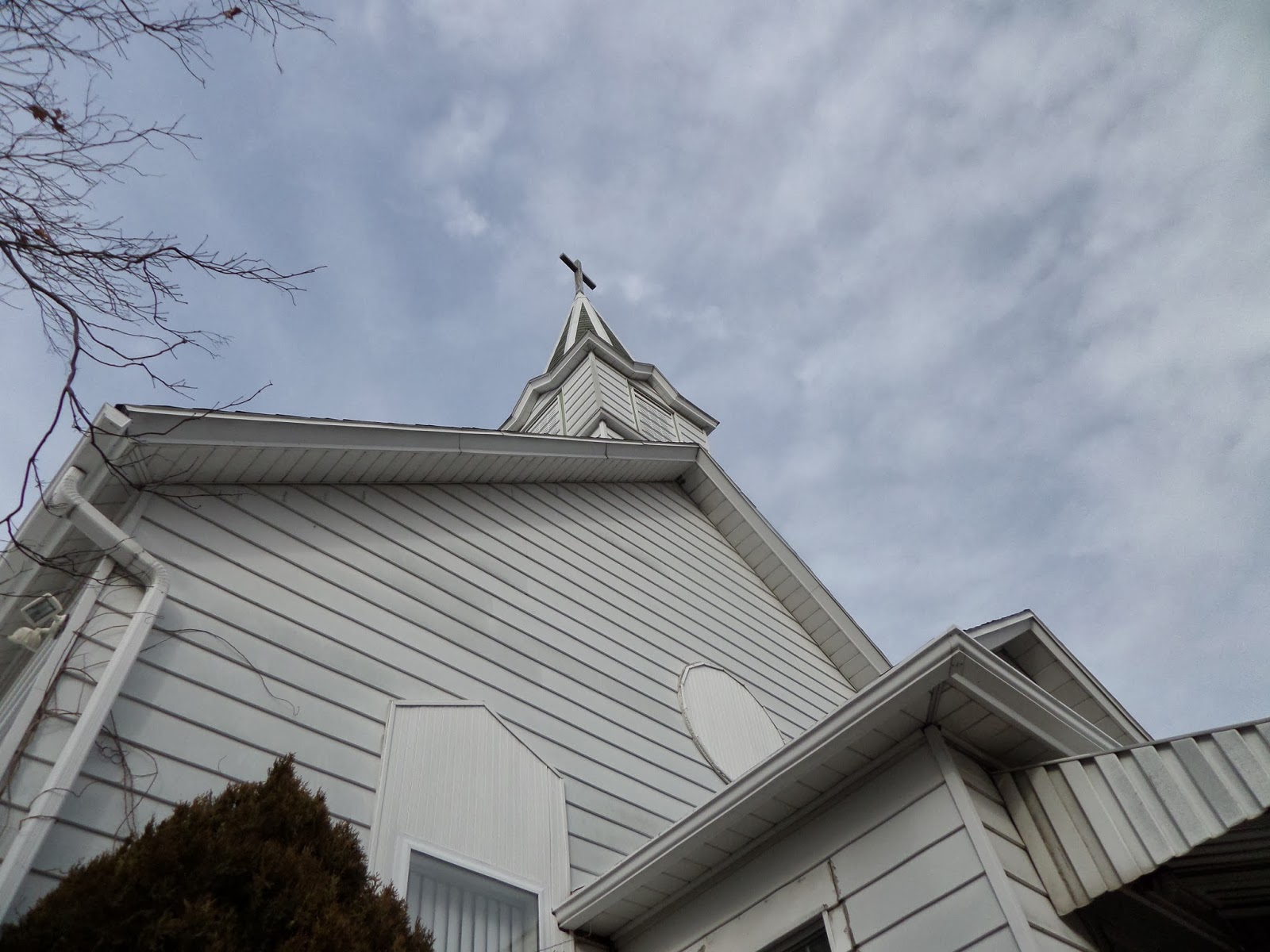 Behind the altar was oak woodwork on the wall and framing the two doorways to the vestment room.... 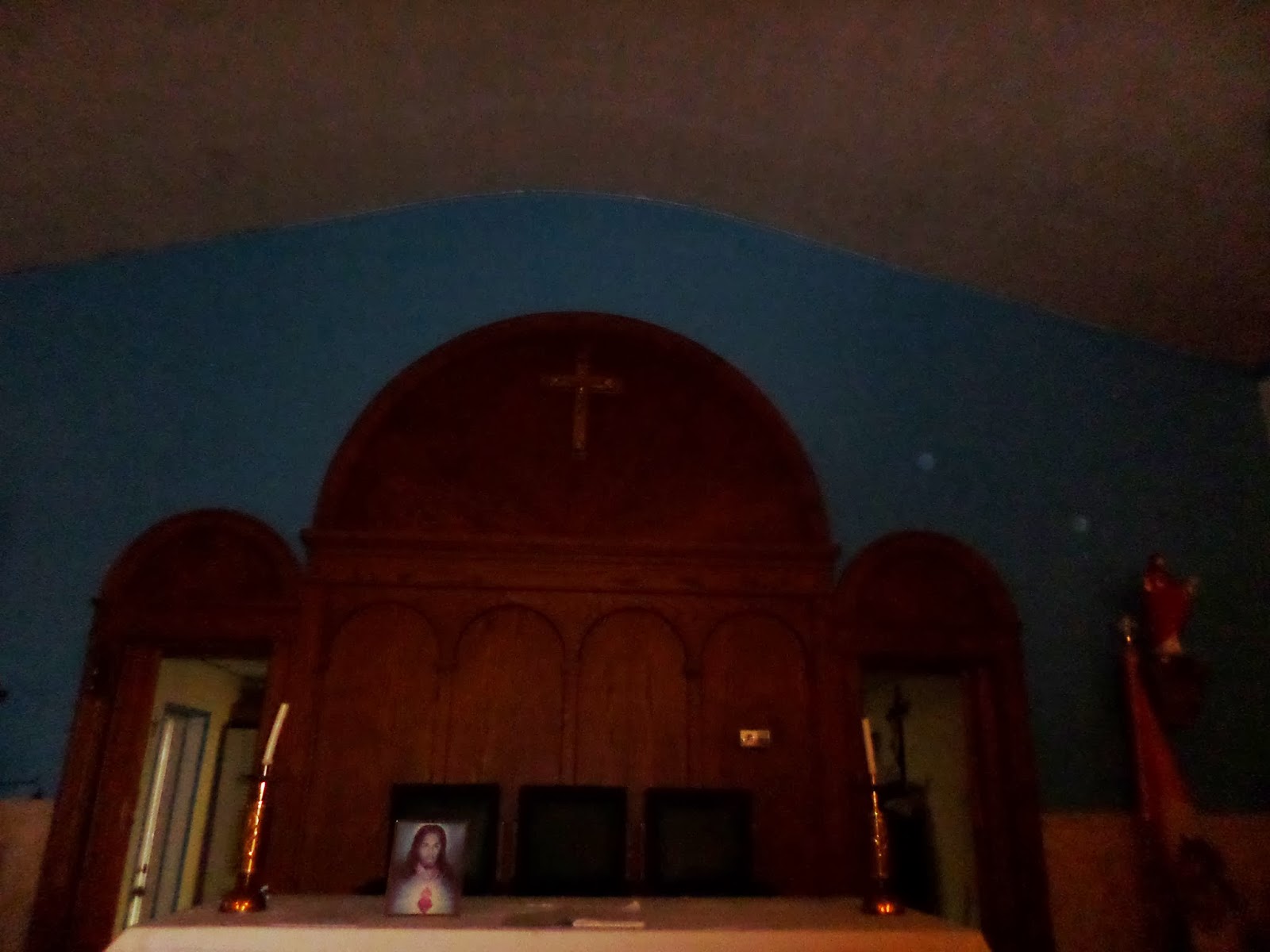 There were still 8 pews in place and all the original large hanging lights.  Also 2 ceiling fans.
The ceiling beams weren't exposed but plastered over but still 12 foot high.
The alter area is raised up but the floor configuration under the carpet is unknown. 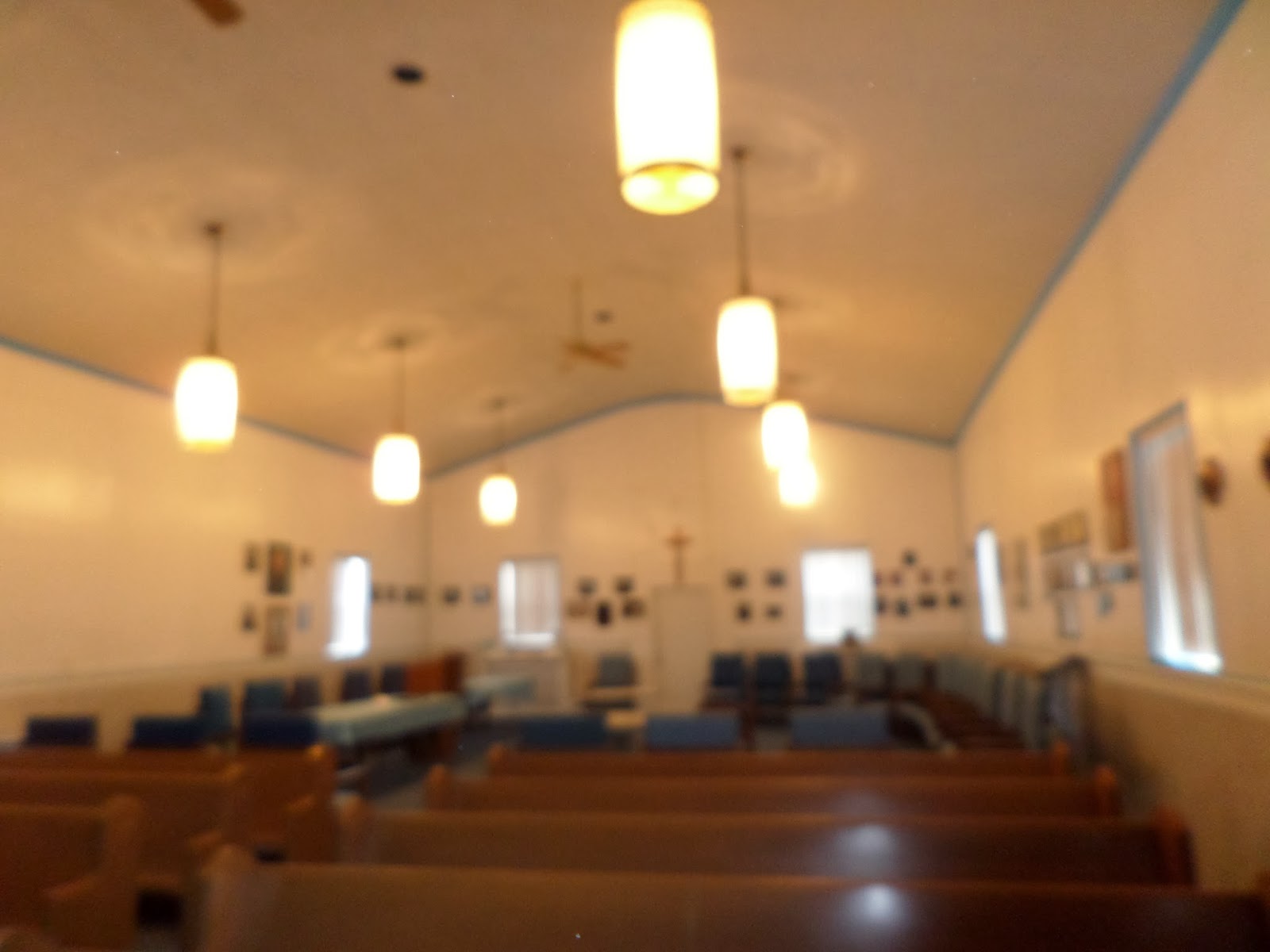 The basement has no inside access from the church.  You have to go outside and enter from the side of the building. 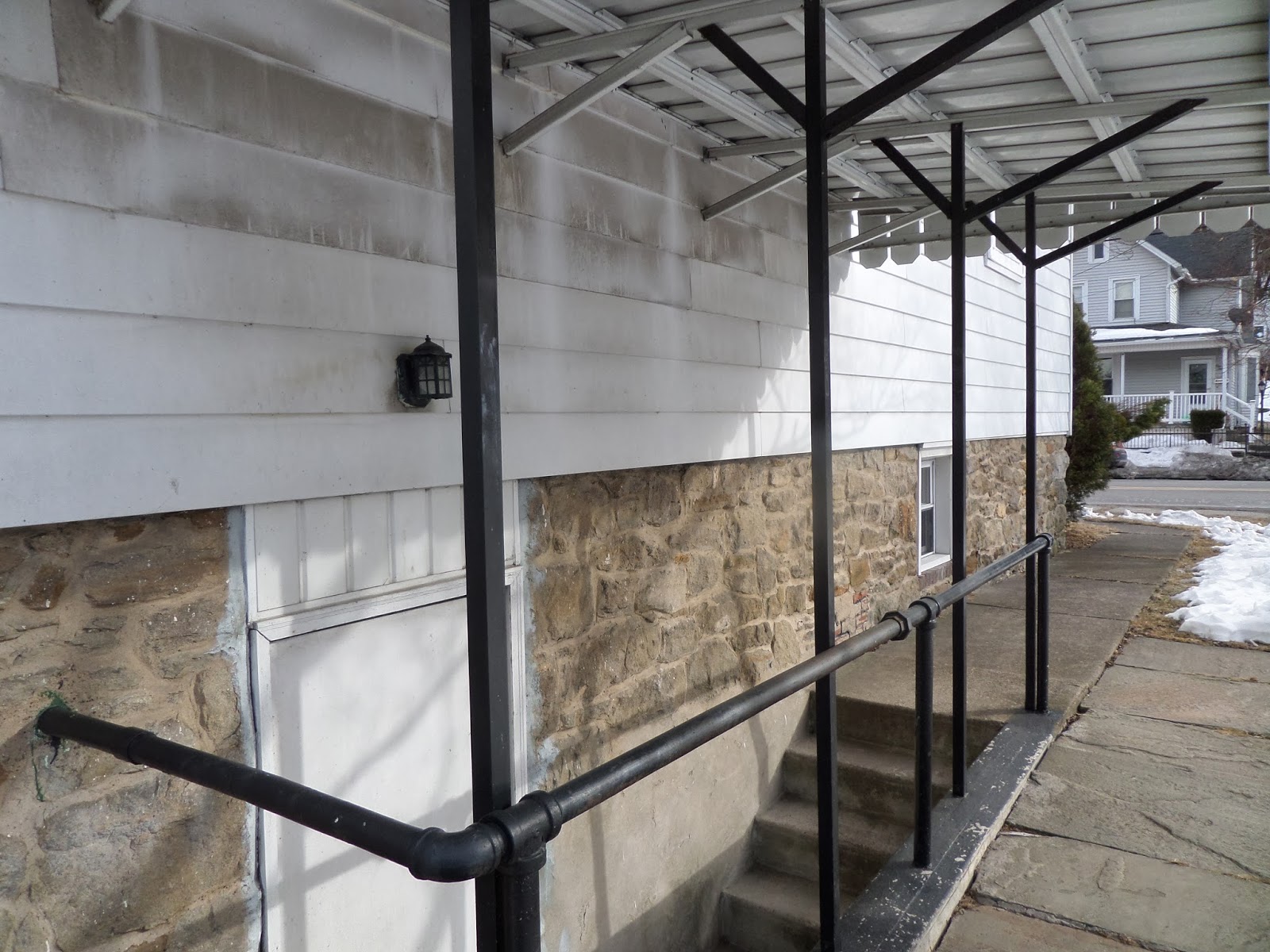 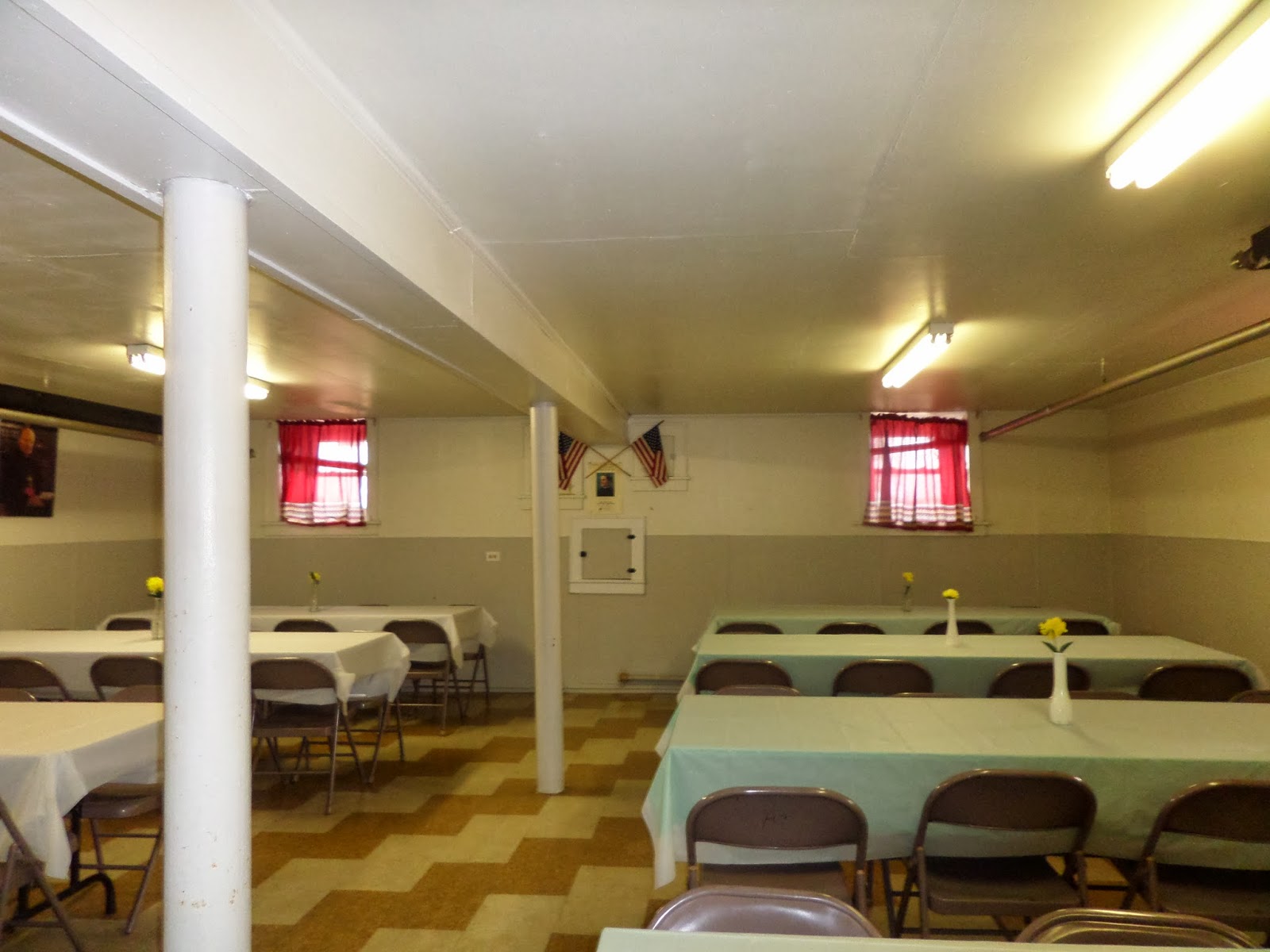 There is a kitchen area walled off in the basement.
Wouldn't you love to have that 9 burner commercial gas/propane stove? 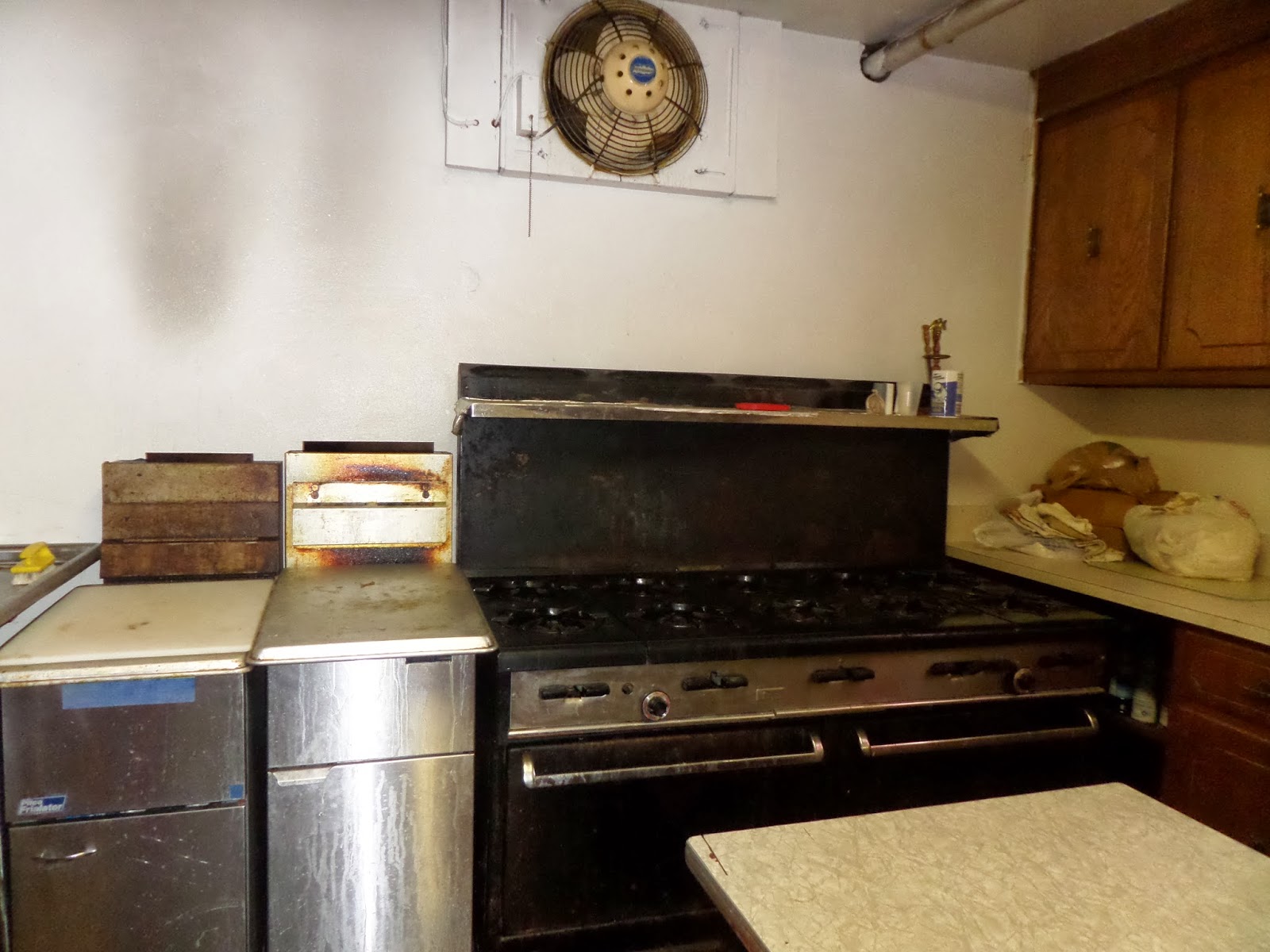 There were also 2 powder rooms in the basement, as well as a powder room upstairs in the vestry area.

The foundation is stone and the heat is oil.  I am NOT loving the heat source.
There was once a back access from the basement but it's been walled in but the concrete stairs are still there.  Not sure on whether it's feasible to redo the back of the basement/vestment room and make an inside access from basement to main floor.

This church was built in 1888 but basically seems solid.....but not being a professional in the building trade, what do I know? ;-)

The roof is newer and in good shape.  Flooring under the carpet is unknown, probably wood but probably not a quality/grade you could do anything with.
The front church doors are just commercial grade double doors and glass.  No wooden or fancy doors here.

I've talked to our insurance guy and he's working on some numbers.  He doesn't have a problem with writing a policy for it as he's written one before for someone who turned another church in another town into a home.

Now about the rectory house next door.......

The realtor wouldn't even let me go inside it.  He says he doesn't have the key.  They put no value on the house as it's been abandoned for years.  I suppose they don't want anyone going in it because of the risk of injury(falling through floors, ceilings and plaster walls buckling/falling, etc.).  That I can understand.
But if someone is seriously considering buying this property, you'd need to let them see it, no matter it's present condition, right?

This sort of turned me off.
Knowing if the house is rehab-able or needs to be demolished is a big deal to me!
If it can't be rehabbed then I have to spend $10K or so to have it torn down once I've bought the property(as the Seller is NOT going to have that done), so that would affect how much I'd be forking over to get this place up to snuff and thus affect how much I'd be willing to pay for it all.

So I got as close as I could to the house and snapped some photos..... 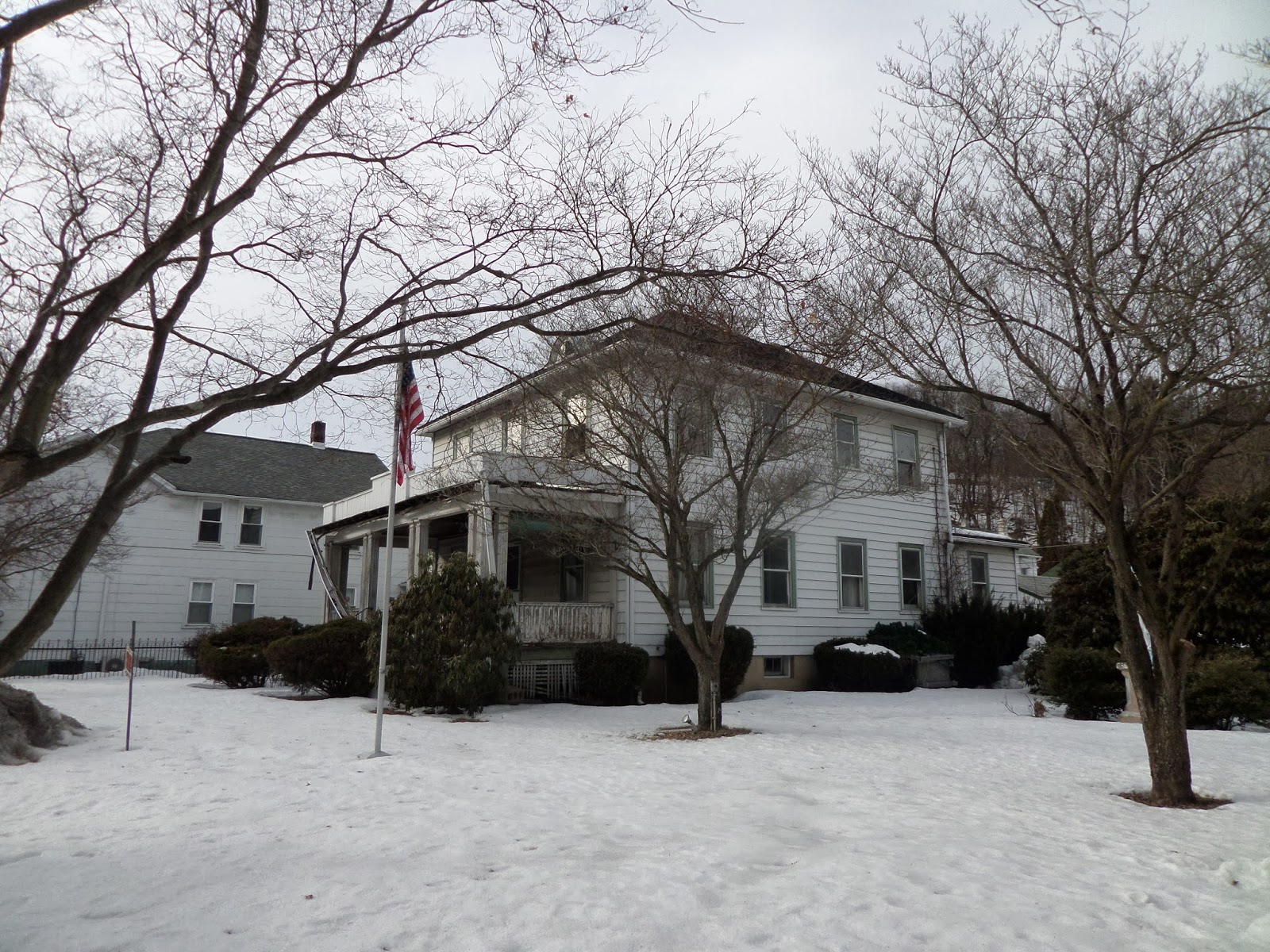 It's a large 2 story home, built in the 1930's so it might have "great bones", plus it's a classic style of home.  There is a balcony on the 2nd floor over the front porch but the porch roof is in very bad repair. 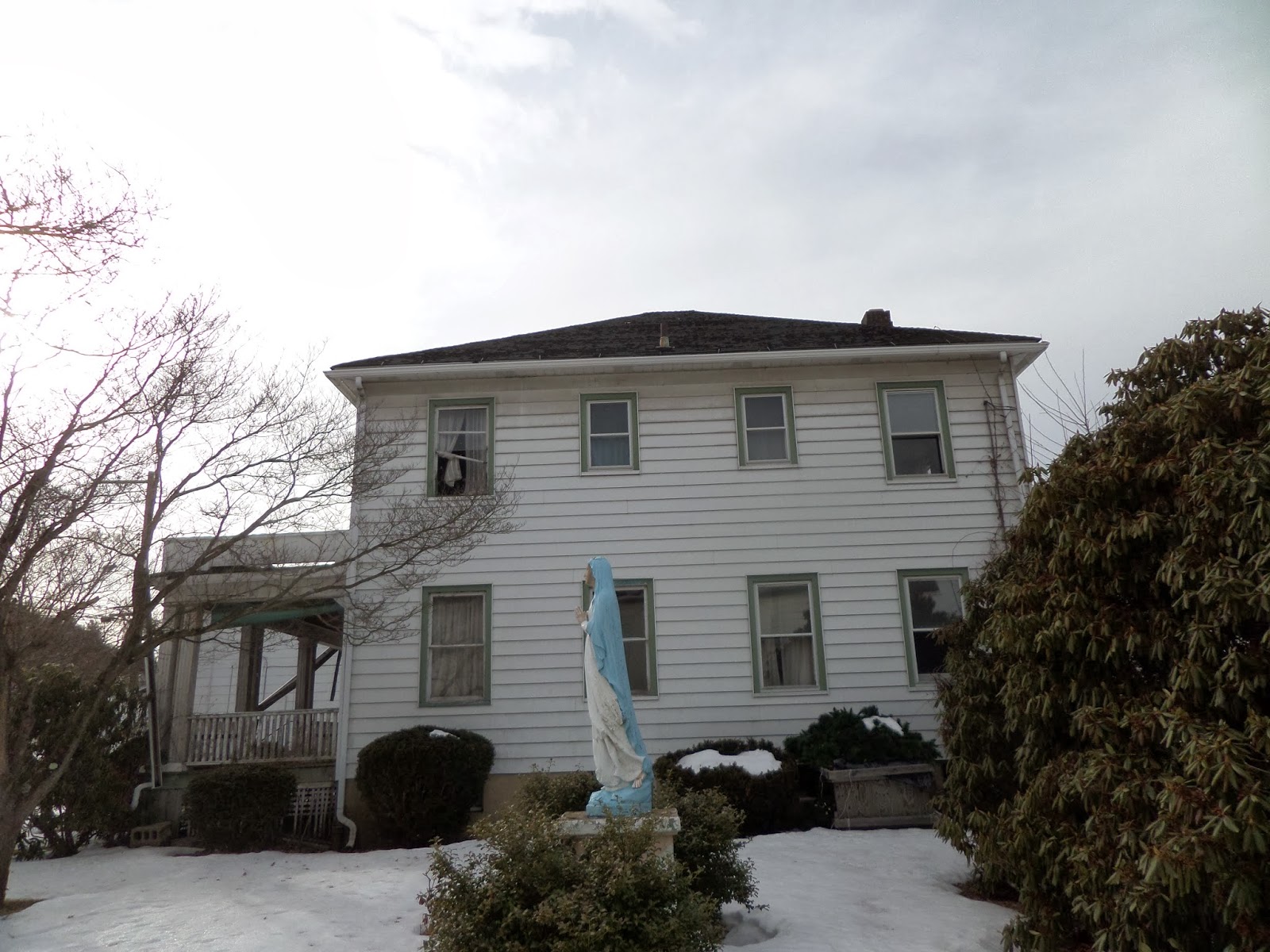 Unfortunately, though you can't make it out from the photo here, there are 3 missing windows on this side of the building.  No clue how long they have been broken and no one had even attempted to cover the openings with plastic or plywood.
I suspect there is a lot of mold inside at this point due to rain and snow having gotten in.  Perhaps it's a toxic mold situation now which raises red flags on even being able to rehab this house.  Plus the roof on the house is in bad shape and needs immediate replacing.

There is a lovely hedge of rhododendron in the right of the photo, which acts as a fence to hide the back of the property where the makeshift parking lot is for the church.
There is also a 1 car detached garage back there directly behind the house..... 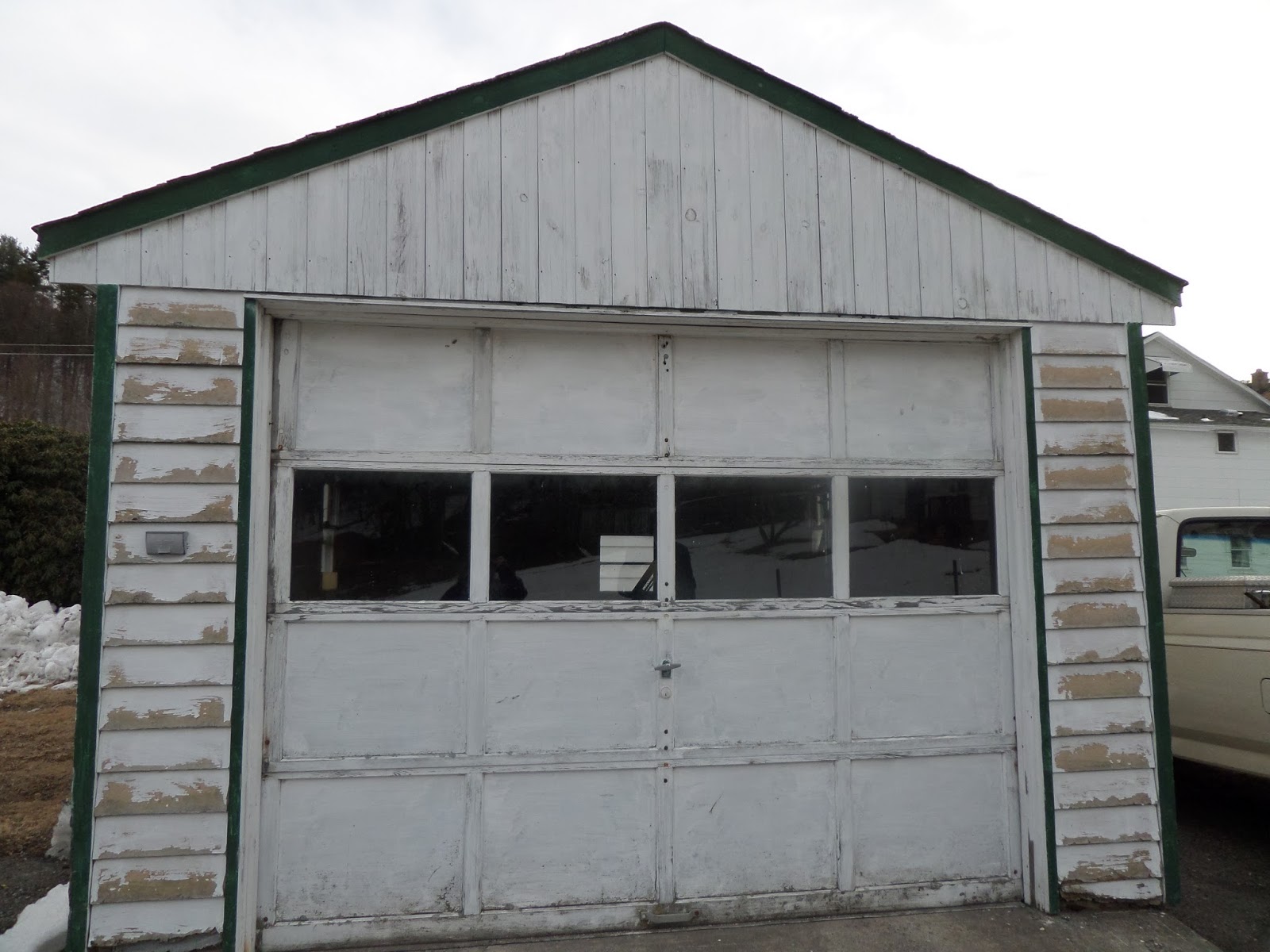 It looks like it was put up in the 40's or 50's(one of those Sears and Roebuck kits?) and it's wood and in desperate need of a paint job.  The roof also needs replacing and there is rot along the side bottom exterior wall.

Besides the problems with the rectory house, getting the church itself into a configuration to be a home would be challenged.
There are 3 toilets and sinks-1 upstairs and 2 downstairs(as well as a sink in the basement kitchen), but no tub/showers.  So plumbing would have to be changed and moved unless we want to cook and clean ourselves just in the basement.  Possibility to expand the powder room to include most of the vestment room to make that a full bathroom with tub/shower.

Besides the plumbing changes(and there are some very old pipes in this place)and perhaps changing the electric wiring, there is the problem with oil heat.  I envision massive solar panels on this church(a great building for those as it's oriented east/west!)but changing the heating source is another expensive proposition.
Plus there is asbestos covering pipes in the basement.

The foundation looks solid but the chimney(where the heating is vented out of)probably needs work(cleaning the flue and pointing the bricks at least).

The earth opens up without warning and swallows things up decades or even a century after a mine has been closed.
It's a big problem around here.

From what I can tell from the little research I've done so far, the Breaker and the mine tunnels, which ran right under the center of this town are all west of where the church and rectory sits.
I can't find anything definite that states there are no tunnels deep underground of where this property is located so there is that uncertainty.
It would not be a good thing to buy this, rehab it and then have the ground open up and swallow me up.
Nope.

Plus Hubs is not totally on board with this plan.

Just so many questions and possibilities.
And Hubs really doesn't want to be a landlord when he retires.
I thought we'd rehab/rebuild the rectory and have one or more of our grown children move in, but you just don't know if they could find decent employment for themselves and their significant others around here.

So really nothing has been decided yet but it's not looking hopeful.
Sigh

Having these facts, what would you do?

Email ThisBlogThis!Share to TwitterShare to FacebookShare to Pinterest
Labels: buying property for retirement, not a perfect scenario, turning a church into a home