So we boarded the wooden Schooner Alert on a grey day that threatened rain.  We were the only customers for that cruise.
The day before they had a full capacity of 28 passengers.

This ship began life as a tall ship called TALL COTTON.  Built in York, Maine and launched in 1992, she changed hands in 2006 when a fisherman bought her, renamed her ALERT and set out to use her for commercial ground fishing and research.
In 2013 ALERT was purchased by a husband and wife team, the Davis'.  Along with their ketch TEVAKE the Davis' run windjammer cruises around Bailey's Island and the Casco Bay waters to the public, as well as offering school student educational excursions and are affiliated with a non-profit organization called Tall Ships Portland(part of the Tall Ships America)that train the youth of Maine sailing and life skills during sea adventures. 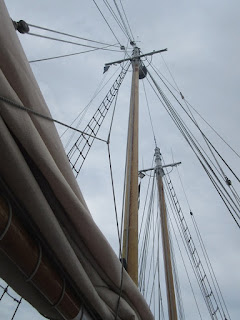 Though the captain said they hadn't have any wind to speak off for about a week, he and his crew woman hoisted the sails anyway but had the engine ready to go if the wind stayed calm. 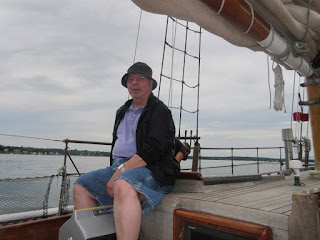 Who is that fellow guarding the adult beverages? lolz 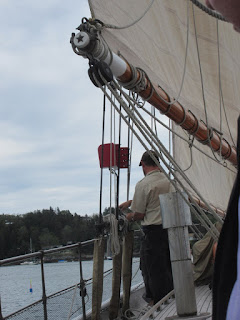 And as we cast off the breeze started blowing! 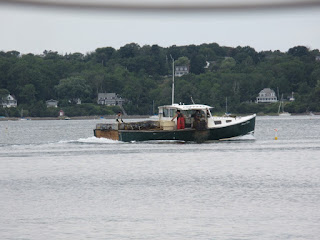 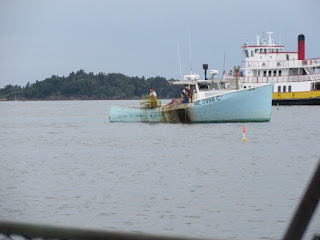 Another lobster boat with the Casco Bay passenger ferry in the background. 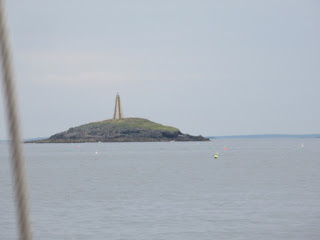 One of the many small islands offshore from Bailey's Island.  This one is called Little Mark Island.  The monument was built there in 1827 and is now operated by the US Coast Guard.  A beacon was installed on the stone monument in 1927.  It is solar powered and supplies are stocked in the base to aid shipwrecked sailors. 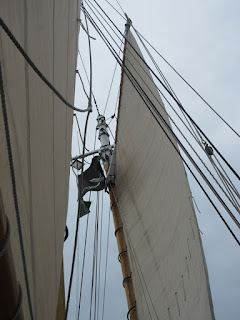 Another shot of the sails from below.  I could look at this all day. It was so quiet out on the water without an engine roaring. 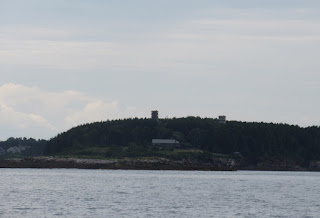 Two old derelict lookout towers from WWII when submarines German submarines were on the prowl in the Atlantic. 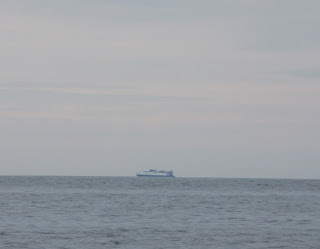 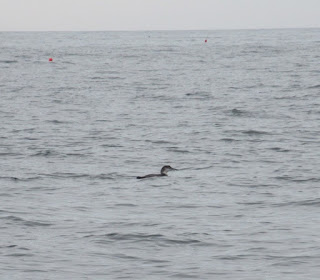 I caught this shot of a loon before he dove below the surface again in search of food. 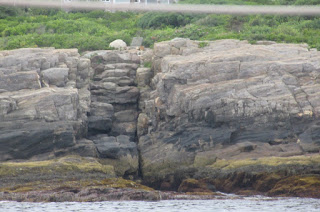 This is the "Giant's Steps on the other side of Bailey's Island from the dock where we cast off from.  It's a rock formation that resembles a set of stairs made for a giant.

The winds died down when we got to this side of the island so we had to sail back with the aid of the diesel engine. 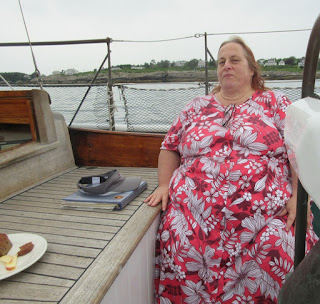 The crew mate set out a snack plate of fresh apple slices and homemade muffin type bread(made by the captain's wife). 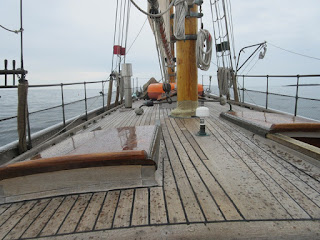 The last hour of the sail the rain began that had been threatening all day. 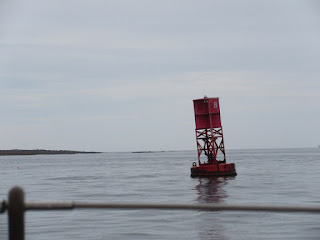 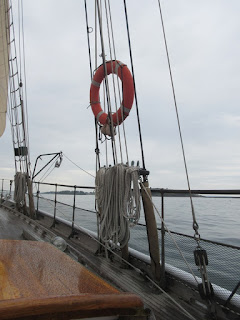 Wooden ship decks are quite slippery when wet.....take my word for it. 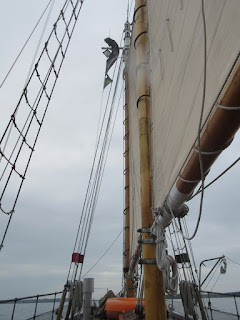 The captain, a fine fellow pushing 40 years has been making a living on the water for many years. It was interesting to listen to his tales of crewing boats all over the world.
He also knew a fair amount of family genealogy so of course, that set me off! lolz 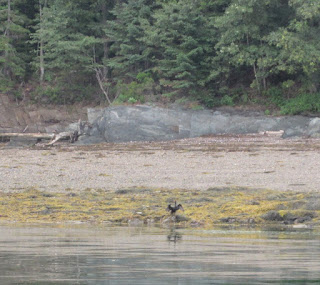 The bird off the shore there looked like a cormorant.

Back to the side of the island where the cribstone bridge connets Orr's Island to Bailey's Island at Will's Gut. 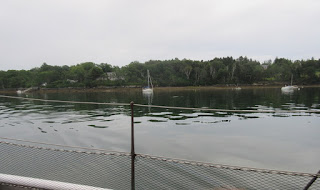 The captain said someone famous use to have a house on this shore(Edna Saint Vincent Milay I think?).  As we passed the shore closer than this shot, someone came out of one of the houses(a big modern one with a high deck/balcony, not a cottage)and waved to us and took video of the schooner and said they were happy to see a "real" boat out on the water. 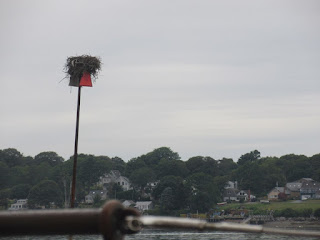 Another channel marker with what is probably an osprey nest on top. 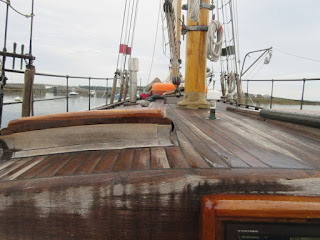 Even with an hour of drizzle and then steady rain I resisted going below deck to get out of the cold rain. 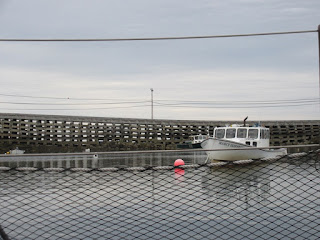 The historic cribstone bridge(the only one in the world) linking Orr's and Bailey's islands. 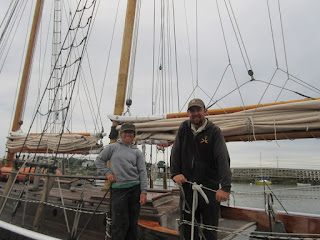 Our cruise pilot, Perry Davis and his mate Erin.  I think they were glad to put into port and get out of the rain too by this time. 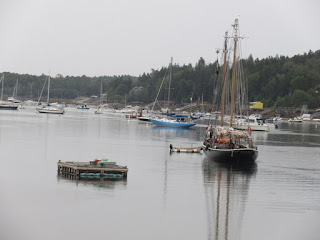 This windjammer cruise could have had better weather but even so, it was worth the cost to us.
And the partial bottle of Allen's coffee liquor Capt. Davis snagged floating in the water along the way(must have fallen overboard from a lobsterman's boat as Maine fishermen are crazy about Allen's!lol)was a bonus.  ;-)

Sluggy
Posted by slugmama at 12:11 PM