If It's Thursday It Must Be Hershey-Part 1

So Thursday I had my semi-annual appointment with my dermatologist at the HS clinic at Hershey Medical.  My knee was acting up so I took my cane in with me and it's a good thing I did.  I usually go into entrance #3 as it's closest to their office but there was a whole slew of handicapped placarded parking right by that entrance(which is always filled when we go)where we parked so I should have known something was up.
Since my appointment was on June 4th I had called the office the week before to make sure they were going to be open and honoring appointments before driving 2 hours down there so I knew they were open.  The only protocol(which I asked about)was everyone coming in had to wear a mask.  Up here in"Pennsyltucky" we have a governor we now call "Commie Tommie" due to his heavy handed tactics during this pandemic.  He has all counties color coded on his daily charts(yes, he is still holding daily video briefings)and we were traveling from one county through others to the doc in Hershey so wanted to make sure there would be no issues getting down there.  Luckily neither of us had to go to the bathroom en route. lolz
But Gov. Wolf still keeps changing official rules and what can open when, even going against his colored charts, for what seems like depending on his mood when he wakes up each day.  So frustrating.

So anyway....we park, Hubs notices a sign on Entrance #3 and walks over to read it before I try to go in.  Evidently they have closed all but Entrance #2 and #4 so they can monitor better who is coming and going.  So I drag the cane out of the backseat, and try to get into the building at entrance #2(which is slightly closer to where we parked but still a hike).  We figured they wouldn't want non-patients coming in to wait inside so Hubs stayed in the car and I said I'd let him know if he could come in.

I get inside the entrance and there is a table with two nurses to screen everyone who is coming into the facility.
Fair enough.  I get a temp check and they ask me a dozen questions about being sick, about being around anyone who is symptomatic, if I've traveled overseas within the last 6 months.....that sort of thing.  I get the green light to enter(and a lovely green wrist band as a parting gift!)and I start down the long hallway to the dermo wing.

Before walking away I noticed an older couple has come in and approached the nurses table and one of the nurses asked if they both had an appointment and the man says just his wife and they started telling him he couldn't come in unless he had an appointment.  As I turned to walk away the guy was giving them attitude but I didn't hang around to see how that came out.  I stopped to the side in the empty hallway to text Hubs to stay in the car.

I social distance in line waiting to check-in at the office, then find a chair in the almost chair-free waiting room before being called back.
The nurse and nurse practitioner both said this was their first week being fully open though they had a few patients the previous week.  And that the masks were driving them all nuts, having to wear them all the freaking time at work.  Just wearing mine when I go into a store annoys me until I can remove it in my car....I can't imagine having to wear one for hours on end!
The appointment went well and we talked out-patient laser surgery for one area that the heavy duty meds aren't working on.  The thought of surgery made me all giddy and shout, "Oh goody!".
Not really.  I just shouted that sarcastically in my head. 8-)

I also have to have a yearly TB test on the Humira so I get a slip and start the long march back down the hallway, past the entrance and down another hallway to the Lab to have blood drawn.
And that's when we had an issue and encountered the "Foil Hat Lady". 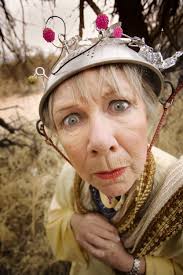 This photo sort of resembles her, sans kitchen colander hat with foil and wires.

As I approached the table at the entrance there were two folks being checked in-a young woman with a baby strapped to her chest in a carrier and a "woman of a certain age"(a bit older than I, I am guessing)with her mask down under her nose but over her mouth.  The "woman of a certain age" was being asked the questions and the nurse was trying to put the lovely green paper bracelet on her and I was waiting patiently while another woman pushing a young child in a stroller came up from behind me at a rapid clip and was trying to get past this area as well.  But her child was not masked and she was right on my heels with that stroller.  Eventually she realized I wasn't moving so she backed off and then her, her kid, both nurses and I all got to hear "Foil Hat Lady" launch into a tirade at this poor nurse.  Let's see.....she covered lots of ground......about our Governor, Trump, politics and politicians in general, Communism, "there is no pandemic", and on and on.  Obviously this was not the time nor person to spew your paranoid rant at.

I knew I could "take her" if I had to(having a cane and a few pounds on her-she looked frail)and for a moment considered saying something to her.  But since we here in a medical facility and I didn't want Hubs to have to bail me out of jail I just shut my big mouth and waited for her to get the freak outta the way and move on!  She passed me and led her Freak Parade down the hallway I had just come from.  I let the lady with the stroller go through before me and I stopped to talk to the poor nurse at the table before heading down the other hallway.  I said, "I guess you get all kinds coming through here and I hope you don't let it get to you when someone like that takes her issues out on you.  You are doing a much needed job and some of us appreciate y'all."  I think it helped her feel better but at least I felt better attempting to neutralize the bad mojo "FHLady" was spewing.
For godsakes, don't take your issues with government/politics out on a healthcare worker!

So I get to the Lab, hand in my blood work slip, get checked in and go to find a seat in the very small narrow waiting area.  They have every other chair roped off with tape and written on the tape is "don't touch this tape". lolz  There are also signs not to put your things on the roped off chairs.  I am sitting there trying to keep my legs out of the narrow walkway between the two chair lined walls and balance a cane and my purse on my person.
Luckily I didn't have to stay in this position for long before being called back for the blood draw and I was free to leave.

As I approached the Nurse's table of the now infamous Foil Hat Lady confrontation, a man was coming into the entrance with a mask under his chin, a phone in his hand and he attempted to just proceed down the hallway ignoring the whole set up there.  Let me also mention here, that the sliding doors of this entrance had all kinds of signs up on it on the exterior of it about wearing a mask(properly)to enter, Covid-19 warnings, checking-in when you got inside the doorway, etc.  All in big red letters most of it.....so hard to miss.

The nurse yelled to him, first to put his mask on properly.  He fixed it and then tried to leave down the hallway again.  She yelled at him that he had to come back and check-in with them, to which he said, "ok".  The nurse put the thermometer thingy to his forehead and started asking her list of questions to which he said, "No  English."  Then she had to try to get him to understand he had to go back out and come in at Entrance #4(I suppose because they had a nurse down there who spoke Spanish he could communicate fully with).  Just listening to her getting him to understand he couldn't just go down the corridor to Entrance #4 and had to go outside to come in there was exhausting me as I tried to squeeze by and get the hell outta there!  Maybe a paper she could let him read(or read off of it to him- I don't know how many Spanish speakers they get in this area)that conveyed this message might have helped but it wasn't my business or my place to say anything so I got out of there and took the long march back to the car where Hubs was waiting.

I am sorry I took no photos.  I was a bit preoccupied with "medical stuff" and it wasn't appropriate to snap photos(at least I couldn't be surreptitious about it). ;-)

Email ThisBlogThis!Share to TwitterShare to FacebookShare to Pinterest
Labels: crazy people, Hershey medical, seeing a doctor during a pandemic

The June Giveaway is now CLOSED.