I am getting where I get anxious when I have to deal with the public.  As I get older I just want to stay home and not interact with people I don't know.  This was my frame of mind going into this adventure.

I advertised the stockpile sale on craigslist(which also automatically put it on the yard sale app)and I posted on 3 local FB sales sites on Friday.
The dingbat comments started shortly after. lolz

Then the ones who wanted to show up on Friday because blah, blah, blah.
Read the ad.....it's Saturday for this hour until that hour.

Then the ones who wanted prices and a list of EVERY SINGLE ITEM I WAS SELLING!
Nope.
You have to show up on Saturday.....my event my rules.

I opened the garage promptly at 8 am.

Except for the first guy and his wife everyone was lovely who showed up.
The first guy was such a jackass that the other folks who were there while he was were rolling their eyes and making comments to me.
sigh.

After he left there were no problems and no stress.
Things were steady, busy for the first two hours.  Then a few stragglers the next one and 3/4 hours and I started breaking things down about 45 minutes early due to nobody showing up and closed the garage door 15 minutes before I posted I'd end it.

If you happened to be here at quarter of ten you would have seen the "show".....me fall straight back out of my chair, flat on my back on the ground.  It was a silly little chair that folded up when I bent over to grab a bag for a customer to put stuff in and when I went to sit back up I just kept going back onto the ground. lolz
Fun times.
Sore as hell and bruised still from that but no damage was done. 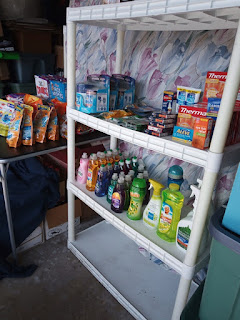 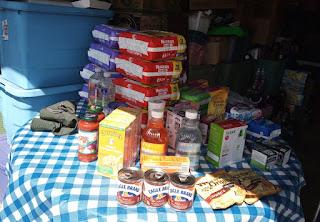 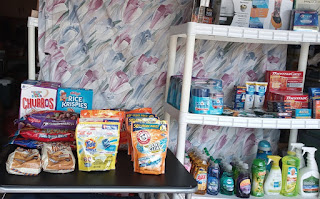 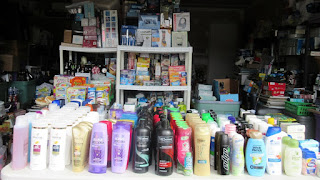 I still have TONS of shampoo.  The low end stuff($1 a bottle)didn't sell. It was mostly the $2 and $2.50 bottle stuff that went but not enough of it sold.

I'll take some 'poo down to my brother/sister in-law, to son and GF and to Kim and her Sissie next month when I see all of them.  I am in the process of giving away things to people I know around here who can use them.  Another load of shampoos will go to the Food Bank not to mention into the Giveaway boxes.

I made a wad of cash, more than I thought I'd make which was nice!
But I am not telling y'all how much I made yet.

You'll have to wait until I post the September Giveaway tomorrow and you'll see why then.  ;-)

I started with 7 Rubbermaid tubs of stuff to sell and now have 3+ left.
All this is in excess of what I kept for family use.  Since I had to move the toiletries tubs out of  Hubs' man cave room I now only have space for 2 Rubbermaid tubs plus 2 unused bedroom dressers I have filled with toiletries.

Had I done another flea market with this stuff it would have meant more work(and compressed into a short window of time),traveling and hassle which I wanted to avoid. 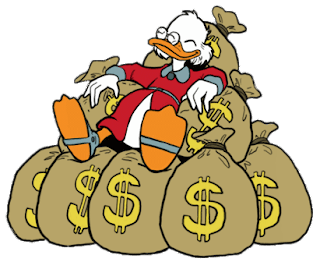 Overall, the sale was a success--it lightened the amount of toiletries sitting around here AND gave me a little "fun" money. ;-)
And it was beautiful weather to sit in the garage and have people give me money for stuff they wanted and I got for free or almost free.  8-)))