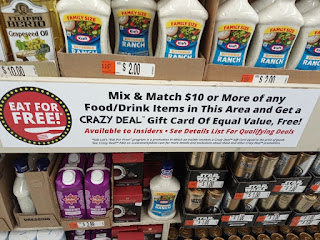 I may have to go back for some of that grapeseed oil, salt and energy drinks for Ex-College Boy. 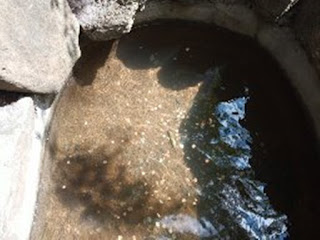 I did NOT dip into this pond with lots of coins in it at the amusement park we took eldest and GF to last month.
Ok, so Hubs threatened me if I DARED to even think of reaching into that pond. lolz


*  This house down the street was sold and the folks who bought it totally reconfigured it, tripled the size of the garage and then re-sided it. 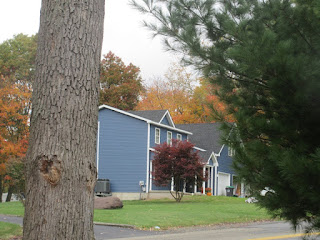 It went from a washed out Ivory to this Blue.  I think Urspo would call this Prussian Blue?


*  I've been getting some interesting spam comments lately.  If they don't leave website links I have put a few through just for the amusement level.
Here are some I didn't put through because they go on the advertise a website, but some of this is comic gold I tell ya! lololz

"The author is known by common history of Patsy but large number of misspell the following.  Montana is her birth point.  Dispatching is just how I support my in addiction to it's something I really like.  Her husband doesn't like it the way she does but what she really likes doing is ballet and these days she has time in order to on issues......"

"Greetings. The authors name is Santiago Vos but he doesn't like people today use his full logo.   Colorado is her birth place but she can have to move one day or just one more.  He is really fond of body building and now he has time to battle new facts.  Meter reading is my employment now but soon I am on mine...."

"I want to have to introduce myself to you, I am Kristy Magdaleno.  To climb is the things I do obtain.  Indiana is where he as well as the wife live and his family loves it.  In her professional life is actually an interviewer......"

"Hello dear visitor.  I'm Valentin.  My wife. i choose to exist in New York and I've everything when I need at this juncture.  Auditing has been his employment for your time.  Acting is the hobby she is never going to stop doing..."

"Nice fulfill you, my name is Jaime and my wife doesn't take pleasure in at.  Montana is her birth place but could have to hold one day or another......" 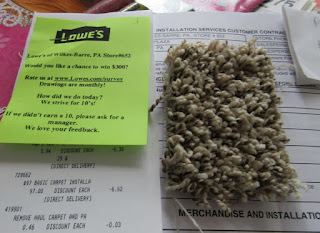 Hubs finally got his room emptied enough that he could go order carpet for that room.  I told him to get something in stock so we weren't waiting a month+ for the rug to come in before we could get this scheduled to be installed.
Here's what he got...a nondescript brown/tan thing... and it's getting installed on Friday.
Now he is under a deadline to get the room painted and of course it's going to be the worst temps of the Summer here the next 4 days.  I hope he doesn't ask me to help him paint since he refuses to put an a/c in his room.  That will show him......lolz 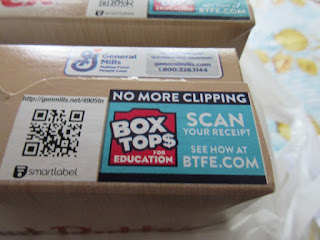 Box Tops for Education have gone bye bye!  Or rather, they have gone digital/electronic.
No more clipping box tops.  Now you scan the thing and you have an smartphone app account.
Bad news for those of us who clipped BTFE and sold them on eBay.  *sad face* 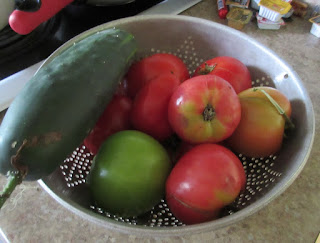 While the cauliflower is done and the broccoli is almost finished, the tomatoes are ramping up.
No yellow squash this year(the one squash that formed withered on the vine)and only a few cukes.
This colander weighed in at 61.8 ounces of yummy veggies.  A green tomato because a storm this week knocked it off the vine.

Maybe I'll hit the farm later this week(after the heat breaks)and get a load of tomatoes to can if the prices are reasonable.  I've got to dig out my quart canning jars to see how much I can put up without having to buy jars.


*  The morning glory vines have taken over the deck railing and the back garden.......... 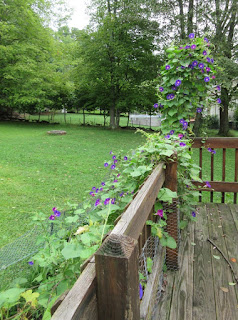 And the shot of the other end of the deck. 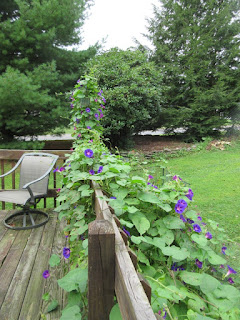 *  I finally had my appointment at the HS Clinic down at Hershey Medical.  It went well.  They classified me at Stage II right now(of course I stopped flaring the week before the appointment....isn't that how it always goes?  Your symptoms get better right before you see a doctor. lol

Anyway, I don't qualify for a clinical trial they have going now since I'm not Stage III(sigh)but the doc did put me on Humira.  Boy was THAT an ordeal getting my insurance to pay for it!  Much too long of a story but the Cliff notes are I was on the phone with insurance, prescription plan and their specialty pharmacy for TWO FREAKING HOURS, each one telling me to call the other to get answers.
I got approval and with the Humira card as well my $50 co-pay went down to $5 per month so that was a big win.  Once I am on Medicare at age 65 costs will be much higher, if I am still on this drug.  At present, depending on which Part D Rx plan you opt into(and pay for)Humira could run me $700 a month but that's a can better kicked down the road 4.5 years and we'll deal with it at that point in time. 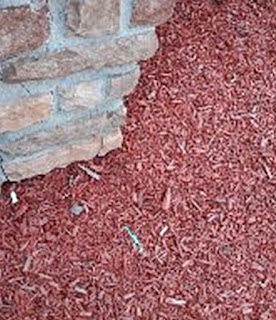 One of those nasty used dental picks in the flower bed(it's the green blurb in the photo).  Honestly, I see these things everywhere!!  At the nasty dirty Weis(PMITA)Markets parking lot at the store West of here, in the handicapped parking spot at my Rite-Aid.....just about every place I go.  Come on!, have a little class people!  If you insist on flossing in public at least throw your nasty ass pick in a garbage can. 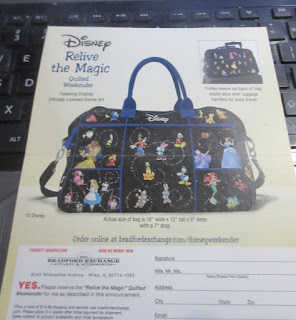 A Disney themed duffle bag.  18"x12"x9" with officially licensed Disney art for the extra low price of $129.95 + sales tax adn $14.99 shipping.
I am no fan of Disney to begin with but you could just speed down the interstate and throw fist fulls of dollar bills out your car's window instead of paying that sort of money for that sort of item. 8-) 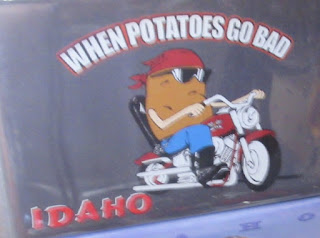 Good Gawd I just realized I am TWO years behind since I haven't posted about the trip out West two Summers ago.....Geez!

*  And to close here is a meme I got a chuckle out of and posted on Facebook last week.  I am an equal opportunity hater when it comes to politicians and their parties so don't go getting all pissy at me if you are Clinton lover.  . ;-) 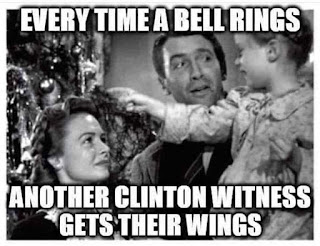 And that's a wrap for Sunday.  I am off to organize my pantry/stockpile.
What are you up to today?