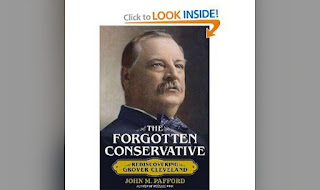 "Grover Cleveland-The Forgotten Conservative" by John Pafford.
The one review on Amazon dumps on the book and it's author.....I agree that the book is way short but to rag on the author because he's obviously politically conservative?  Um, who else would write a book on a conservative POTUS?....certainly not someone with extremely liberal views! lolz
Short but very informative.  Grover Cleveland is truly one of the "forgotten" presidents even with him serving 2 terms.  Forgotten nowadays because of his unwavering conservative principless in office and that US modern society thinks "conservative" anything is a dirty word.
One of the few late 19th century and 20th century POTUS who did NOT usurp the Constitution and use his office to garner power to upset the balance of justice over the other 2 branches of government.
A man of his convictions and a lot of common sense....not something you see much in politicians nowadays.

A short read but worth taking a look at to get a sense of the man. 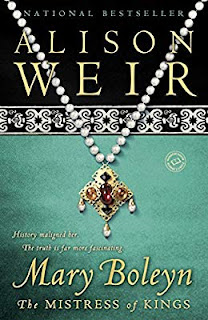 "Mary Boleyn-The Mistress of Kings" by Alison Weir
I thought going in that this book would be a fictionalized novel drawn from the little we know of the historical person of Mary Boleyn, the sister of Henry VIII's second wife, Anne Boleyn.
But no, I was pleasantly surprised that the book, written by a well known historian and author,
deal with the facts that are known of Mary's life and then posited possible rational suppositions from there.
No great surprising outcomes/facts were reached.  The reader is given the facts and suggestions of possibilities and left to draw their own conclusions.  It was thought provoking and would make a good Book Club selection...but of course I am biased here, because Mary is my 3rd cousin through marriage.  ;-) 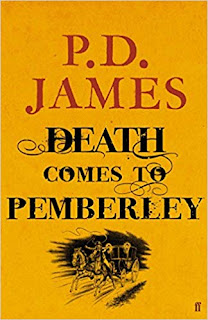 Not being a big Jane Austen fan I wasn't greatly invested in this read but it was enjoyable.  James is a well-known crime/mystery writer in the UK and abroad.  She used Jane Austen's "Pride and Prejudice" as the jumping off point for this book.  It will help your enjoyment of this novel if you have read/are familiar with the P&P world/characters and the Jane Austen style.
I think P.D. James nailed the Austenesque style but with staying true to her own voice.
This book was made into a PBS show a couple of years back too.


*  Make Xmas Card List  DONE but a little FAIL too
I made my list but realized after mailing out my Xmas cards that I neglected to include a few folks.   Sorry about that! eek  I will be writing letters to them in January instead.

*  Write and Mail Xmas Cards  DONE but a little FAIL too
Ditto what I said above.

*  Get Out Xmas Dishes  DONE
Got them out, washed them up and used them for a few meals at Christmas.

*  Put up Xmas Tree  DONE
Got it up but the decorating took waaaaay too long since the kids didn't help. grrrr

*  Decorate other than Tree  DONE
I ran out of energy on this and we only also got the banister garland-ed(not a word), 3 of my Santas put out, the Xmas runner and the Crystal reindeer and sleigh put on the buffet and my Bavarian Whirligig set up. 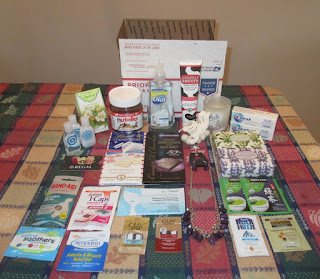 The winner received it in a timely manner even though it went out right before Christmas. ;-)

I actually got an unfinished sewing project completed in 2018!!!  I know it's shocking. lolz
I put myself under a deadline for it so it got done....otherwise it would probably still be sitting up on my machine table.
I had these jams for my brother to finish.  I told him about them, took them to VA in October so he could try them on and I could mark them to hem and put the elastic in the waist and gave myself a Xmas deadline so he could unwrap them for the Holidays. 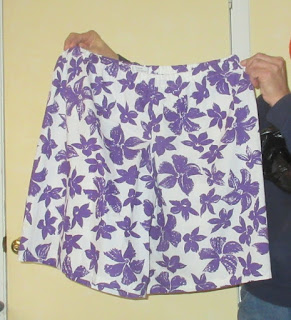 Hubs is holding them up for the photo. 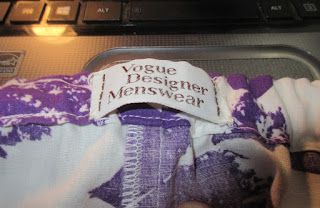 I even put this Vogue Menswear tag in them....I got those years ago when I bought a Vogue Menswear pattern or two.  After my brother opened them he was confused because he didn't remember trying them on in October when we were down in VA and he thought I had "bought" them for him since it has a Vogue label in them.  Hehehe  Maybe my sewing skills are so good the jams appeared to be factory sweatshop produced? lolz

*  Clean the House for Company  FAIL  Well a little cleaning got done(bathrooms mostly and some dusting)but I hurt my leg right before Xmas and Hubs made me try to stay off it and nobody else here did much of any cleaning in my absence.  sigh  The house was clean enough I suppose.

*  Purge Inserts  DONE  Got the old inserts purged and purged my clipped coupons out of my coupon case(aka pencil case).  Only about 6 inserts left in the stack.

*  Go Through Xmas Gift Box  DONE  Got if gone through and all the gifts in there wrapped or put into the stockings.

*  Finish Shopping  DONE  I really didn't have much to buy coming into December(I'm a shop ahead person for the Holidays.)  There was no pressure to hit the stores for another.  Hubs always waits until the last possible minute to give me his list and then it's scramble time to get something he wants...drives me crazy.  I usually do that shopping online so I don't have to face the crowds in the stores.  Hubs and I did shop a little store browsing/shopping at our leisure.  No pressure, just the way I like it.

*  Wrap Presents  DONE  Everything got wrapped/bagged.

*  Mail a few Xmas Gifts  DONE  Only had a few items to mail out and I got them all out in the post in time to be received before Xmas.

*  Plan Winter Holiday  PARTIALLY DONE  Well I did some thinking and planning on this but Hubs has been dragging his feet with imput or ideas.  Nothing is booked yet so still up in the air.
Sonya is not ready for a visit yet so the SW is out so we have less ambitious ideas for where to go/what to do.  I really do want to go somewhere out of the snowbelt in February so I'll continue to work on this in January.


So that's it for what got done in December.  Nothing very ambitious and mostly having to do with Christmas time.

I hope y'all got everything you needed to do done last month!
I'll be back in the coming days with my Yearly 2018 Goals and how all that turned out too.

Sluggy
Posted by slugmama at 11:02 AM

Email ThisBlogThis!Share to TwitterShare to FacebookShare to Pinterest
Labels: bills paid, books read, December To-Do List, preparing for the Holidays, recap your monthly goals, what got done in December