So I was surprised on Friday night by Kim and her Sissie coming to PA for my Birthday Dinner.

So bright and early on Saturday morning I gave Kim a call.  The forecast was looking bad so she said to come down to Wilkes-Barre to meet them for breakfast at the Perkins.

By the time I got there Kim had obviously had a Diet Coke otherwise there would have been blood on the sand.
They had been waiting 40 minutes for a table at Perkins.  Only 2 waitresses had shown up for the morning shift that day and no hostess so Sissie had given their name to one of the waitresses but evidently it was the wrong waitress because the other waitress was "running the show" and the waitress they gave their name to never told the other waitress.....meaning while I was there for another 20 minutes waiting everybody supposedly behind us in line got seated and we still were waiting.   Kim grabbed a job application sitting out by the register and started filing it in.

On the question about have you ever been convicted of a crime, she put, "No.......but I am about to commit murder if we don't get the next table.".
Her other answers where just as wacky...... 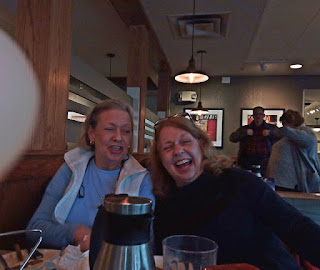 Here we are after getting waited on, a beverage of choice and a tummy full of pancakes. 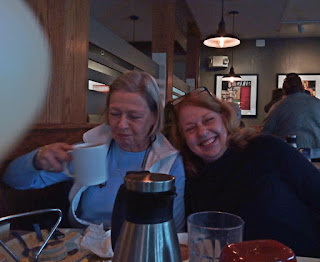 It was about check-out time when we finished eating.  The forecast had changed a bit so they had to decide whether to stay another night and leave early Sunday or try to out run the storm Saturday.
The snow wasn't suppose to start until 2pm so I said they should check-out and stay at our house so we could have a pajama party that night and then they could leave on Sunday.

After a brief consultation they agreed so I drove up to the motel and waited on them to check out and load their car.
I then scooped them up into the purple Sonic and we took off to go do some girl-time shopping.

But not just any shopping.  Sissie had never been to Ollie's(Good Stuff Cheap!)and Kim was ready to go back after I took her there in October.

So Ollie's it was.  Better still I had a 15% off Coupon for Ollie's that they had mailed to me so we filled up two carts of goodies, used the coupon and my c/c and divvied up who owed what later that night.

Then I took them to see something I had wanted to take Kim to the last time she was here.  Better still Sissie was a professional/opera singer in her youth so the excursion seemed even more apropos now.

Don't let it ever be said that Sluggy doesn't know how to treat company.
No sirree! 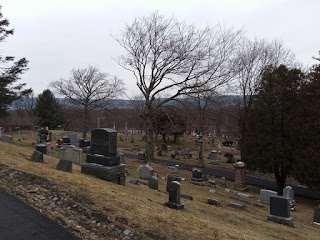 But not just any cemetery!
Sluggy knows all the happening places. lolz

The Hollenback Cemetery in Wilkes-Barre PA. 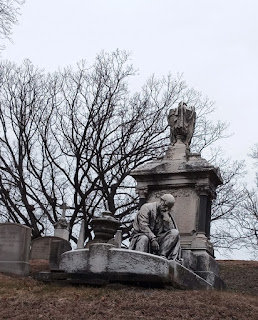 An interesting memorial to Dr. John T. Doyle and both his wives.

The front gates were locked however, but as we drove by Sissie spied a driveway in on the side so I turned around and we went in that way.

This entrance was to a different section or as Sissie said, "It might be unhallowed ground."  There was an old iron barred fence separating the two graveyards and the roads in this one were barely deer paths and the old dead weeds were overgrown and tall, like this section wasn't kept up.  We saw that one section of the iron fence had been torn open so we parked the car right there and walked into the nicely kept up graveyard with asphalted roads. 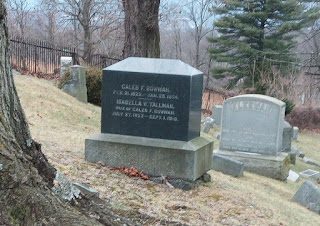 And just whom did we climb through gopher holes and climb up the face of a cliff to see?
This lady.......... 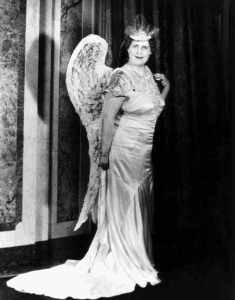 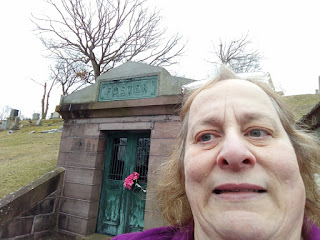 Florence Foster Jenkins was born and raised and then buried in Wilkes-Barre, PA.

Her life is the tragic tale of a musical child prodigy(Florence was a pianist who performed at the White House for Rutherford B. Hayes),from a prominent Wilkes-Barre family, who's father forbade her from becoming a performer, so she ran away at age 17, married a "doctor" in Philadelphia who gave her syphilis on her wedding night.  She supported herself by giving piano lessons until her father died in 1909. 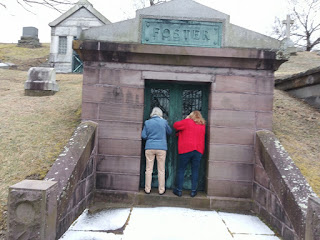 Florence and her mother, coming into a lot of money at Charles Dorrance Foster's death moved together to Manhattan to live the life of wealthy socialites and pursue her dream of a career in music. 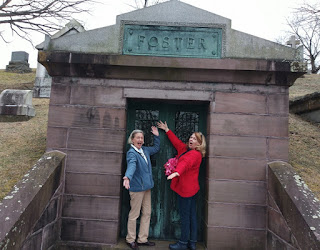 Florence founded a society music lovers club, The Verdi Club, which gave recitals and performances, of which Florence would often cast herself in the primary role.

She met and fell in love with St. Clair Bayfield, an Englishman who fancied himself a high brow actor, and he managed her performances and financial affairs.
Florence died in 1944 within a month of a benefit performance at Carnegie Hall for US servicemen. 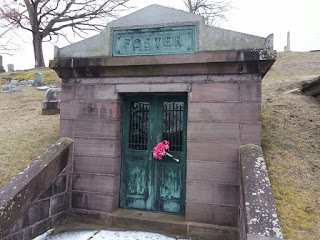 It is debated whether Florence had no musical ability or if the syphilis and the treatment for it(mercury and arsenic)led to physical problems so she couldn't hear how badly she was off-pitch, etc. 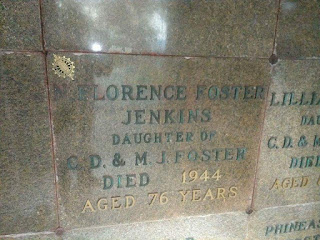 I stole this shot off of F.A.G. since the mausoleum was locked and I couldn't get a clear shot at the marble marker.
I left 3 stones on the pillar next to the mausoleum to let Florence know we had been there. 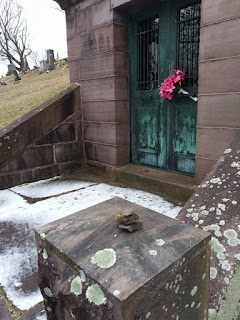 I need to do a little more research but I am pretty sure the Florence's mother, Mary Jane Hoagland Foster might be related to Kim's Hubbie!! lolz  Maybe Joe's bum ear is hereditary Kim...... ;-)

After that since nothing was happening with the weather the girls wanted to hit up the Salvation Army store for some silver to use at the reception for Kim's daughter's wedding this Summer.  No luck there but Sissie and I found a couple of things.  ;-)

Still nothing on the weather front so I took them across the road to Gabe's which isn't quite an Ollie's but a store in that ilk.  They were game so we wandered around that store for awhile and everybody found a couple of treasures. 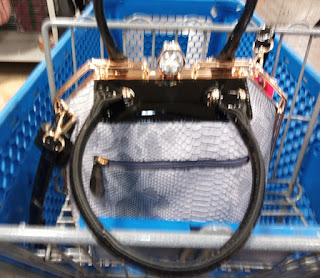 I did leave this lovely faux lavender alligator purse at the store though........ 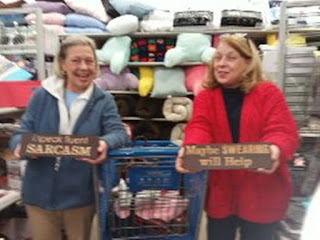 I found these signs that really were appropriate to the person holding them.....*snort*


As we headed out of Gabe's the snow had just started falling so we headed up the mountain to home.
A quick stop for gas(and Kim's Diet Coke for later),and once in my tiny town another stop at Curry Donuts(where Kim found some change while she distracted me and Sissie!)and yet another stop at Mickey D's(for 'fresh' Diet Coke), then a brain fart when I tried to get home via a closed bridge road LOL and we finally got to the house.

After gorging on donuts and dinner(well, some of us had dinner!)everyone snuggled up in the den to watch a little tv.
The local PBS station shows Lawrence Welk at 7 pm and then a show called "The Pennsylvania Polka"at 8.  That show is basically a bunch of old people at the PBS studio at the local casino polka-ing to a live polka band.  A solid hour of watching senior citizens try to polka. 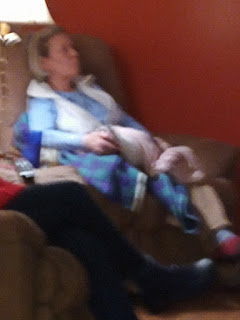 Chester made himself at home in Sissie's lap....well, she was in his chair after all. lolz

Last time here, Kim was mesmerized by that show and she drew her Sissie into it's evil web too on Saturday.  I told her had it not been snowing and treacherous outside I could have driven them up to the casino to be on the show themselves. lolz

Sissie got the bed pallets sorted out in the living room and turned in early.  Kim and I talked a little then she hit the hay as well.

Before I knew it Kim was popping her head into the bedroom to wake me up the next morning.  They wanted to get an early start before the rain turned into something worse.  I was hoping we'd all be snowed in for another day as I so much fun with those two! *sad face*

Hugs goodbye and they were off like the wind and I worried until I got the text that they got in aok to Sissie's house.

What an unexpected surprise for my birthday.....so fun!!!
Thanks ladies!


Sluggy
Posted by slugmama at 5:47 PM

Email ThisBlogThis!Share to TwitterShare to FacebookShare to Pinterest
Labels: having lots of fun, my birthday surprise, shopping with the girls, surprise visitors for my birthday