Lots of stuff to talk about but mostly no common thread and nothing worth an entire post so let's get crackin' with it! ;-)

*   First off an unexpected package arrived last week.  It was from one of the folks I sent a Xmas card to in Anne's card swap, "Treaders" who blogs at Random Thoughts. 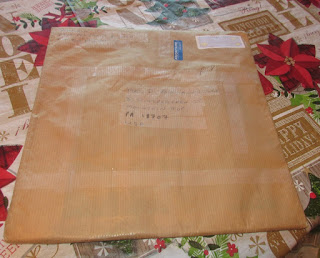 Anyway the package was addressed to me but the back said it was for Hubs.
I had mentioned in my card to "Treaders" that Hubs' father's family was from Sicily and we hoped to travel there during out retirement. 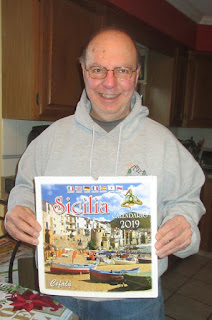 Imagine the surprise when Hubs unwrapped a 2019 calendar from Sicily!  I think it made his holiday........  8-)))
Hubs is a big one for calendars. So thank you "Treaders" for your kind gift.  It is now hanging in a place of honor in the kitchen and Hubs has transferred all his important dates onto it.

*  Here is all the WAM(aka Walking Around Money)I ended the year with..... 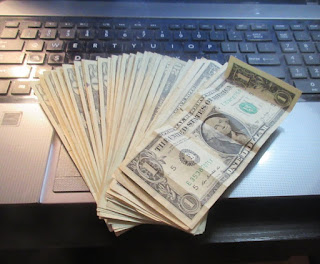 *  And speaking of spending money(or not), I did buy myself a couple of things during the after Xmas sales......... 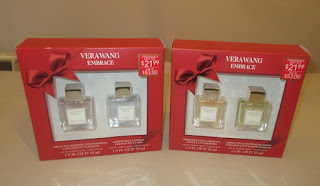 Rite-Aid had these two different Vera Wang fragrance sets.  I got a couple for real cheap during the Black Friday sale.  I figured I'd have one to give if I needed a last mintue "Oh crap! Someone's coming over and I didn't buy them anything gift".  I opened the other one and man, do I LOVE these scents!
So I decided to keep both for myself since they were practically free after sale/rebate/BC.
My R-A had 2 more left when they went to 75% off so I scooped those up too at $5.49 each.  There's where $11 of my leftover WAM went before 2018 ended.

*  Hubs and I have been taking advantage of no snow so far in January and just going out to stores to walk around and poke around in the clearance stuff.
Walmart was a boon for fun crap to check out........... 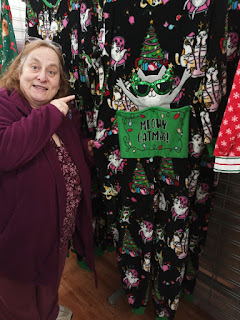 I have threatened all my family/friends on Facebook with these fuzzy/long john pajamas.  They are tacky cats and Xmas themed pjs.  That green panel is the back flap so you can do your bathroom business w/out disrobing.
Hy-sterical! Got that one because I couldn't find the one with the unicorn vomiting glitter.......... 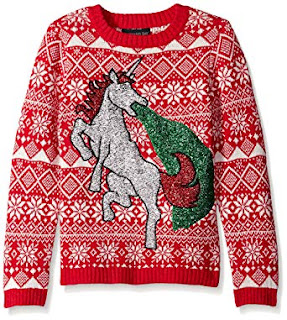 Anyway, Walmart has been a treasure trove of ugly Xmas sweaters this month....... 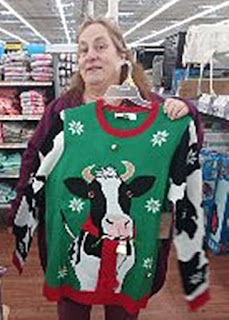 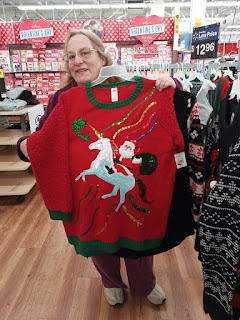 And who wouldn't want a Santa riding a Unicorn, ALL DONE IN SEQUINS!lolz 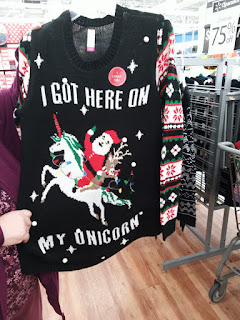 Or this one that lights up in case you get lost in a snowstorm....... 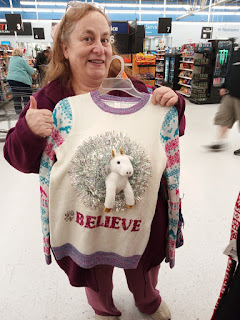 Or this one with tinsel and half a stuffed unicorn sewn onto the front.
Yes, I believe, I believe this sweater is butt ugly!!!

Hey, I even found a matching fuzzy hat for this sweater.... 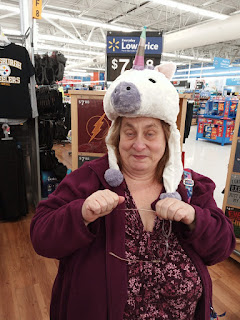 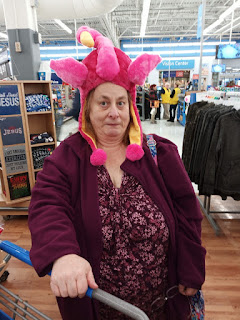 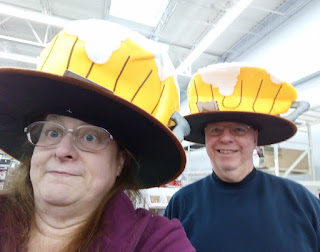 And this one where I looked like a demented Christmastime Mad Hatter......... 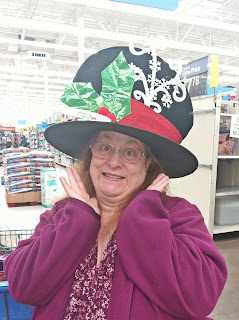 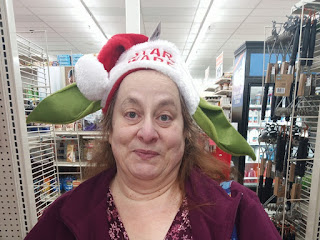 Why do I always screw my face up like that for photos??

*  I had some salad bits and pieces to use up, some almost expired grilled chicken strips and frozen cranberries to get out of the freezer so I tried my hand at making the Bob Evans Cranberry Pecan Salad.  Except I didn't use pecans and we had feta not blue cheese.
I found a copycat Colonial Dressing recipe(though they LIED obviously because it called for ACV and not white vinegar and celery seeds instead of poppy seeds)and made a batch. 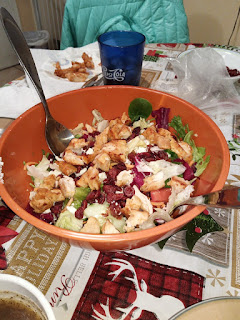 Though not quite on point it was tasty and used up some stuff lying around the fridge/freezer.

*   I saw this unusual word on FB and am embracing the concept. 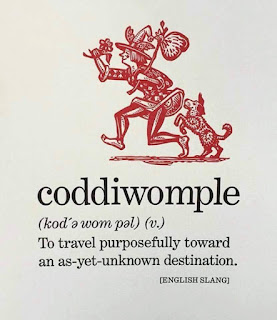 My whole life seems to be a coddiwomple.

*  Speaking of traveling I went to the Weis(PMITA)Markets in the town West of here.  They are a much larger store than mine and sometimes they have better meat sticker deals.
As I got back in the car I noticed all the trash lying around my car in the parking lot.  Usually at this time of year there is a permanent layer of snow covering the ground so it doesn't look at run down and nasty as the parking lot looked that day. 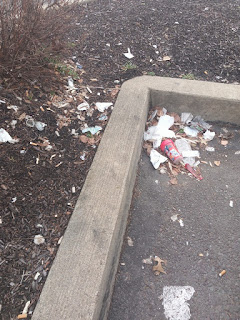 Lots of the usual sort of litter......cigarette butts, food wrappers, bits of plastic.... 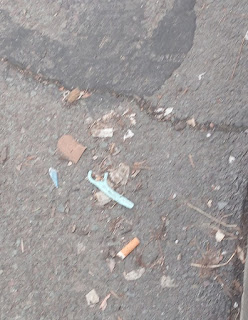 Is it me does anyone else see dental floss picks all over the place!?!  Everywhere I go I spy them on the ground...bleck! 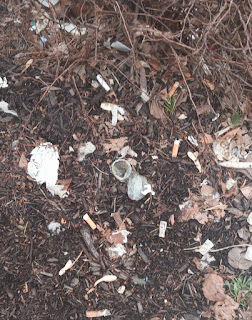 Do you see what's in the center of this photo???
A condom.
A "used" condom.
I guess I should be happy someone is practicing safe sex but really?  Who has sex in a grocery store parking lot???  Such a romantic place to park and do the nasty with your honey, yes?

*  They are predicting we are going to get hit with two snowstorms this weekend.  Oh goody.  I can't wait! hahaha
At least it shouldn't be anywhere near like this one from the '90s.... 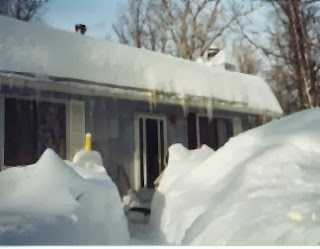 What's everyone else up to lately?


Sluggy
Posted by slugmama at 4:23 PM