One of My Scottish Ancestors in America

Speaking in general terms, when referring to the three first major English colonies in America, the ones in Massachusetts and Pennsylvania were primarily founded for and by religious dissidents, the Puritans in MA and Quakers in PA,  but the one in Virginia was founded for and by Englishmen who wanted economic wealth and opportunity.  The Virginia colony founders were a mix of well off entrepreneur types, non-firstborn sons of wealthy families(family wealth all went to the first born son ie-primogeniture), tradesmen and a few servants.  Throw in a few adventurers into that mix as well.
Religious dissenters would also make up the population of the Virginia Colony arriving around 1700 and beyond(Huguenots fleeing Catholic France or other countries which they took refuge in after fleeing persecution in France).

Being as 95% or so of my direct maternal ancestors arrived in America before 1710 and to Virginia I find it interesting when I find one who came to the New World via another route(colony).  And I find it even more interesting when one came here for religious reasons.  And if you are a follower of American Presbyterianism then he is quite important to you as well.

One such ancestor of mine is John Thomson, my 7th Great Grandfather.

John Thomson was born in Northern Ireland about 1690.  He was of the Ulster-Scots, usually know in America as the Scots-Irish.  Ulster-Scots meant that his forebearers had come to Ireland from the Lowland areas of Scotland after English King James I sanctioned a plan to confiscate lands in Ulster County Ireland from Gaelic nobility and have those lands settled by Protestant English in a planned colonization of Ireland called "The Plantation of Ulster".

John Thomson was sent to study at the University of Glasgow in 1706.  He was licensed as a minister by the Presbytery of Armagh(Ireland)in 1713 at about the age of 23.  In 1715 he, his wife, Margaret Osbourne Thomson, and their two children set sail for the port of New York.  By 1717 he was ordained by the Presbytery of Philadelphia and he was the minister of the Presbyterian congregation in Lewes, Delaware.  This was the second oldest Presbyterian congregation in the state of Delaware.

This is how that church looks today...... 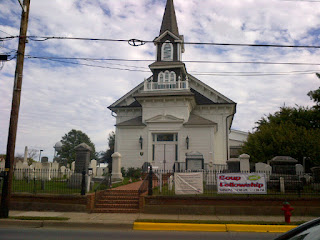 I believe the church he helped build was two buildings before this one and was brick but it's long gone.

After leaving Lewes in 1729 he headed a congregation in Middle Octarara(Southeast of present day Lancaster PA)from 1730 to 1733.  He left because they had trouble coming up with the funds to pay him and at this time the Thomson family numbered 14(John, his wife and 12 children but some say there were more than a dozen children)so going without payment wasn't acceptable.

Rev. John received a call to Chestnut Level(17 miles further West from Middle Octarara in Drumore Township PA)where he continued his preaching from 1733 to 1744.  Around this time was what is called "The Great Awakening" was happening in religion in the American colonies.  In the Presbyterian sect there was a taking up of sides, either "Old Side" or "New Side" and Rev. Thomson was an Old Side believer.  He wrote many papers against the New Side and due to his being outspoken and "adequately endowed with Scottish sagacity" many of his congregation were at odds with him as well and they did not renew his contract in Chestnut Level.

Religious papers and books written by Rev. Thomson include.......

The Poor Orphan's book as well as one of the religious tracts was printed by his friend, Benjamin Franklin.

The most influential paper he was the primary author of was "The Adopting Act of 1729" for the Synod of Philadelphia.  This act shaped the early Presbyterian religion in Colonial America.

After the death of his wife Margaret in 1735, John Thomson remarried to Mary McKean, the widow of Thomas Reid, a member of his Middle Octarara PA congregation.  They had one child, Hannah Thomson, together.

By 1744 he left his congregation in Chestnut Level and removed to what was then the "back country" of the Virginia Colony which was South Central VA.  Today his homestead in Virginia on the Buffalo Creek is in Prince Edward County(near Farmville VA).  He became a missionary in the frontier of the Virginia Colony.

When Rev. Thomson removed to Prince Edward County, Virginia most of his mostly now grown children went with him.  Three of his daughters, Mary, Jane and Elizabeth and their spouses also moved to Virginia near their father.  These three daughters all married brothers; Robert, Douglas and Samuel Baker.(Brother Caleb Baker also went to VA but didn't marry of Thomson girl.)
This Baker family was descended from a Baker from Massachusetts who resettled outside of Philadelphia and married a descendant of Phillip Packer, Jr.(the son of Phillip Packer of England and Sarah Isgar his mistress and later his second wife-Story HERE), Susannah Packer.
More on these Baker brothers at another time.

While in Virginia Rev.Thomson was very busy.  Congregations were small and far apart and without full time preachers in backwoods Virginia at this time.  He is known to have been an itinerant traveling preacher from 1744-1750 and attended to congregations in Winchester, Staunton, Rockfish Gap(Nelson Co.), Cub Creek(Charlotte Co.), Buffalo and Walkers(Amelia Co., now Prince Edward Co.), Hat Creek and Concord(in what would become Campbell Co.).
Once he started his missionary work he no longer participated fully in the Synod of Philadelphias doings though he would continue to write.

In 1743 the Synod of Philly finally got a school organized under the leadership of Rev. Francis Allison. As Rev. Thomson had pushed for a school for young men he was put on the original board of trustees. New Jersey gave this school a charter in 1769 as the Newark Academy.  Newark Academy continued on and eventually became the University of Delaware.

Though it's not proved, he may have helped found Hampden-Sydney College outside of Farmville, VA.  It is presently one of only three still all-male institutions of higher learning in America.
While residing and preaching in this area of Virginia Rev. Thomson began a school for young men.  This school is thought by some to be where the idea for Hampden-Sydney sprang.  John Thomson's son in-law, minister Richard Sankey(who married his daughter Sarah Thomson)was a trustee of H-S on it's original board and was closely associated with John Thomson  This suggests that Rev. Thomson was involved in some way in that school's beginnings.

While serving the back country of Virginia as a traveling preacher Rev. Thomson received a call to minister to flocks in central North Carolina.  This inland area of NC was settled by fugitives from the Virginia Colony, as well as Ulster-Scots, Germans and other non-Anglicans.  The settlers of this area of the Colony were generally poor hard-scramble farmers working on mountainous and poor soils.  Settlers here were few and far between.  Rev. Thomson left Virginia to go to North Carolina and minister to these flocks around 1751.  He built a cabin adjacent to his son in-law's property near Mount Mourne, NC, where he and his wife, Mary and their child, Hannah, lived.  This son in-law was Samuel Baker who had married John Thomson's daughter, Elizabeth.  Samuel and Elizabeth are my 7th Great Uncle and Aunt.

Rev. John Thomson ministered to many congregations in what is present day Iredell County NC.  It is said he established a number of preaching stations; under a poplar tree near where Davidson College now stands, another near Fourth Creek became the the site of the First Presbyterian Church in Statesville NC, another station became Third Creek Prsbyterian Church and the town of Concord NC grew up around another site.  He also visited/preached to flocks in settlements in which Centre(later Mooresville, Iredell Co.), Hopewell(later in Huntersville, Mecklenburg Co.), Sugaw Creek(later in Charlotte Co.), Poplar Tent(later in Concord, Cabarrus Co.)and at Cathey's Meeting House(later Thyatira in Salisbury, Rowan Co.)churches were established.
He was a busy guy. ;-)

At his death in 1753 he was buried under his cabin home.  This was the eve of the French and Indian War and Indian raids were commonplace on frontier settlements in NC   This explains why he was buried beneath the floor of his cabin to prevent looting.  Samuel Baker, Thomson's son in-law, died in 1757 and was also buried under the cabin.  This site eventually became known as Baker's Grave Yard and saw more Baker/Thomson family members enterred there.  Eventually the cabin was destroyed and the grave yard was surrounded by a rough rock wall.
In 1963 the site disappeared under the waters of Lake Norman, after the construction of Cowan's Ford Dam on the Catawba River.  The graves and stone markers where removed to the old Centre Presbyterian Church cemetery in Mooresvillee North Carolina in 1961. 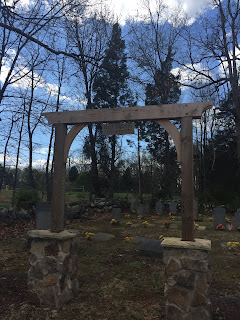 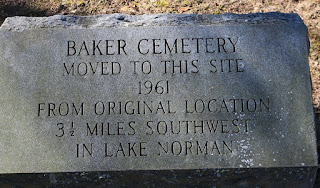 There is also a commemorative stone there as well. 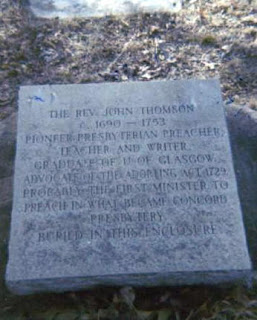 This grave marker was added later to the removed remains of Rev. John Thomson in the Centre Church Cemetery Baker enclosure.

Rest in Peace my 7x GGrand.


More on these interesting lines of family ancestors later......