I have pared down my monthly To-Do Lists.  Between being ill for 2 months this Winter and not feeling much energy to "do" I felt it was better to have a smaller list and actually feel like I was accomplishing something rather than facing a long list of items I didn't get to when the month was over.

*  Pay Bills  DONE  If nothing else gets done, this does.  I paid two irregular bills early/for the year and earned a small discount off the price of each bill.  Every little bit helps, right? 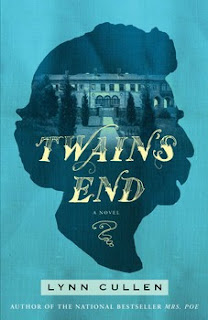 This author is making a career of writing historical novels(taking famous folks and writing about their lives in a part historical/part fictional way).

Cullen is a very astute writer and this tome was interesting and enjoyable and dare I say-a page turner.  Having studied Samuel Clemens life a bit myself it follows pretty closely to whom he actually was.....an insecure, narcissist borderline megalomaniac in his later life  as reported from first hand accounts of the people who knew and/or loved him.
This tale is told from the perspective of his personal secretary(Isabel van Kleek)and her relationship with Mark Twain.  It's apparent after reading this book that one of the most beloved popular American authors of the 19th century was a personally tortured man who made those around him miserable.
I recommend this book.

I wanted to read two books and had the time to but after I got started on the second book in March I lost interest in that one temporarily and picked up a third book to read.  Then this month I took a different book to see our eldest son so now have three books started but not finished yet for April. lol
I forsee lots of reading this month.  ;-) 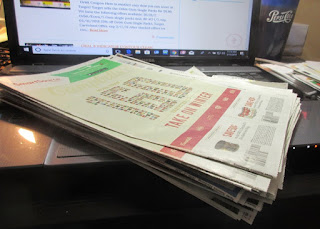 I went through my inserts and pulled ones that were 1 to 4 months old and had mostly expired Qs in them. 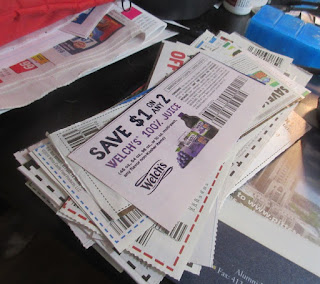 I clipped any non-expired Qs but only if they were for items I might use before their time was up. 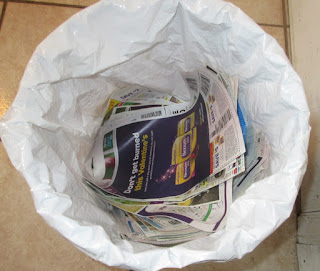 And I tossed what was left.

On the last day of the month I also make a habit of purging the coupon envelope that I take to the stores when I go grocery shopping so that got gone through on the 31st.

I try to purge the inserts every third month or the things just pile up badly.
It's a good habit to get into, to purge the old paper on a regular basis.

*  Sell Stuff  DONE  I sold 2 items on eBay in March....it wasn't much, but I'll take it!  I need to get things going on the local F/B sale site now that the weather is better.  I have shampoo and diapers to get sold. 8-)

*  Relist House in LA  DONE  The house went back on the market in early March.

*  Sell House in LA  IN PROGRESS  If everything goes as it should we will no longer own this house before April is done. 8-))))) 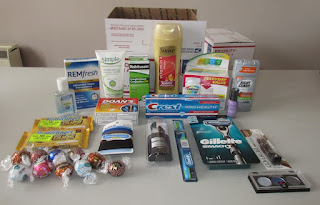 *  Mail Giveaway  DONE  Marie won the box and I am sure the chocolate is all gone by now. lolz

*  Redo Passwords Book  IN PROGRESS  I did start on this but didn't get too far into the process.  It's just a tedious chore but long overdue.  Cross my fingers I get it completed in April!

*  Do Taxes  DONE  Actually Hubs did most of this.  He's taken over this chore since he's retired now.  He insists that we file electronically as he thinks that filing a paper return now sends up a red flag(as most people file electronically nowadays).  Not that we have anything to fear from an audit but you don't want to stick out like a sore thumb and get smacked with one if you can help it. lolz
Anyway, the taxes are done, filed and we've received a refund from the Feds.  Had to pay local taxes and state taxes in PA AND LA plus the cost of the software and filing fees(UGH)but even after these costs we came out ahead for 2017 $5K and change.  I was shocked it was so much but I'll take it. lolz

*  Plan possible 2018 Travel  IN PROGRESS  Well we went into 2018 wanting to do a couple of trips(big ones)but they involved other people's plans/lives and things haven't worked out to allow us all to travel/see each other at this point.  So we are making alternative plans.  I have been in a funk this Winter and not much wanting to go anywhere far away.  We are working on a trip to the Canadian Maritimes(already been to New Brunswick)but I am still not "feeling it" as they say.  We'll see what we figure out.......

*  Work on 2018 Goals  IN PROGRESS  You would think that by now(a quarter of the way through 2018)we'd have our goals set for the year.
Ummm, no. ;-)
It's still a work in progress.  We've got lots of balls in the air around here.  Selling that LA house, College Boy graduating next month and what is plans are, Daughter still here for another year, where to live in retirement, etc.  We are still at a crossroads of sorts and still figuring stuff out.  Maybe I'll sit down with Hubs this week and narrow down some "life stuff" so I can make some plans or nix other plans.

That's about it for March so let's put that month in the books and forge ahead into April and all the possibilities in store.

What things did you get to in March that were on your To-Do List?