Helping Your Kid Get a Handle on Money

I guess I've done a pretty good job of teaching my kids about how to handle their finances well.

Eldest son is almost 26(next month)and self-sufficient and on his own as far as money goes and has been since graduating college.

Daughter use to be self-sufficient and on her own but does live here now. But we don't pay for her car and insurance, her college costs, her dog or her "fun" so she is on her way to being self-sufficient once again once she earns her degree.

College Boy is a whole other story however. ;-)

Last year I sat him down and had a money talk with him, just the latest of many I have had over the years with this boy.

He needed to work his Summer job and save his money for college that Fall.  Well even though he made Thousands that Summer he carried something like $400 back to school with him. 8-(
Not wanting to strong arm him or nag him I took a hands off approach after we had our little sit-down.
Things obviously didn't work out well.
The main reason is this.........

College Boy has a checking account with a debit card.
Like most millennials he doesn't know the PAIN of spending "real" Money.
Nor does he write checks, withdraw cash(usually) or keep a register and know exactly how much and when he is spending his money.

When he went away to school the only bank/credit union available to him was this one.  Our local banks/CUs weren't in that town so I couldn't be on his account and access it to check up on his money habits once he wasn't living here fulltime.

Taking out a piece of plastic and swiping it just isn't the same as having to wrench cold hard cash out of your hand to pay for something.
Add in that he doesn't even keep a running tab on his balance of what he spent and as a result money just poured through his fingers like water.

So I started telling him back in March on his Spring Break, while we were in the car together for 2+ hours with no distractions that this Summer was going to be different because I was going to MAKE him save his money!

I sat him down a few weeks ago, after I got home from Virginia, and I told him how this was going to work--

He was to come up with a budget to include the amounts he required to pay for his "needs".
Needs vs. Wants discussion ensued.

He needs gas money weekly to get to job and to see friends.
He needs vape juice money every third week.
He needs haircut money before returning to school.
Basically that covers his needs.

Then there are the Wants.
He wants to buy food, drinks whenever he is out.
He wants to go to the movies/bar/restaurant with his friends.
He "wants" to the point of spending every penny. sigh.

So we roughed out a budget finally that included all his need money and some WAM(walking around money)or Blow money for his wants.
This budget cuts down substantially on what he gets to "blow" every week.

Figuring out his take home pay per week and then deducting his expense budget he also came up with a target to save this Summer of $2,100.
This savings amount will be divvied up thus--
He needs a new computer(specialized for his music recording)which will cost about $600 and he wants $1500 to take back to school in the Fall for incidentals.

So I took away his debit card(ouch!)and the plan was for him to withdraw all his pay each week, give me all that cash which I place in a bank's safe deposit box.
I give him back his expense $ for the week and tuck away everything else to save it and he can't get to it to spend.

Except where he works won't let you direct deposit your paycheck into your account until 30 days after you begin working there.
They load a debit card with your pay, so he's having to go to an ATM and withdraw from this loaded debit card to give me his cash.  We leave his expense money on that special debit card for him to use each week.
Once he's been there 30 days he can get direct deposit and we'll go fully cash for expenses.

We are three weeks in and it's going well.  We have two weeks of pay tucked away.... 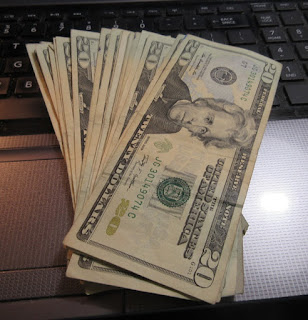 And next pay deposit he'll have enough to buy the components to build that computer plus some.

He's not spending every penny like previous Summers and we've had some talks about handling finances too in the last few weeks and he's expressed his thanks at learning these lessons.
He's paying closer attention to what and how he is spending now too and he's making better choices(though forced to at this point lolz).
Once he gets the direct deposit he'll get his weekly money in cash and we'll see how that goes.

I hope this Summer is long enough to get him out of his bad money habits and help him develop better ones before he is fully on his own.

Sluggy
Posted by slugmama at 6:05 AM