I don't remember what we did on Monday, May 16th, on our last full day in Louisiana.  Probably a trip to the insurance agent to cut a check for house insurance, hanging out in the motel pool and a little shopping.
Speaking of shopping, the Daughter and I hit the Hancock Fabrics near her house.  Last Spring/Summer Hancock stores were having going out of business sales. 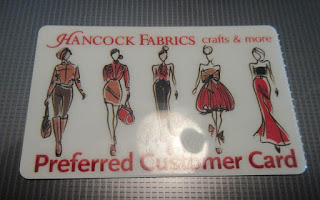 The trip to the Hancock Fabrics near her/own house turns out was the last time I spent money at that chain.  This loyalty card got pitched when I got home to PA. sigh.

Here are a few goodies I picked up there because at 50% off or more, what fabric-aholic could resist?!? 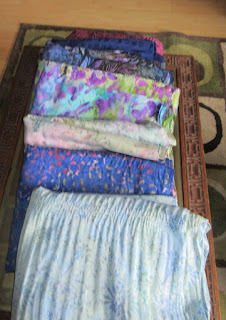 A bunch of rayon prints, my favs. 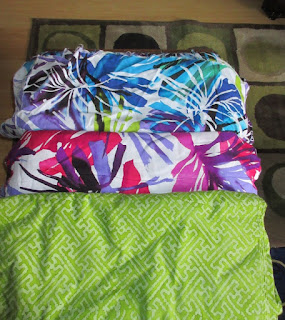 More rayon and the green one is a cotton print. 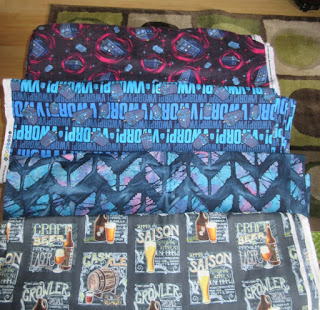 Some novelty prints, Dr. Who in cotton and flannel and a craft beer print. 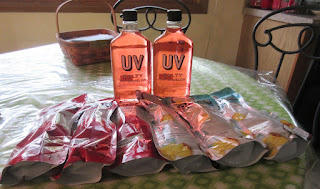 We also hit the liquor store.  I got some cheap watermelon vodka and more of my frozen paper umbrella drink  packets.

I also spied a nice sale on Laphroaig 18 year Scotch for Hubs.  At the price it was at, I should have had Hubs buy a case of it! 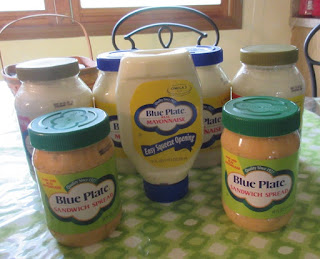 I also hit Walmart and loaded up on Blue Plate mayo and sandwich spread.  This lot didn't last very long.......

On the morning we left Shreveport, we stopped in at Daughter's work as we headed out of town for home. 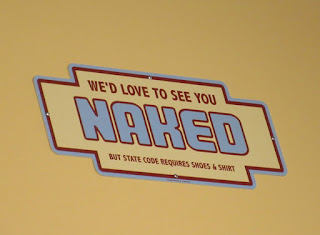 Daughter was a manager at a Jimmy John's sub shop in Bossier City.
She wasn't there when we arrived because she had to run to Sam's Club to pick up some supplies that they were out of........ 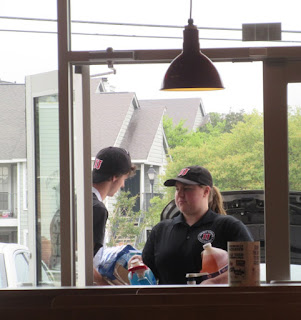 After she and one of her workers got everything in the building they set to work getting ready for the lunch crowd........ 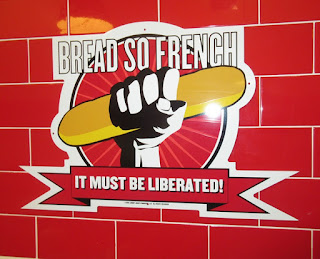 Even with us there, Daughter is all business when she is working and we had to visit while she barked out orders and prepped for the lunch rush(even though it was barely 10 am). 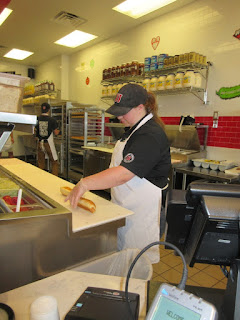 I liked these signs they had in the eating areas. 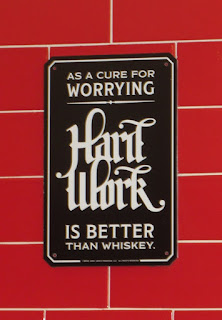 We said our goodbyes and headed out East on I-20.

We made a pit stop(for both the car and us)before we crossed over into Mississippi at a truck stop in Tallulah LA.
While waiting for Hubs to finish in the men's room I wandered around the convenience store and found some Southern eats......

As the sign says, "Hot Boiled Peanuts", regular or spicy..... 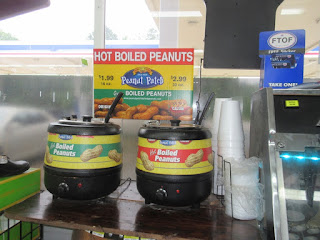 And jackpot! a jar of pickled eggs too. lol 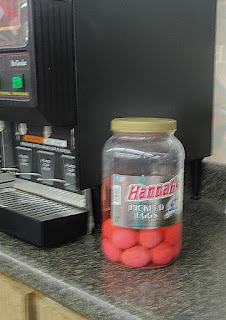 The guy working the register saw my flash go off and when I wandered up to the front he started asking me, in very obviously stilted English, a bunch of questions about what I was doing.  Could be that he thought I was a health inspector or INS spy or something.  Who knows?
He looked a bit calmer when he understood that I was a blogger and just take photos of interesting things for my blog and nobody from the state was going to shut his store down or cart him off for deportation.
Geez!

We rode straight through MS and next stopped in Tuscaloosa Alabama to gas up and then stretch our legs at a store.
No we didn't go into this store........ 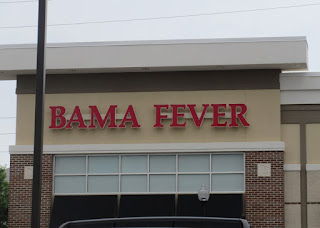 We headed to World Market in that same shopping center.

Ok, here is a great mosaic table on clearance this WM had on their front sidewalk....get it now because it's "The LAST ONE!". 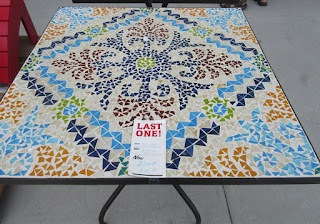 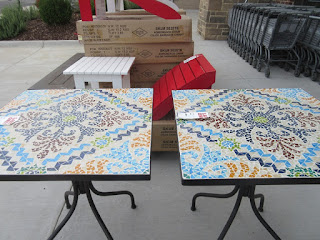 This shopping center also had a fancy Burger/Craft Beer joint.......
Lots of fancyfied stores in Tuscaloosa. 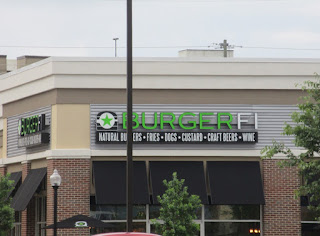 Between our trip to WM in Shreveport and this Tuscaloosa stop we picked up some necessities at a good price.  Those bags of coffee were awesome buys on clearance(not ground so they kept fresh longer)and I LOVE that hibiscus syrup added to my iced tea in the Summer as it's so refreshing. 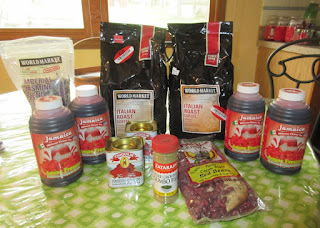 Another hour+ back on the road and we made it to Birmingham and our hotel at the start of rush hour.
The Quality Inn we stayed at was not bad pricewise(considering it was in B'ham)plus they had a small pool and a nice breakfast spread. 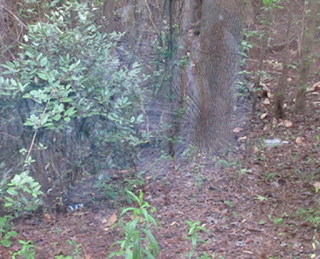 The only not so great thing was that our room and window was on the back of the building and appeared as if the woods by our room was used as a hang-out drinking spot.  If you can't see it there are beer cans and glass liquor bottles in this photo I took.  I guess the motel management wanted us to feel at home.  *snort*

After settling in and taking a quick swim I called a fellow blogger who lives in the area to see if she was free to meet up and maybe have a little dinner with us.

About half an hour later up drives Anne in the Kitchen of New Happenings At The Table Blog in her van.
Quick hugs and hellos happened and I think I said something ever-so witty like, "Anne! You're not in the Kitchen!". lolz
After she finished rolling her eyes at me(and thinking but not saying, "Bless her heart", at me)Anne whisked us off to this place............ 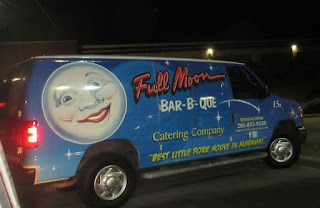 Well not their catering truck(which I took a photo of as we were leaving) but the Full Moon Bar-B-Que restaurant. It's a local chain that does BBQ and other southern specialties.
Their motto is "Best Little Pork House in Alabama".  Now how could you NOT like a place like that? hehehe 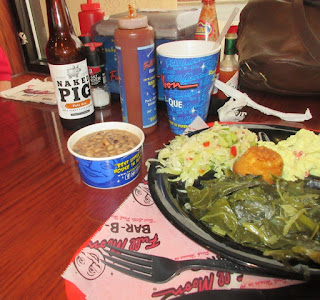 I got a plate with 'Cue, Collards and Fried Green Tomatoes(of course).
While still in line ordering I saw they had grilled pimento cheese sandwiches on the menu, after I had already ordered a plate of 'cue.  Without a second thought I also ordered a sammich! lolz
Hey, we didn't have lunch that day so I didn't feel like a big ol' greedy slug, but maybe I should have. '-) 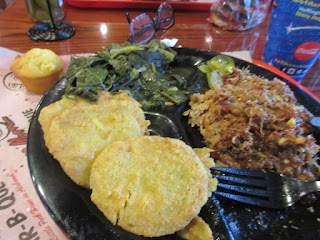 After a couple of hours of getting to know one another and chowing down, Anne had to take us back to the motel.
I had Hubs snap a few photos of us together for the proof that we really did meet Anne and this was the best of them where one or the other of us wasn't closing our eyes or had a big goofy look on their face(you decide who did which)......... 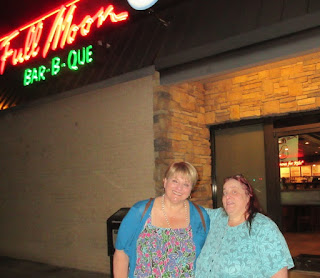 It was so nice to finally meet Anne and she is such a sweetheart and full of that good ol' Southern hospitality and charm. 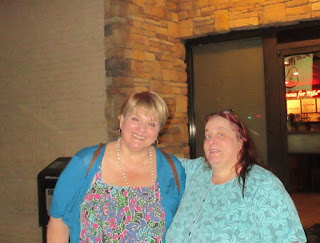 And I found out that she has VA ancestors too so once I actually do the work we may also be related. lolz


I would heartily recommend if you are ever in Birmingham to try out Full Moon Bar-B-Que.  Not only was the food good but even though it was well after the dinner rush the staff was mighty friendly. 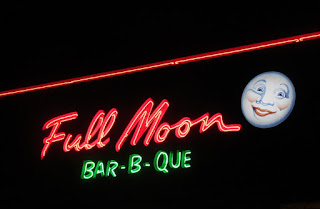 It was back to the motel and we waved as Anne drove toward home.  We went to bed that night with 'cue in our bellies and the satisfaction of having met another online friend.