So we left Natchitoches Louisiana and headed Northwest toward Texas, driving down back roads. 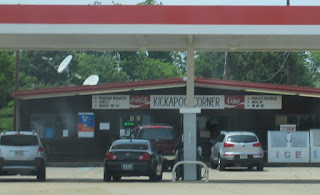 We came to a crossroads called "Kickapoo Corner".  I don't know if this area is called that or it's just the name of the gas/convenience store someone put up here. lol
We also saw advertisement for the Champions of God Cowboy Church too.  Cowboy Churches are not something I am familiar with back in PA.

Driving west we came to Keatchie LA and this historical marker............ 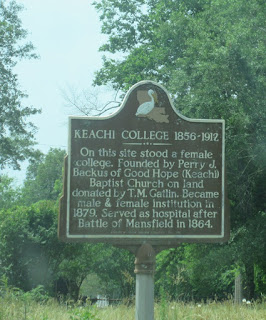 and pulled over by some abandoned buildings where Keachi College use to stand. 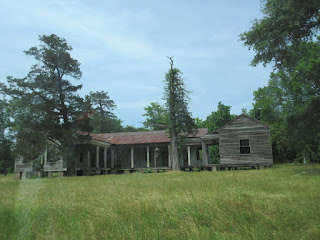 These buildings aren't ruins of the College but a farm.  There are ruins of an abandoned high school behind the tree line too on this property.

Keachi College, a women's college, was used as a field hospital after the Battle of Mansfield, LA on 8 April 1864.
The Red River Campaign of the Union involved Gen. Banks attempting to invade Confederate Texas traveling inland from the Red River on back roads below Shreveport, LA.
Banks didn't count on Gen. Taylor, CSA, and his troops challenging Banks' advance.  The battle lasted two days and was a Confederate victory, although short lived obviously.

The wounded and dying from the battle were transported to Keachi College to be patched up or prepared for burial.
The dead were interned across the road in a makeshift graveyard for the Confederate troops, as the climate here in April made it impossible to "preserve" and transport the dead home to their families to bury them. 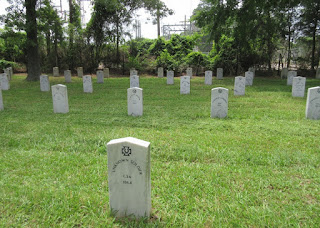 It is said that many were buried in communal graves too as they were dying in quick succession. Local slaves were tasked with digging trenches into which the dead were placed.   The dead number over 100 both in marked and unmarked graves. 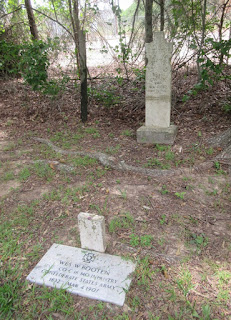 While we were there, we saw two men doing maintenance on the grounds(mowing and burning brush).  The one stopped to talk to my Daughter and I briefly(sorry that I didn't get his name).  The local Sons of Confederate Veterans and Daughters of the Confederacy Chapters have taken over maintaining this graveyard. 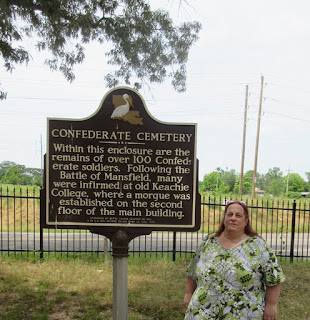 Me at the Keatchie Confederate Cemetery.

After that stop, we headed on west into Texas.....

We drove into the little East Texas town of  Carthage, TX.
We stopped in at the local H-E-B grocery store.....I had never been in one of these before. 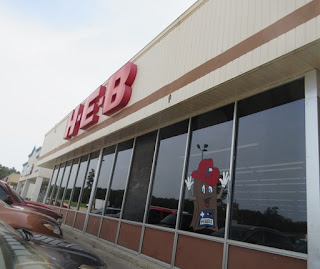 Since it's Texas they carried liquor in the grocery store and they were well stocked with the "high end" stuff cousin Sonya Ann likes....*snort* 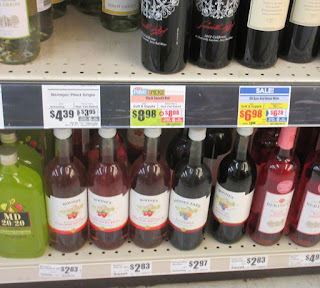 Hubs found some local brews too, Karbach Brewing out of Houston.  Hubs bought this Hopadillo IPA. 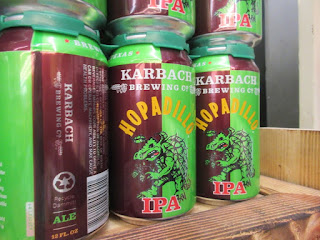 I always like to look around in grocery stores when I travel and see if there are items for sale I can't get at home, and the H-E-B did not disappoint!

You probably can't read this label but it's Beef Tongue....fresh tongue, not frozen.  Not sure if this was a good buy or not at $5.36 lb.
I didn't buy it as transporting it home would have been problematic(as would figuring out how to cook it). lolz
Oh darn. 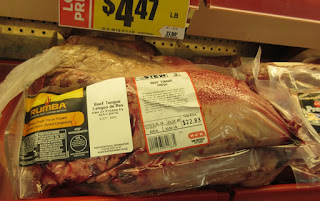 I left the tongue at the H-E-B but did buy a few drinks.

We finally settled on the Longhorn Grill.
Not Longhorn the chain but this one....... 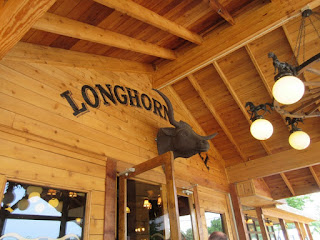 We got there as they breaking down their Sunday Buffet so we ordered off the menu. 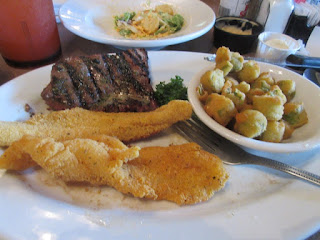 I got a Surf N' Turf plate(steak and catfish)with salad, fried okra and broccoli. 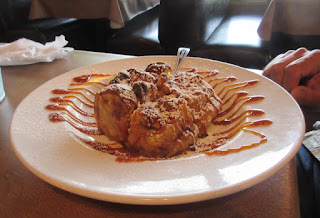 Hubs got this Bread Pudding dessert to top off his meal.  I took one bite but that was all I could fit in my already full stomach. Eck.

We headed back to LA after that, dropped Daughter off at her house and went back to our motel room for the evening.