After a leisurely breakfast we packed the car up and hit the road East out of Alabama........ 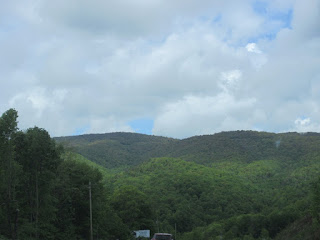 We got a little east of Oxford Alabama and saw a homemade billboard from the interstate for what looked to be an interesting place.  We weren't in a rush that day so we said, "What the heck!" and took a little detour......... 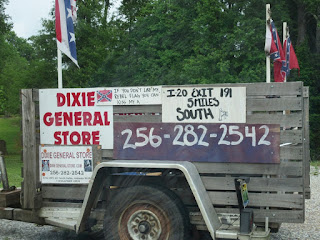 To the Dixie General Store. 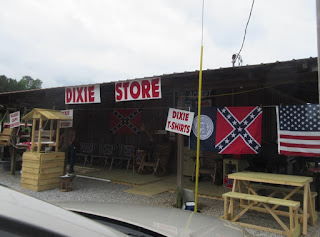 This is an interesting little shop full of all things Dixie and Southern related--t-shirts, flags, hats, belt buckles, blankets, etc.

Bob, the gentleman who runs this operation knows his American history and we had a nice long chat with a fellow Southerner who loves his piece of our country.
Be sure and take the time to stop in if you are passing through this part of Alabama and check out his wares.  Bob is super nice and personable.  Tell me I sent ya! ;-) 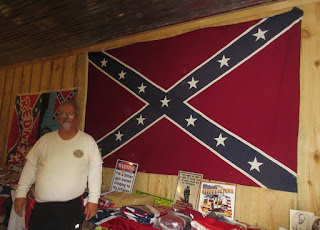 Fairly soon after getting back on the interstate we were crossing over into Georgia. 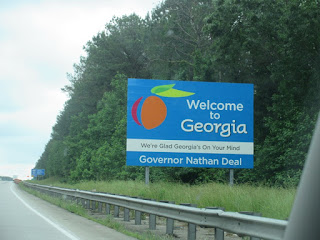 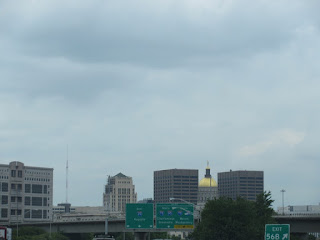 Luckily we got through there before rush hour hit. 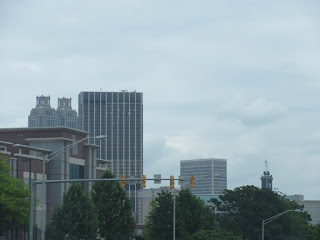 We did see the torch/flame where Olympic Park is(and where the 1996 Summer Olympics were held)from the highway as we passed by..... 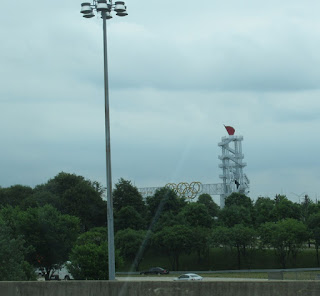 We made a quick stop off the interstate in Conyers, Georgia to stretch our legs when Hubs saw a billboard advertising a liquor store. lolz
I went in but left to sit in the car as I had no shopping to do here(really? how much liquor can one person buy?!? lolz).
Next door was this food place with Louisiana cuisine.....in metro Georgia. 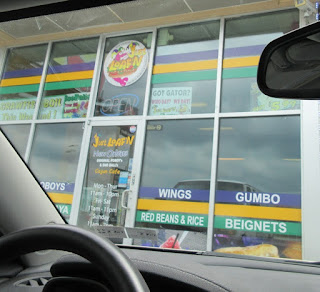 I went in but they were out of what I was going to buy so I got Hubs some Bread Pudding with a Whiskey Sauce to eat later that evening back at our next motel.

We stopped in Augusta for the night at a Comfort Suites.
After Hubs checked in he came out to the car for me and the luggage and hands me some tokens.
Evidently this particular motel has a manager's reception between 5-8pm on Tuesdays and Wednesdays were they give you two free alcoholic drinks each.
And lucky for us, it was a Wednesday!

Not only drinks but they give you dinner too!  I sure wish I had known that before we checked in because we had already made arrangements to meet some online friends for dinner near their home.
Darn it!  Hubs was about near tears that he had to miss a lasagna dinner........

So we hit the road across the border into South Carolina down windy back roads.
Oh look!  A turkey vulture.  Was this an omen? 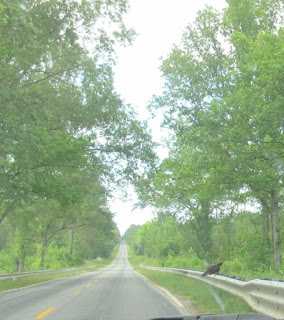 We finally arrived in the little out of the way town that blogger Java Jones and her husband Superman live in.
We met at a local to them brew pub called "The Mill House Pizza". 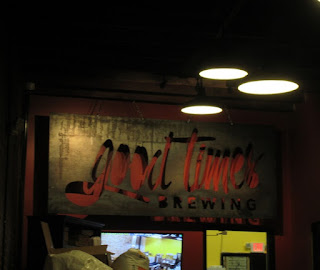 Good Times Brewing happens here and we partook of a few different beers.
I hadn't seen Java in person since the 2nd Bloggerpalooza back in March 2014 and I had never met her DH since he didn't attend that Blggerpalooza. 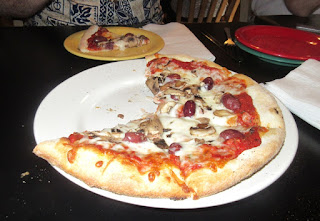 We didn't realize it was really really small or we would have each ordered one for ourselves. lolz

The hours just flew by as we caught up on each others' lives and bonded.  Before I knew it, it was after 9 pm and we had to hit the road back to the hotel. 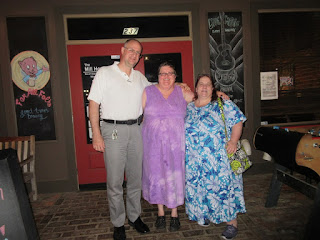 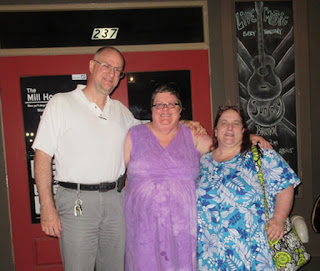 Across the street in the parking lot I saw two Giraffe statues.  Too bad it was so dark and the shot didn't come out very well..... 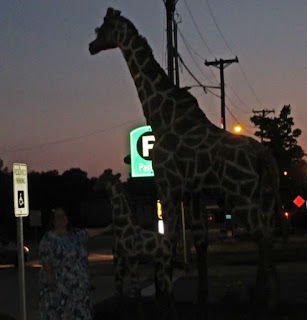 We stopped before leaving the town for gas and I was STARVING!  I grabbed a pre-made sandwich at the gas station convenience store to eat on the ride back to Augusta, GA.
The ride home was a bit spooky on those back roads, this time in the dark, but we finally made it back to the hotel, sleepy and tired.

After the free breakfast on Thursday morning we hit the road for our next stop.
Across the Savannah River on a gray and gloomy day........ 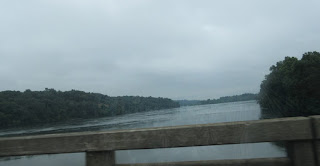 And we were back in South Carolina, again! 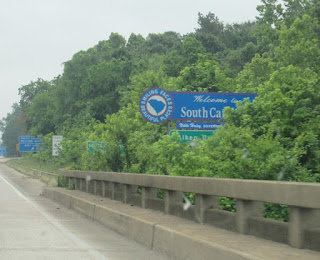 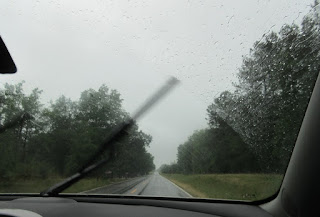 A big flag at the Camping World store outside of Spartanburg, SC. 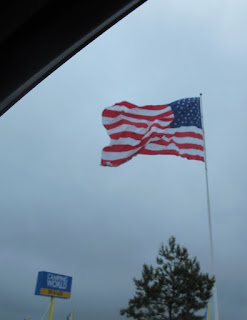 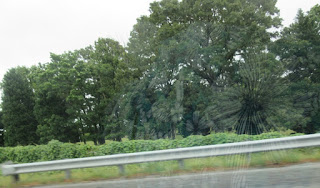 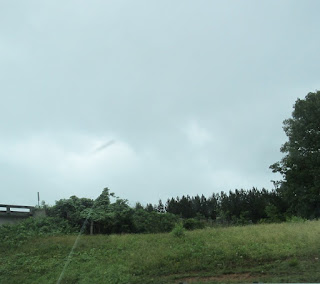 After almost 3 hours we finally hit the North Carolina border. 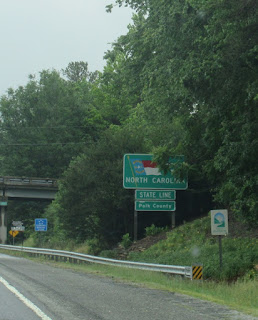 Headed into the mountainous Western part of NC and the foggy mist descended....... 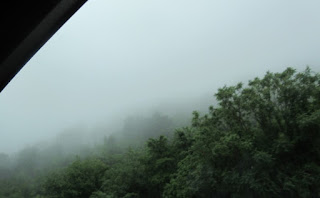 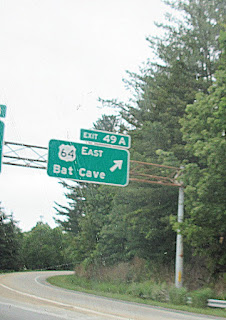 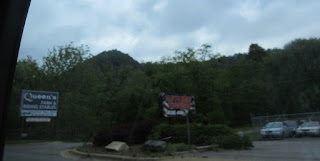 Then more fog and mist and gray skies as we head West on the Great Smokey Mountains Expressway...... 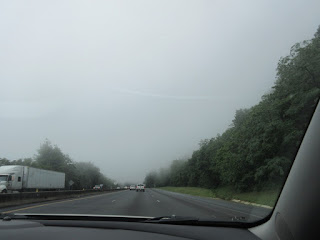 Into the town of Cherokee NC on the Eastern Cherokee Reservation. 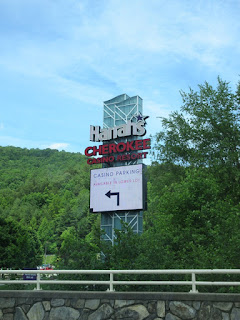 And yes, they have a casino here now and no Sonya Ann, we didn't go in there. lolz

Now go bug her to start writing again on her blog and tell her I sent ya!