Though I haven't talked about my genealogy wanderings in quite awhile I have still been "at it".
I find it's a grand hobby and you just never know what you'll turn up when you start digging.

Since I have now found three separate lines of the de Neville family I am directly descended from(children of Ralph Neville, 1st Earl of Westmorland), I have been burrowing down those rabbit holes. 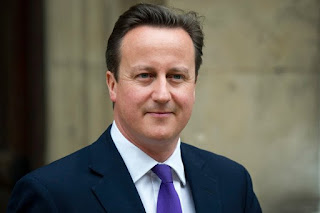 David Cameron's 4 x Great Grandmother, Elizabeth FitzClarence was the daughter of William IV & his long time mistress, Dorothea Bland, the actress.  As the third son of King George III and Queen Charlotte, William wasn't expected to assume the crown.  He lived with Dorothea Bland for 20 years and they produced 10 illegitimate children who took the surname FitzClarence(Fitz meaning of Royal blood and Clarence as William held the title of Duke of Clarence).

William left Dorothea in 1811 due to financial issues.  He married Princess Adelaide of Saxe-Meiningen in 1818.  A match that gave him financial solvency.

The only grandchild of William IV's father, George III, had died in 1817(Charlotte, the daughter of George, Prince of Wales who was next in line for the throne)so none of George III's sons had legitimate issue to ascend to the crown. Not only did William's marriage turn his personal economy around but he hoped Princess Adelaide, being half his age, would produce an heir.  William and Adelaide had two daughter, neither of which lived past infancy.
In 1830, when George IV died, William ascended the throne at the age of 64.  He reigned only 7 years and at his death the crown passed to the only surviving legitimate grandchild of George III, the daughter of William's younger brother, Edward, Duke of Kent and Strathearn, Alexandrina Victoria. The world knows her as Queen Victoria.

This all means that if William IV had married Dorothea Bland, one of their children may have ended up on the English throne instead of Victoria and David Cameron may have been King.  ;-) 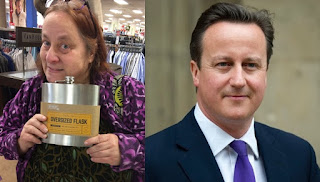 Don't you see the family resemblance?
Well, except for the guy on the  right looks a proper gentleman and the gal on the left resembles a lush.  ;-)