So I left around 10am from Princeton IL to start the 2-day journey home.  I had a long day of traveling this day.

About an hour in I hit something in the road going 60mph on the interstate.  I slowed down a bit and aimed the car so my wheels didn't go over it.  That's the best I could do since the other lane beside me was occupied.
A panel on the lower left dashboard popped off with the impact but after pulling over on the shoulder once I was clear of traffic I saw no damage to the car.
But after that there was a rattling noise when the car was in motion.  Something must have been jarred loose but I was nowhere near any place to have it looked at.  This might have to wait until I got home as it didn't appear to be serious.....yet.
* Once home I found out that a bolt had come loose and that was what was making the noise.  I got it taken care of. 8-)

At lunchtime I was in Champaign IL so I got lunch and ate in the car.   I didn't want to take time to stop at this point in the day.

Since I hadn't have a "Concrete" at Culver's in Wisconsin I stopped for a sandwich and a concrete here in Illinois. 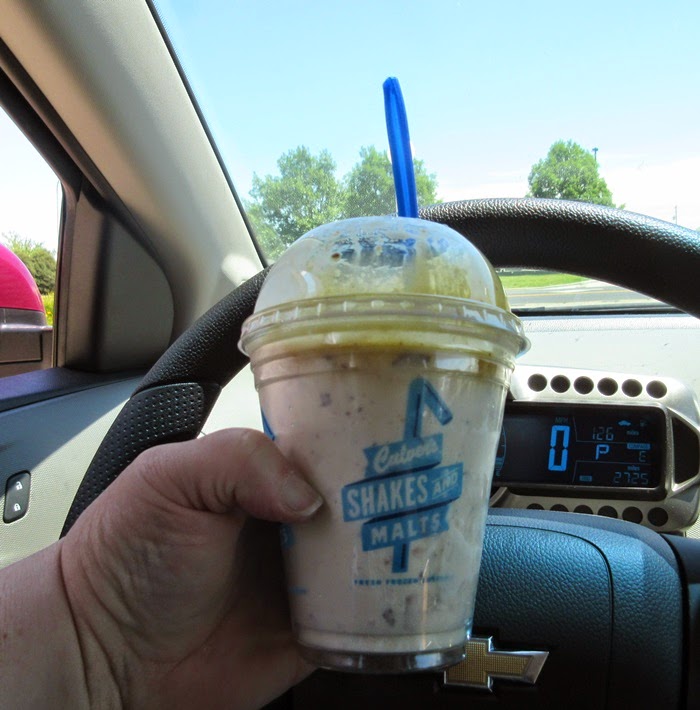 The weather was crappy.  I kept driving in and out of rain.
blech.

I took a pit stop once I hit the Indiana border......omg! is that the sun trying to come out?!? 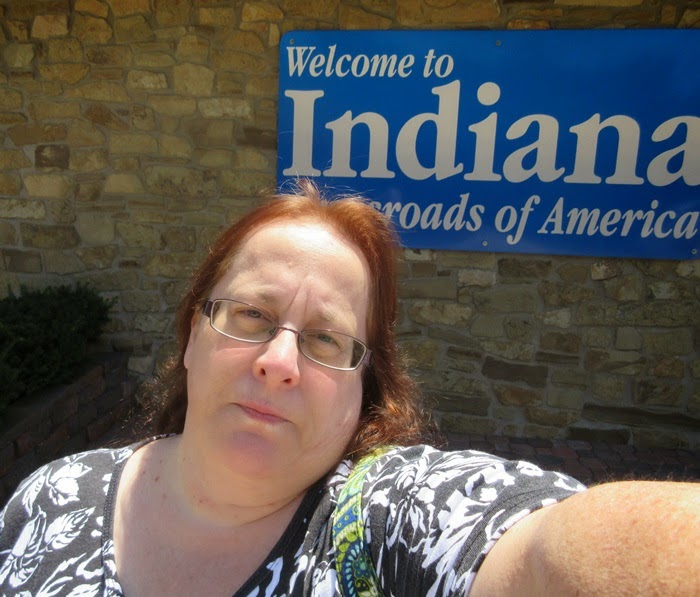 Another 1.5 hours and I was in the Indianapolis area.  I made a stop north of Indianapolis in a town called Carmel.
They had a World Market store there.
I experienced the weirdest traffic circle in Carmel.  It was more like an oval connected to a trapezoid! lol
At any rate, this town is too congested to have traffic circles dangit!
Put in some traffic lights stat!!!
That circle was worse than any traffic I saw this trip, outside of the Chicago Skyway.  I about had a nervous breakdown trying to navigate around that thing.
8-P

I finally get to World Market thankfully and was able to stretch my legs and walk around the store a bit. 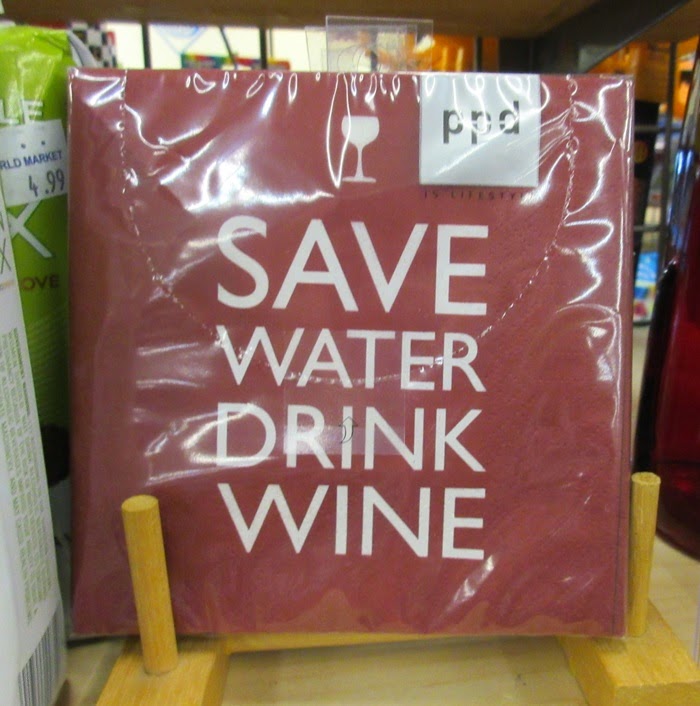 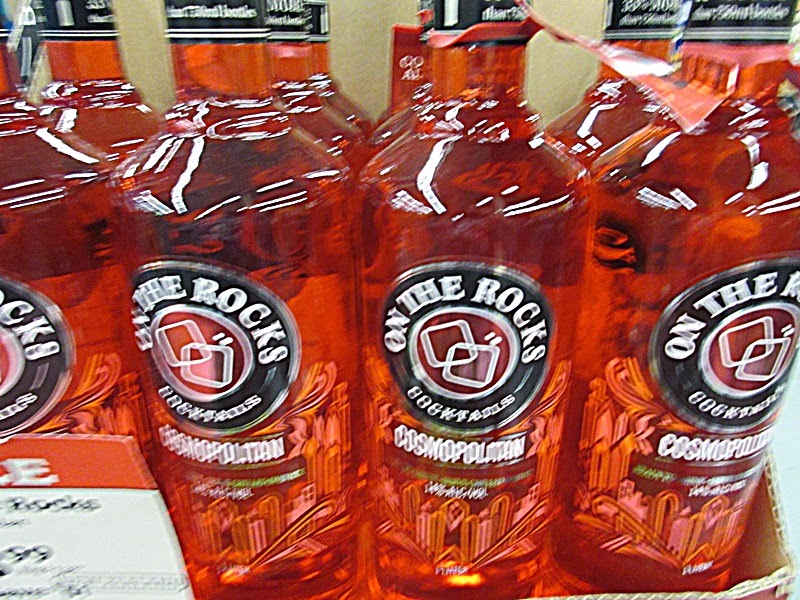 I didn't find any interesting beers here but I did find Abita Root Beer.  Abita is a Louisiana brewery and they make a nice non-alcoholic root beer too.
I spent some time back in April in LA looking for that Abita Root Beer to no avail.
Figures I'd have to go to Indiana to find it! lolz

After a half hour or so I got back into the car and made my way to Fortville, Indiana.
That's where I found my new drinking buddy...... 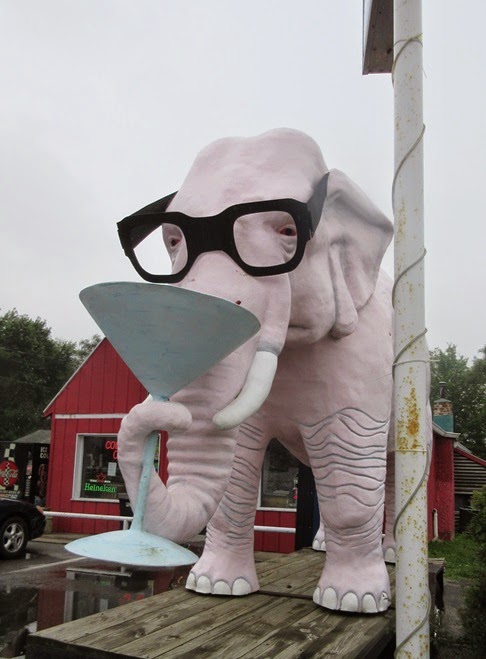 Standing outside of a small liquor store on a street on the seedy side of town.  I had to park in the Dairy Queen lot next door and stand out in the road to get this shot.   A pick-up truck full of Latino men in the back of the truck yelled and made suggestive comments as they drove by.
Oh, the things I do for a good photo...... 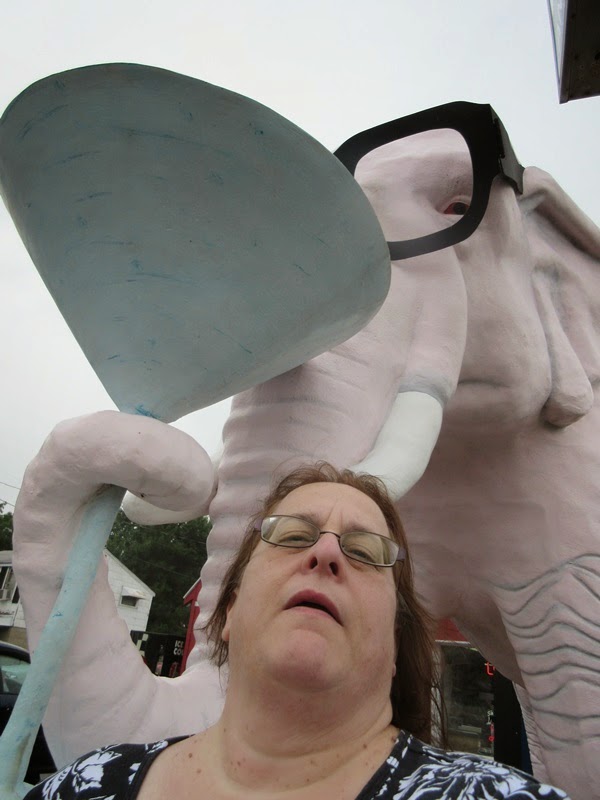 They say he is the pink martini drinking elephant but I like to think that's a Cosmo in that thar glass! 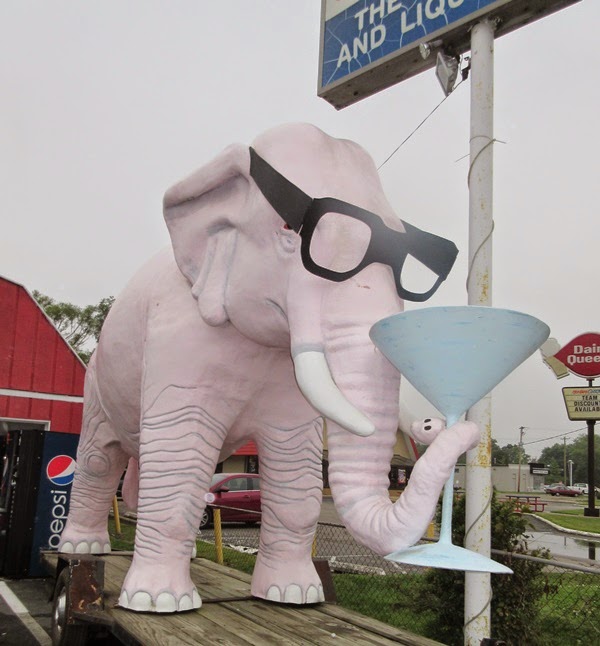 The weather was getting rainier again and the skies were darkening  so I hightailed it out of there so I could get to my motel for the evening before nightfall.

I stopped in Richmond IN, right off I-70, on the OH line.
What an adventure getting into my room here.

I checked in and then drove to the door nearest my room, parked and schlepped in with a big load of stuff.  Set it all down and tried the room key(one of those cards you slide).
Nothing.
No green or even a red light.
I tried 8 more times and still nothing.
So I have to leave my stuff! and walk a long hallway to the front desk.
She rekeys my card.
I walk back and try it again.
Nothing.
Another 10 or so time, still nothing.
So I am getting a bit angry(and tired of this)at this point and go walk back to the front desk.

I guess my tone was not very nice at this point, so the lady rekeys the card(just give me a new card that actually works already! I am thinking), and walks all the way with it to my room, swipes it one time and the door opens.
Then she gives me that look that says, "What? Are you an idiot?!
Bitch.
Maybe the key would have worked for me if you had rekeyed correctly the first time.

I say thanks and then tell the gal, "I sure hope it works again because I still have to go back to the car for something, otherwise you'll be seeing me again(bitch)".

I tried for HOURS to get online and post something to no avail. I got on FB briefly and called it a night.
I gave up and watched some tv and there was no TLC channel.  So I missed that night's "Who Do You Think You Are?" episode.
Oh, my night was getting better and better.

There was some advertising literature in the room too..... 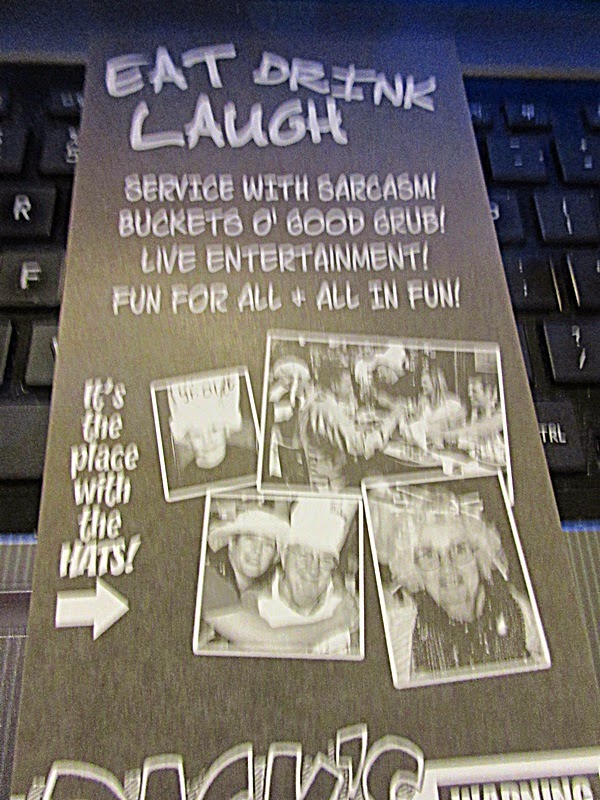 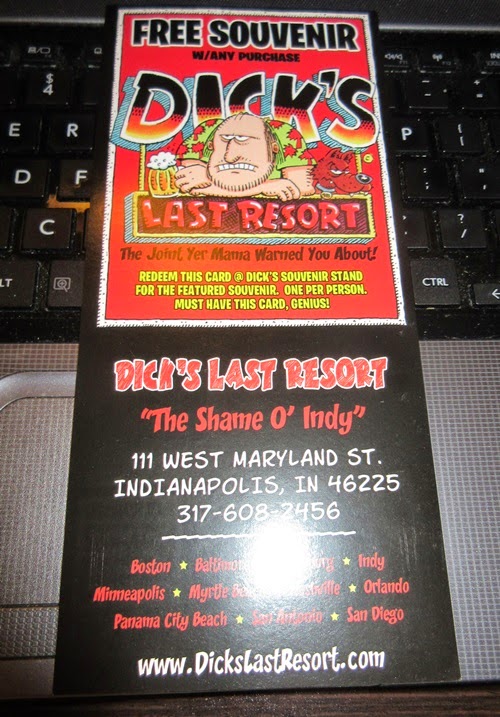 Dick's Last Resort
"The Shame O' Indy".
And they had hats Sonya Ann!
Now we know where to go to if we want to put on hats since the Tea Room closed up.....remember this photo from earlier in the trip in IL....... 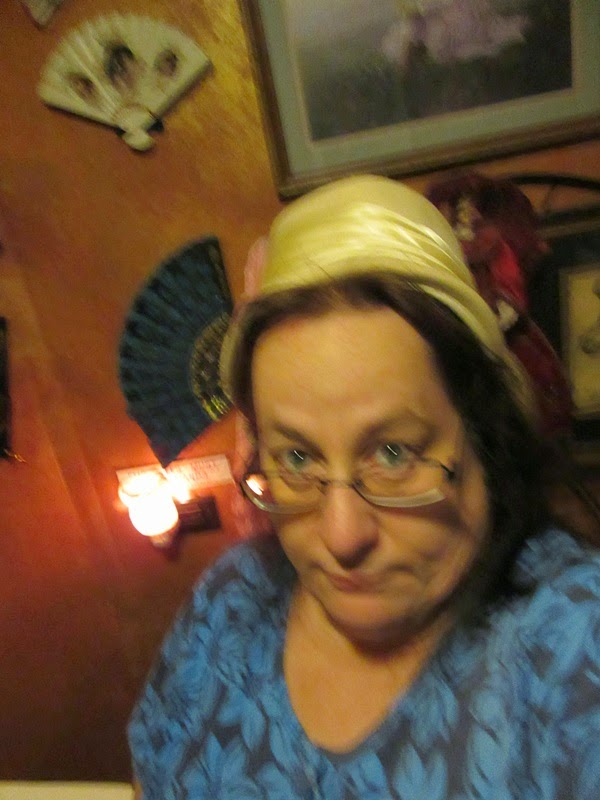 I got to the free breakfast in the lobby early before all the grub was gone.
It was pretty good for a free breakfast and not the worse one I endured this trip.

When I checked out the front desk clerk asked me how my stay was and I mentioned the FREE WIFI that was MIA.  I didn't make any other comments on it, it was what it was.

The clerk took $25 off my bill for the inconvenience.
I can live with that.  8-)
Then I hit the road for another long day of driving.

I made a few stops along the way in Ohio, just to look for craft beers we don't get in PA and to wander around a Walmart.

I found these Wine Slurpees at a gas station convenience store in a little town outside of Dayton...... 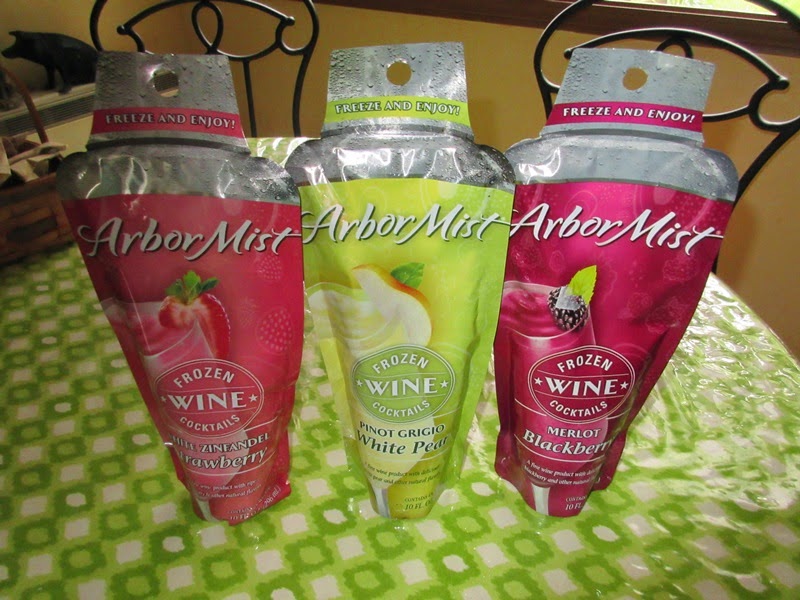 The Merlot one was quite good! 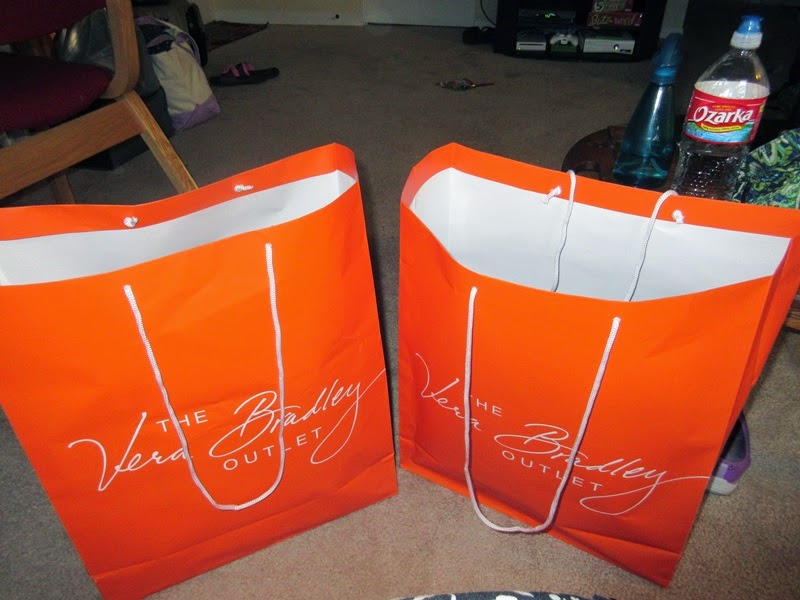 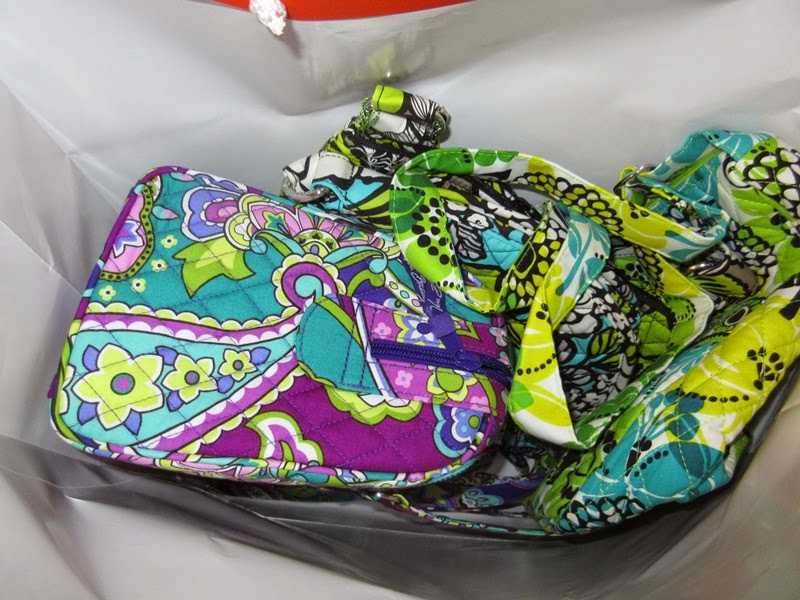 I wandered around the Outlets some more so I didn't get into my son's place until after they were home from work.
I sat at a rest stop along the way and closed my eyes for a bit and dozed off with the sun on my face.  It felt good after the previous day's rain.

I got into Pittsburgh a bit after 6 and my son was home from work.
We had to basically take everything out of the car to get to the beers I bought him on the trip, since they were all packed in the bottom of the trunk.
Fun times.
Ha!

Here's a shot of his beer fridge, now bursting full with new brewskis..... 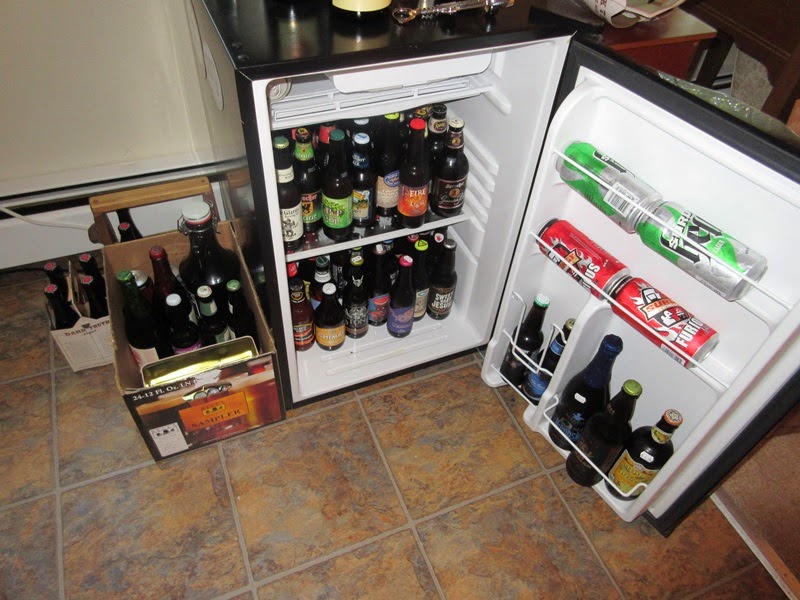 His girlfriend made us dinner and we had a nice visit.
Then I curled up on the couch for bed, while their crazy cat bounced off the walls all night, before plopping down on me for the rest of the night.

My son had the morning off so we trotted over to a café for breakfast when his girlfriend left for work......
The Square Café in the east end neighborhood of Regent Square.
The menu is pricey but it's seasonal, local, vegan, gluten-free and all that crap. 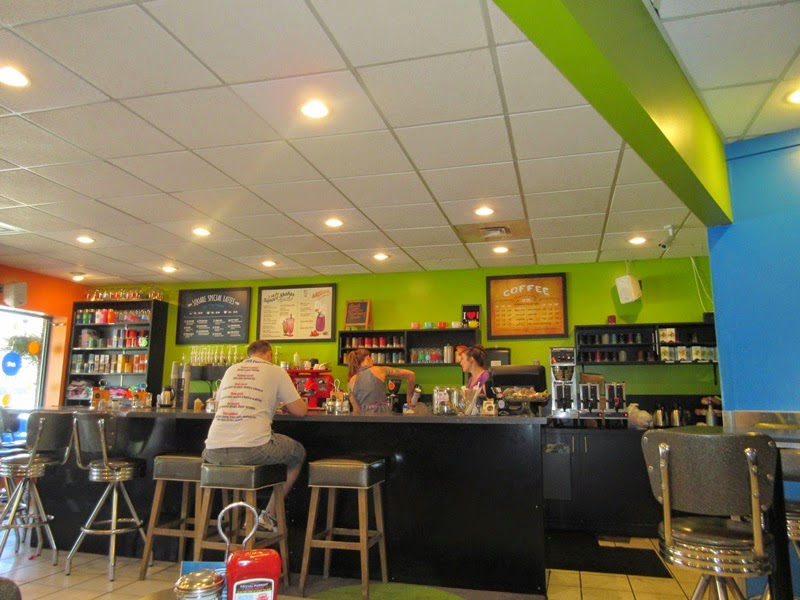 Kind of early for a milkshake but hey!, there was bacon in that shake so it's all good...... 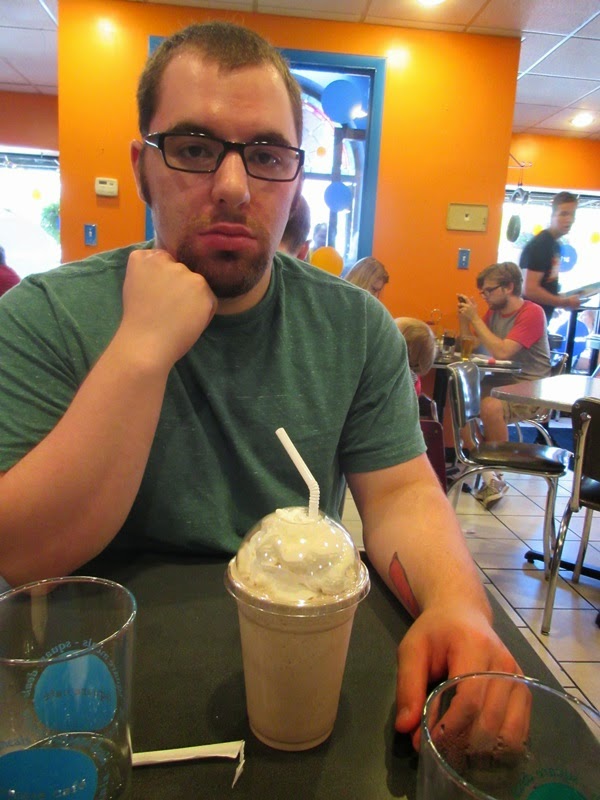 The place was full of hipsters and hipster wannabes.  There was a young family behind us and I swear they sat down right after us and were still trying to order when we paid and left.  The wife had to know every single ingredient in every dish and I heard the words, "Is that organic?" pass her lips at least 2 dozen times to the waiter.  And then the 4 year old kept changing her mind.  She's 4.....give her a limited menu of choices for Pete's sake don't read her the entire menu!!
Just order already....jeez.....can you tell they were pissing me off?

Can you tell I have about had enough of traveling and want to be home?
lolz


Then when we left to walk to the car I saw this sign outside of the Chiropractor's office next door...... 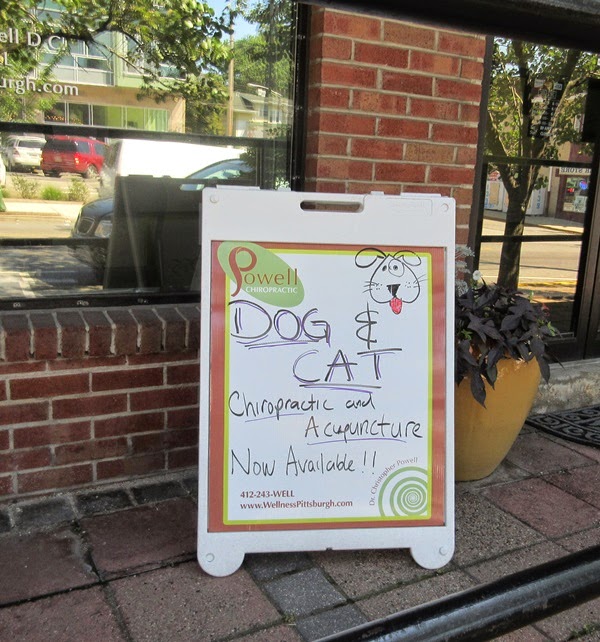 I hugged my son goodbye and made tracks for home.
This 5 hours of the trip was low stress and easy driving once I cleared Pittsburgh.
I was very glad to see my bed......oh, and my Hubs too.....lol

I hope you enjoyed the trip.
I certainly did and though glad to be home I was sad I had to leave each one of my friends I saw along the way.

Oh, and I wanted to show you some cool gifts I was given along the way.

Blanche up in Wisconsin gifted me with these 3 tea towels she did the needlework on...... 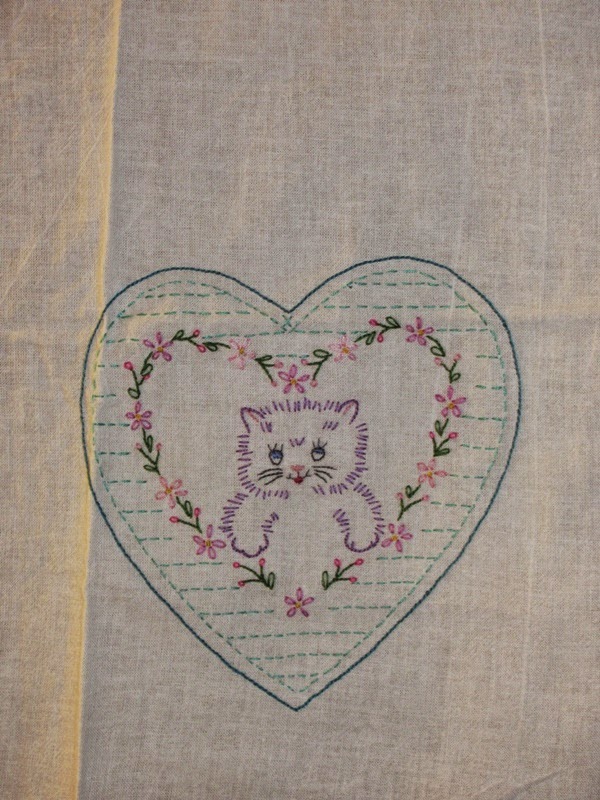 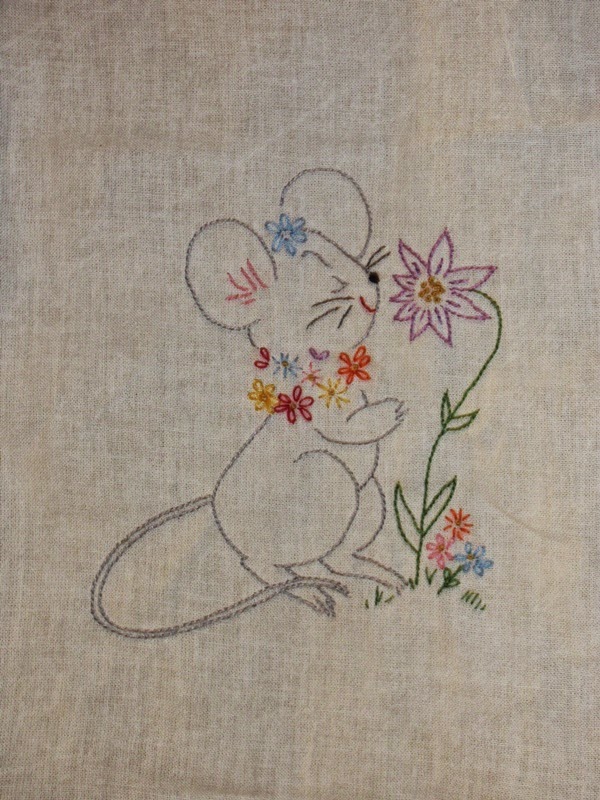 And yes Blanche, I AM USING them!

And McVal's Mother in-law gave me this quilted wall hanging before I left their house in Iowa...... 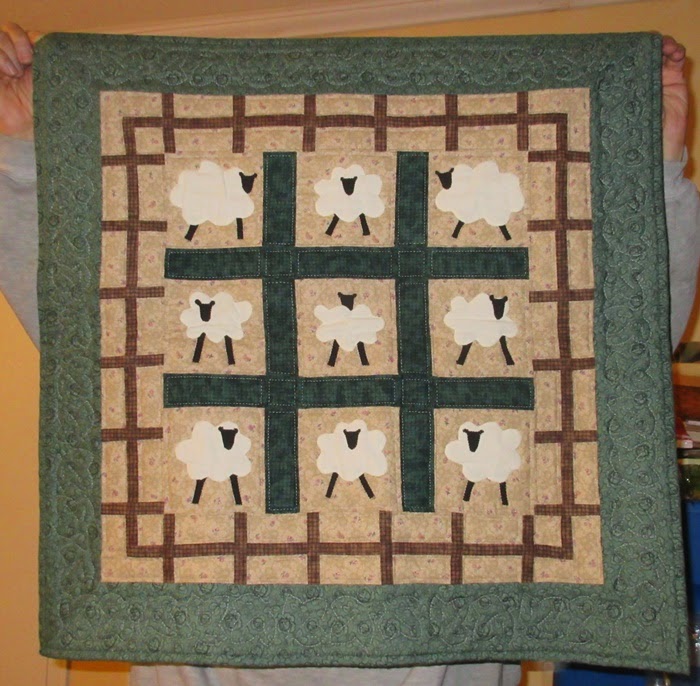 She let me know that she didn't make it(it had been a gift to her)and she didn't have anywhere to display it and I had been so nice to her family that she wanted me to have it.
Wasn't that nice of her?

And every time I take a trip I like to pick up a Christmas ornament as a reminder/souvenir of my adventures.
While Robin and Pam took me to the HL in IL I picked up this little critter...... 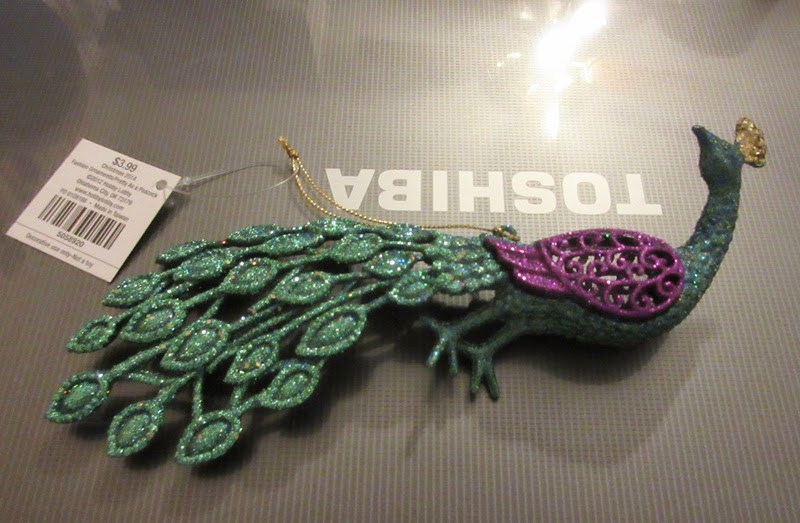 I loved the colors(thought you can't see the iridescence in this photo)and if you recall back in Iowa when Leon was in the duck pen petting the ducks....... 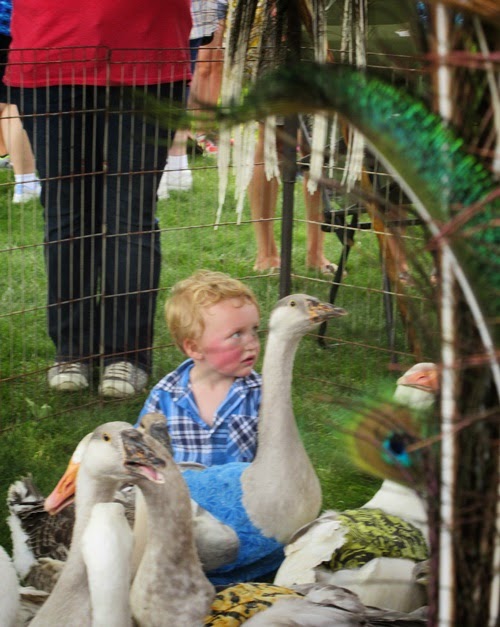 There were bunches of peacock feathers  flanking the pen.  You can see a bit of them in that photo.
I guess I had peacocks on the brain by the time I hit IL again.
Besides that ornie was cheapish and one of the few that weren't breakable that I liked and had a chance of making it home intact.

When I hang it on our tree in a very short few weeks from now I'll think fondly of my trip and all the people and places along the way.

And congratulations!
You made it to the end of this saga.  8-)