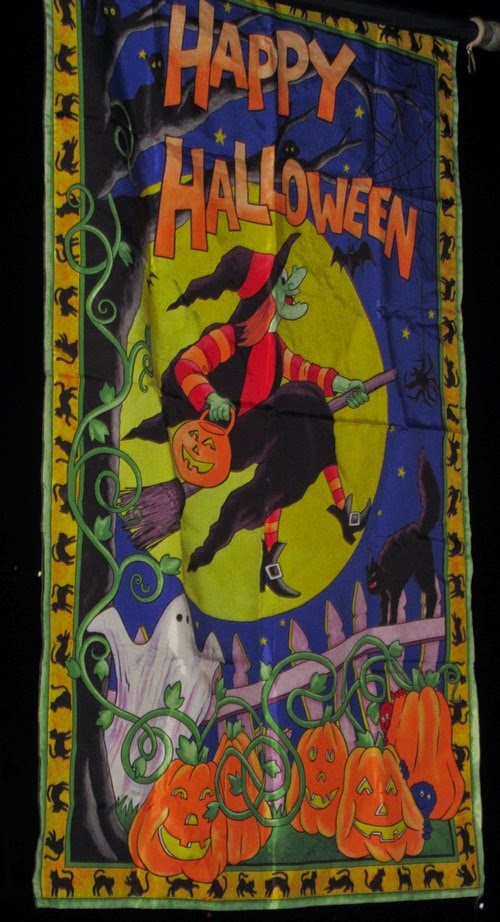 We had a couple dozen trick-or-treaters this year.
Very unusual for our neighborhood.
Hubs mentioned that most of the kids are aging out of trick-or-treating around here and the neighborhood is growing older.
This might be true but I think the fact that our high school had a home football game on Friday is more of a factor.
Football is almost a religion in these parts of PA, even high school football.  I think the fact that most families(including younger siblings of players, cheerleaders and band members)were at the game explains why there were no older kids(over 10)out begging for candy this year. 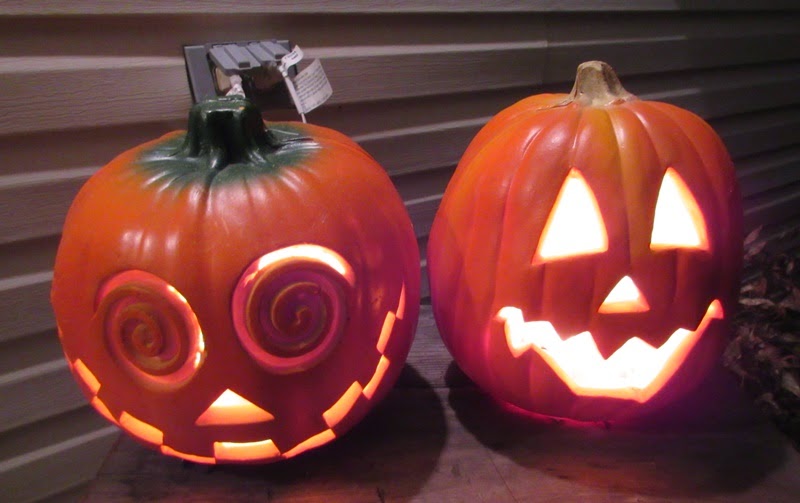 One little girl was especially cute this year.  She was about 3 or 4 and had on a homemade dinosaur cotume(a T-Rex to be exact).
She walked up the driveway while her mom stayed at the street and onto the porch.
I said to her, "Oh please don't eat me scary dinosaur!"

She thought a moment, then took 1 tiny step toward me and said very quietly, "Chomp!".
So cute.
She got extra candy...... 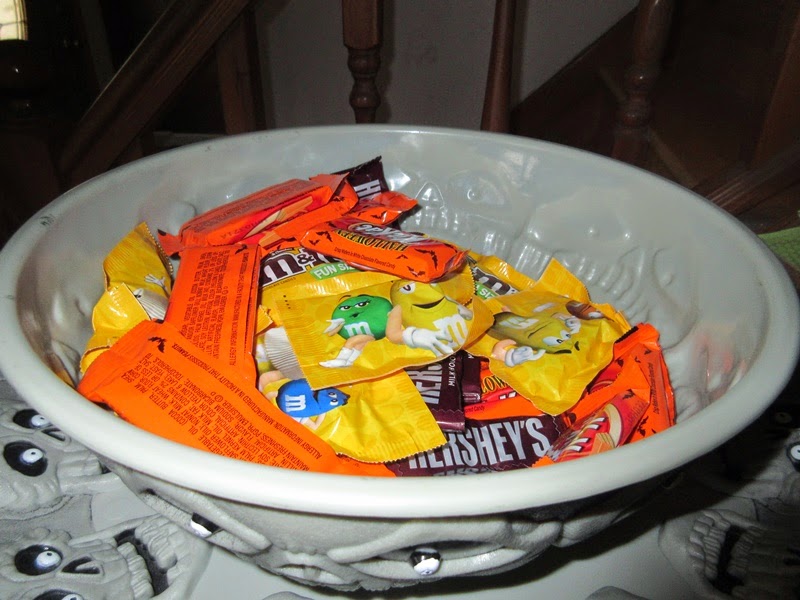 Here's our bowl of candy once the night was over.
It's a huge bowl and held 4 large bags of candy.  Even with giving out handfuls of candy to each T-or-Ter it's still half full!
That's ok.
I can throw what's left into the next package I send #2 Son, or he can eat on this when he comes home for Thanksgiving break in a few weeks.

*  The day before Halloween, the police finally caught "suspected" cop-killer Eric Frein, the latest entry onto the FBI's 10 Most Wanted List from around here.
We use to live in the Poconos, near the town where they held his hearing last week, and I use to drive by that PSP barracks where he shot at the police quite often in my daily life.
Knowing this area I knew it would be awhile before they flushed him out of the woods being as he was a survivalist devotee.  But I didn't think it would take just shy of 7 weeks to run him down!
Hubs and I really thought the authorities would have to resort to issuing Frein tags to the local hunters(hunting--another things that's akin to a religion around here)to finally get him.
"Ok Mack, here's your doe tag, your buck tag and your Frein tag.....now go out and do some killing!"

Hunters have been denied any of the various hunting seasons since the beginning of October around here but they got Frein just in time not to ruin turkey season.
I am also so glad because that's all that's been on the local tv news around here for 7 weeks.

*  I got a letter back from the P&G laundry rebate I sent for on Saturday telling me I didn't spend enough to qualify for the deal.
Obviously someone working on this deal can't do math!
I have copies of everything I sent them to prove I spend enough.
You had to spend $30.
I spent $49.02.
Subtract coupons totaling $14.25.
That gives you $34.77.....well over the $30 required.

Now I am debating whether to just let this go or to send them a letter with copies of my copies and pointing out the math is correct and they have erroneously screwed me out of my $10 rebate...which they will probably ignore and I still won't get satisfaction.
Or I can just start boycotting P&G goods instead.
What would you do?

A sheet of coupons from K-Mart offering me various $ amounts of gift cards for transferring prescriptions.
It was expiring October 31st so I transferred an rx that was coming due the end of October and got a $40 gift card for my trouble. 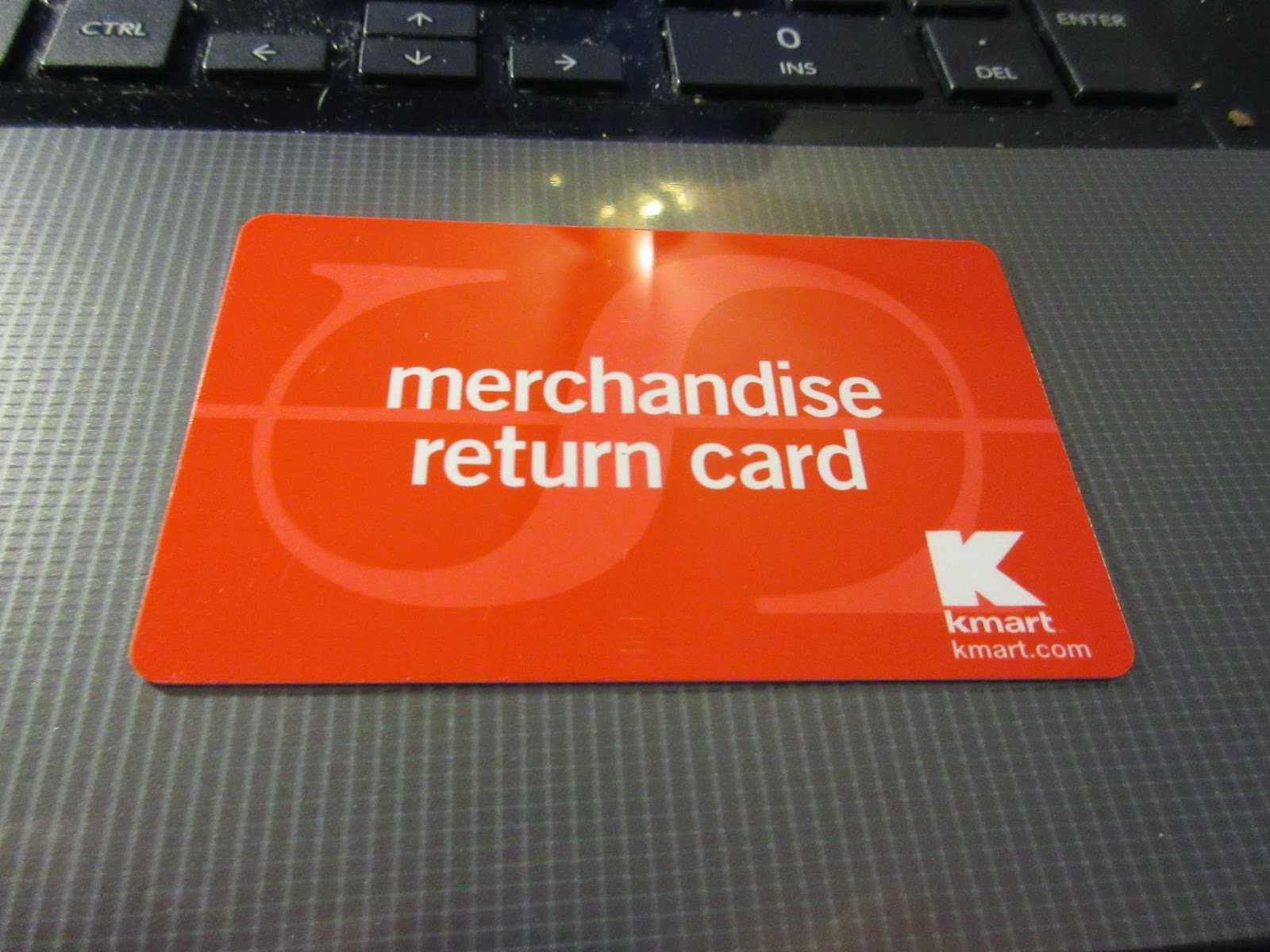 
*  We have officially been cable TV free for 10 days now.
And I am not adjusting well.  Up until now I have been a cable show watcher.  There are very few shows I have watched on network tv for years now.  Big Bang Theory, The Middle and Modern Family being the few exceptions to this.  Though I am not a big tv watcher my fav shows are mostly on cable.  We don't have Netflix of Hulu Plus or watch DVDs here much.  It has been a difficult 10 days for me but I keep reminding myself that for the few shows I am missing it's not worth the $70 we are now saving each month.
The jury is still out on this experiment however.


*  It's the beginning of November so I dug through and organized the freezers.  I have lots of salmon in there as well as pork chops.  I keep putting pork chops on the menu but we always seem to not get around to making them. lolz  I am going to try to eat down the freezer over the next few weeks so I can hopefully get a second turkey cheap and fit it into there....or maybe just a turkey breast since it's difficult to finish off a whole turkey between just Hubs and I.

*  I finally went though my Summer clothes last week.  About time since it looks like it might SNOW today.
bleh.
I had to wait until we went to OC to change out the wardrobe since I needed warm weather things to wear down there.  Now it's time to knuckle down and put away the sandals and shorts.
double bleh.


*  It's coming up on 2 months since we contacted Sears about our split-unit going out on us.  After sending out a repair guy who was clueless TWICE, they finally sent out the guy who installs these things and guess what?.....the whatever died last year on the compressor and was replaced is dead again.  Twice within 12 months they went.
He tried to get Sears to replace the whole compressor, since it seems to be a lemon, but guess who is opting to replace the part again?
Sears.
Have I said how much I hate Sears now??
When we called for service in August we didn't have a/c.  Now we need heat it's been so long. 8-(

Anyway, if last year's fun is any indication of this year's fun with this, the part is having to be shipped from Japan so it will take it's sweet time getting here and the unit getting fixed......again!
Have I told y'all how much I hate Sears lately???
So we hobble along using the baseboards and the ceramic storage heaters that still work to keep warm.
Boy, I can't wait to get out of PA and this house.
Only 3 more years.....

So what's new at your house?

Email ThisBlogThis!Share to TwitterShare to FacebookShare to Pinterest
Labels: Kmart gave me $40 gift card, no cable tv, not many trick-or-treaters this year, our split unit is still broken, P&G screws me out of my rebate, police caught Eric Frein, random happenings in my life