Thoughts on The Government, Self-Reliance and Dubious Morals

* Just Sluggy rambling and ranting on and on about stuff......* 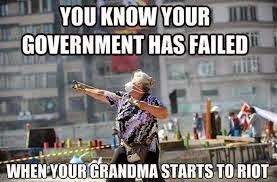 We have on the whole become a society dependent on government.
Since the massive relief and welfare programs begun during the Depression by FDR and continued and expanded through the years by various congressional sessions and presidents, our society is now more dependent on the government to survive than on our own self-reliance.

You can quote the Bible or any of a number of wise non-religious persons over the centuries but being dependent on a system of government is never a good thing.
Why?  Because government is not a warm blooded caring entity.  It is a cold unfeeling entity driven by power and the accumulation of wealth by those in power.

Charity should begin at home, not be held alone in the arms of government.
Charity should be personal and direct and driven by humans volunteering to help their fellow man out of their own pockets(or through their own donation of time and energy in lieu of money).
Charity should NOT be driven by a government taking money from it's citizens by force(in the form of some taxes)and giving this money to others.  The government decides for me who should be supported and by how much and then forces me to hand over cash for these people.
This is NOT what a free people's republic looks like.

As for the current Government shutdown.
I don't want to get into a blame game of who is at fault.
Frankly, as far as political parties goes, they are ALL at fault.  The entire political system we currently have is at fault and a vast failure.

I want to talk instead about your own self-reliance and how you should interact with government if you are dependent on the government for your livelihood via a paycheck.

This is far from the first time the government has had a shutdown and people in government jobs have had to go without pay for periods of time.
A large shutdown happened in the 1980's and smaller ones have occurred since then.
Just earlier this year, with the sequester, there were disruptions in people's pay and delays.
Does everyone have such a short memory that they forgot already about that episode?!

So since the government is not totally reliable if you are being paid from the entity, then why do so many people not HAVE A PLAN on how to stay solvent during these shutdowns?
If you have worked for government for any length of time, you KNOW your paycheck is susceptible to sequestering or shutdown!
It's just asinine not to realize this so take steps to help yourself NOW!
While people who have irregular incomes(self-employed or seasonal workers)must have a plan in place to cover their expenses, anyone who works for a government supplied paycheck should also think of themselves as having an irregular income and have a plan in place to avoid a financial disaster.

Yes, I do feel sorry for those on the government's payroll who are experiencing a loss or delay in being paid but my sympathies only go so far.  YOU are responsible for your family's well being so step up and have a plan in life for these times.

Folks on the Government Payroll need to have a plan in place to deal with a disruption in your pay!
So dish yourself up a big helping of self-reliance and make this shutdown the one where you take action and safeguard your family's well being by starting a Fund for this type of emergency.
Call it what you will.....a Shutdown Fund, a Govt. Emergency Fund, etc.
But have money put aside in case you experience a length of time without a paycheck.

And the topic of self-reliance was again brought home this past weekend to me by another news story......

The Government federal food stamp program went down on Saturday for a length of time.  They were updating their system so the Electronic Benefit Transfer Cards(EBTs)wouldn't work.  There were reports of mass hysteria in some states in various stores when word got out that nobody could use their EBT cards to purchase groceries.

Then 2 Walmart stores in Louisiana decided to let people use their EBT cards during the glitch period anyway.  But they didn't limit purchases to $50 as is the Louisiana state Welfare Programs guideline for emergency situations like this.  They were trying to head off a riot in the store so they just let everyone use their card with no limits and trusted that people would act morally.
HA!

During this time, no EBT card showed the purchase limit that was on a particular card so basically these EBT cards could be used to purchase well beyond whatever your monetary limit was.  Store shelves were cleared in those 2 Walmarts, with folks trying to buy 8 carts or more filled to the brim with food.  Far more food than most of them could have fit into their fridges or kitchens in their homes.
And Walmart will have to eat all these overages, which means prices will go up in the long run for all the honest shoppers out there.
Read about it HERE.

These people exhibited dubious morals by taking advantage of the situation and overspending by hundreds of dollars what they are entitled to on those EBT cards.  They were basically stealing from the system, which in turn means they were stealing from everyone who pays payroll taxes in this country. 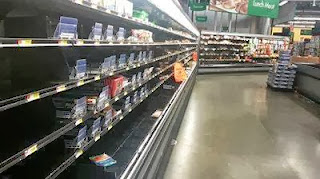 Cleared shelves at Walmart in Louisiana. 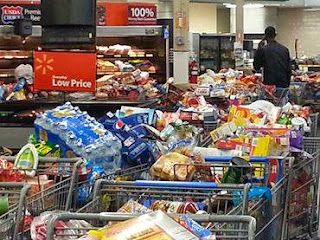 Abandoned carts of food left after EBT glitch was fixed.

I saw this same behavior when I was a student in Baltimore during college when that city experienced a massive snowstorm.  There was a power failure and people broke into stores and there was massive looting during the storm.  People taking advantage of the break down of the system trying to get something for nothing illegally.

If a short few hours worth of computer glitches with EBT cards can cause this kind of situation, imagine what will happen when the government goes bankrupt(and it will happen!)and all those people reliant on the government for their personal welfare are left with nothing.  It will get ugly very quickly in our city's streets.

This is what this country has come to.......filled with a segment of society who feels they are entitled to anything they want, no matter if they have earned it or it is due them.

Stealing from the system(and thus your fellow citizen)is not self-reliance.
It is despicable.

With all the talk about a "moral compass" I feel many people in our society could use one.
Perhaps the government could give one out to each citizen, after it gives one out to every government bureaucrat first. ;-)


Sluggy
Posted by slugmama at 1:37 PM

Email ThisBlogThis!Share to TwitterShare to FacebookShare to Pinterest
Labels: don't rely on the government to live, have an emergency financial plan, self-reliance, some people have no morals, stealing, theft by EBT cards