I'm feeling a bit better today(Sunday).
If the foot continues to improve(being able to put weight on it)it is looking like we'll get to the Baker/Vassar Family Reunion 2013 next Saturday.
Now I just have to get copies made of some photos I want to bring with me.  Photos I need help identifying persons pictured on them.  Plus a photo of the old home place that I don't believe anyone else has seen(or has in their possession).

We needed to get 2 things crossed off the "To Do" List this weekend.
#1 was to finish getting all the coats of paint on the baseboard moulding strips.
And that one got crossed off this afternoon when Hubs finished the quarter round strips. 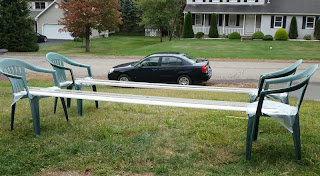 We are now set for the workmen to come back a week from tomorrow(Monday)and cut/install all the crown and baseboard mouldings.
Then to touch up the wall paint we redid and we are ready to decorate, buy furniture and hang curtains.

#2 on the list had to be completed this weekend, because next weekend we can't do this project, and by the following weekend(in October), it would just be too late for the task.

The project is to make and can my Family Secret Pepper Relish Recipe.
It calls for lots and lots of red bell peppers and if you end up having to purchase those at the grocery store it's ridiculously expensive!  So I only make this relish if I can get red bells for cheap, which means either growing them yourself(I've never been able to grow enough of them successfully in a season to have enough to make a batch of the relish)or you can buy them straight from a farmer.  I know of one local farm that grows this variety and they ripen in early September here so you have to time your relish making with the short window of ripe opportunity.  And you have to hope other farm stand customers don't buy them all before you get there!

This window of time is usually the 2-4th weekend of September.
This weekend was weekend #3 so prime season.
So we hit the farm stand yesterday. 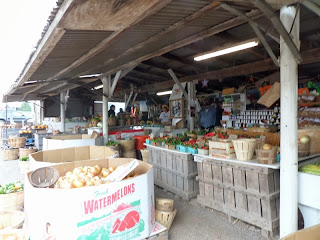 The little pumpkins were already out in bins. In a week or two their Pumpkin Patch will be in full swing.  I hope to get back for pumpkins in October.  I don't have room for lots of puree in my freezer but I can get a few gourds..... 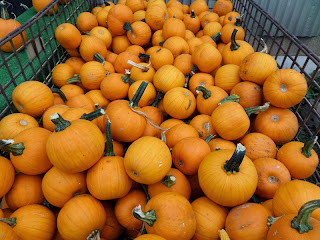 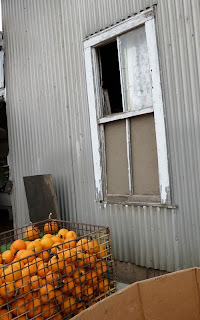 A close-up of a bin of larger pumpkins.  I may be the whitest woman on Earth but those albinos are the whitest pumpkins on Earth.......snort 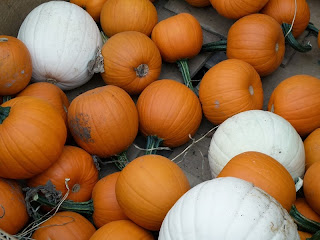 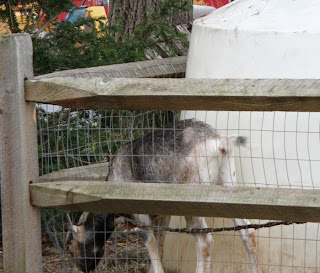 I didn't want a shot of these people but they just kept getting in my way, both while trying to get photos of the critters and while trying to get veggies at the stand.  Honestly, they were obviously "city slickers" and I could have sworn from the way they talked and the way they acted that they were from New York or Jersey(sorry if you are from NY or NJ).  They were obnoxious, pushy and acted like they were the center of the universe.  You know, the stereotypical "goombah"....

Was I surprised that when we left I noticed that their car at PA plates. lol  Obviously transplants.  How I wish they'd "go home".  We don't need behavior like this in PA(got enough of it already).  NYers who know how to behave in public are appreciated and welcomed. 8-)

Another shot of one of Tanner's "stubborn" buddies scratching an itch on the fence...... 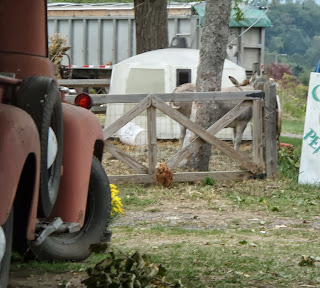 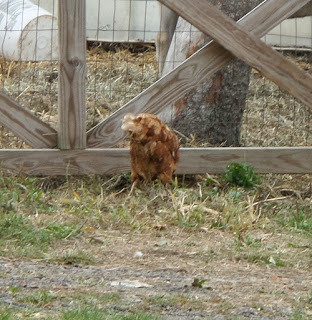 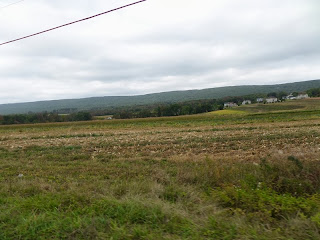 Some of the spoils of our farm stand excursion........ 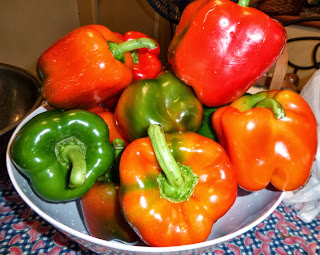 We got 26 peppers(a combination of green and red and many that were both green and red)for $6.00
And these were BIG peppers, not the tiny things you get in the grocery store.  Peppers here run regularly $3.49 or higher per lb.  Even on sale at .99¢ per lb. these peppers would have costs me $26.00!  Holy bell pepper Batman, that's way too much to spend on only 1 ingredient for relish!!
Prepping the veggies....... 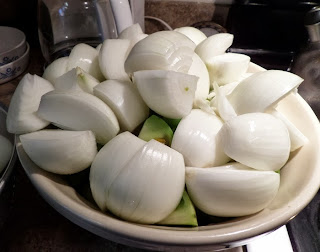 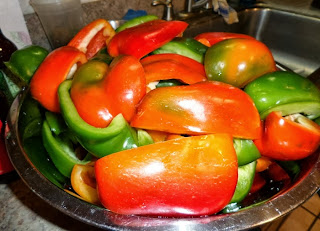 After going through the food processor and a good deal of hand chopping by moi we got this...... 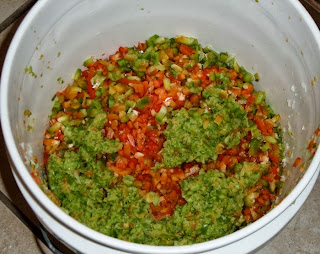 After salting and draining and making the sauce we jarred the relish up and put them into the canner..... 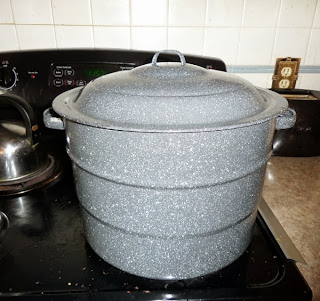 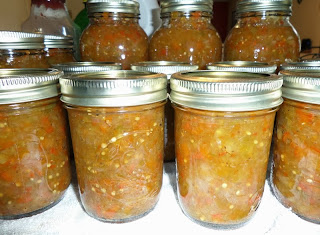 All told 308 ounces of relish cost me $15.75 for the ingredients(not counting any jars I had to buy).

A good price for something homemade.

My sister in-law is addicted to this stuff.  She puts it in/on everything and even eats it out of the jar with a spoon.
I should rename this stuff  "Crack Relish".   lolz

I'm calling the weekend a success since we got both of our Projects completed.

So what's on your plate this weekend?