Say the name of the great actress Greta Garbo and one well known phrase immediately springs to mind...... "I vant to be alone."

Back in the Spring of this year a longstanding mystery in the state of Maine was solved. 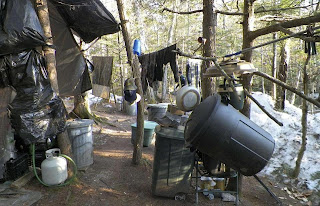 For the last 26 some odd years residents with cottages on the banks of the North Pond near Rome Maine have had their houses broken into and items stolen.  The thefts were long believed to be the work of a hermit living in the woods nearby but no one had ever been caught.

Until this Spring when Christopher Knight was discovered on a surveillance camera tape robbing a nearby Summer Camp.

He claims to have walked out of his life and into the Maine Woods in 1986 and has survived that many winters in Maine living in a tent.  He hasn't purchased anything since 1986, held a job, contacted his family or had any human contact(save for 1 person in 27 years), and has survived by stealing from homes and businesses near this seasonal lake which is part of the Belgrade Lakes system.

Reaction seems to be all over the place to this guy and what he has done....from some folks wanting to lock him up for life to others who admire him and have sent him money for bail and written songs about him.

What do you think?
If given the choice, could you or would you even consider making a lifestyle choice like this?
Could you walk away from your life and all the people in it never to return?

Or do you think he has a screw loose?

And what penalties should the man suffer for his actions?
While he never harmed anyone physically, he did break the law, and wreak havoc on the area's citizens' emotional and mental states as they never knew when he would hit and who's house would be robbed.

Personally I think he deserves a medal(or a straight jacket-your choice)for living 27 winters in a tent in Maine. lolz

Link to an article HERE.

Sluggy
Posted by slugmama at 12:27 PM

Email ThisBlogThis!Share to TwitterShare to FacebookShare to Pinterest
Labels: greta garbo, hermit in the woods of Maine, I want to be alone, man left his life to become a hermit, man lived in the woods for 27 years by stealing from others