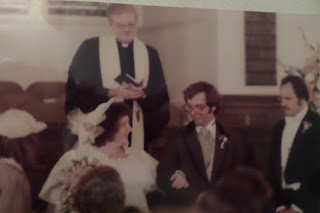 We met in college. He went to Johns Hopkins University and me at Goucher College.
We met at "The Rat" on Disco Night.  He asked my girlfriend to dance and she declined.  Then he got it right and asked me to dance.

By the Spring of my freshman year, we were inseparable.....

Our relationship survived being separated during the Summers while in college.  He worked in Baltimore while I worked all over New England in Summer Stock theater those 3 years..... 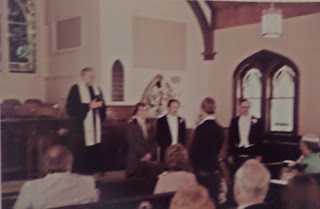 After graduation I moved back to Virginia Beach to live with my mother and work as a waitress and also pick up theater jobs when they became available.  He moved to Charlottesville to go to graduate school.
Guess what I did on my days off?  If you said, "drive to Charlottesville" you would be correct.
Somebody had to go balance his checkbook, right? 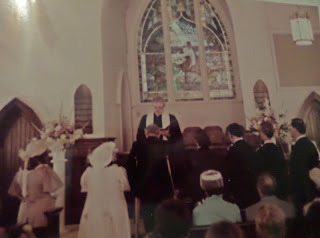 1 week after we married, in the Fall of his second year in Grad school I moved to North Carolina and started and then dropped out of Grad school.  A week later I moved in with my new husband in Charlottesville to his bachelor pad.  That 1st year of marriage was spent living with the hubs and his 2 roommates.   It was my version of "2 and a half men".....

Hubs finished his Masters and we relocated down to Virginia Beach in my mother's townhouse until we got established and found our own place. 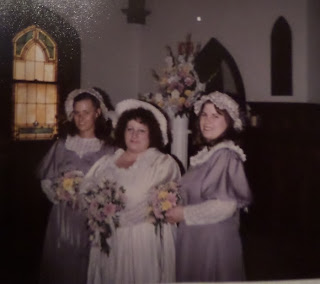 Unfortunately things didn't work out quite the way we wanted in Virginia so after New Year's Day in 1983 we loaded what little we owned and hauled it up to Northeastern New Jersey to move into the basement of Hub's parent's house.
After finding work and 8 months in the basement, we rented out the other half of Hub's oldest brother's 2 family home in West Orange, NJ. 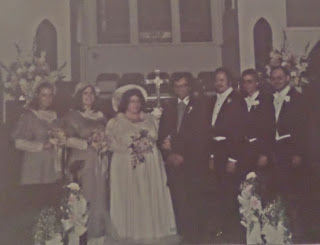 Hubs career took off(and I worked various jobs plus did some self employed type things to make ends meet)and after 2 years we thought we were ready to buy a house and in 1986 we moved to Dingman Township PA, outside of Milford in the Poconos.

That is where we learned the meaning of WINTER as that area averaged 100 inches of snow per Winter.
We also learned how expensive electric heat could be and the joys of losing Power in the dead of Winter on a regular basis.

Unfortunately, money was real tight there(who knew house expenses were so much!?!)so I got a job or two while Hubs commuted to NJ 5 days a week for his job. 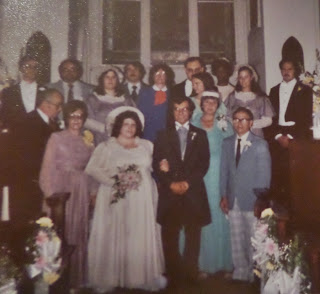 We got pregnant a few years later but I suffered a miscarriage when I developed appendicitis.  Some fertility treatments followed but with no luck.  We became foster parents and I quit my job to stay home.
While fostering a year or so later, we finally became pregnant again.

Our oldest son was born in 1991, our daughter followed quickly after in 1992 and our youngest son in 1996.
The years passed.
We survived congenital defects with 2 of our kids and the sleepless baby years.
We barely got through the potty training.
We lost a beloved pet and had to pass another pet on to another family.
Vacations happened, schooling happened and we lived life.

Our house seemed to grow smaller as the kids grew and the days went by until our 1000 sq. ft. house just wouldn't do any longer.
In 2000 we moved further west into PA into a bigger town(and a bigger house) for the opportunities it would afford our kids. 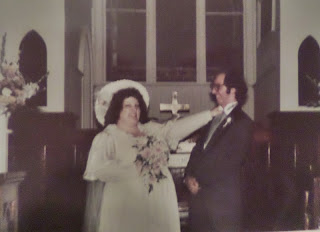 More years passed as the kids grew some more and we entered the dreaded Teen years.
We survived teaching them to drive and the high school drama.
We survived more pets(4 dogs anyone?)and saw 2 of them go over the Rainbow bridge.
And then the kids started moving away from home for college and beyond and the house sighed in relief and then started growing ever so larger.
And Hub's career prospered some more and we were busy living life.

The next thing you know, I turn around and it's 31 years since we said, "I do." and I wonder where the heck the time went?


Which brings us to today, 31 years into this journey. 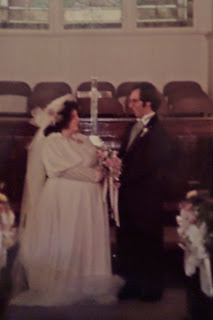 Sluggy
Posted by slugmama at 7:36 PM

Email ThisBlogThis!Share to TwitterShare to FacebookShare to Pinterest
Labels: 31 years living life together, 31st wedding anniversary, happy anniversary to me and hubs, today is our anniversary