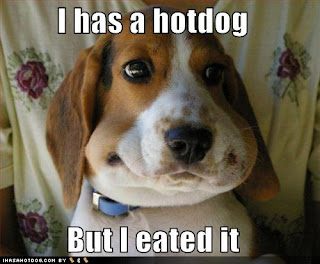 "The time has come," the Walrus said,
"To talk of many things:
Of shoes--and ships--and sealing-wax--
Of cabbages--and kings--
And why the sea is boiling hot--
And whether pigs have wings."

"But wait a bit," the Oysters cried,
"Before we have our chat;
For some of us are out of breath,
And all of us are fat!"
"No hurry!" said the Carpenter.
They thanked him much for that.

"A loaf of bread," the Walrus said,
"Is what we chiefly need:
Pepper and vinegar besides
Are very good indeed--
Now if you're ready, Oysters dear,
We can begin to feed."

"But not on us!" the Oysters cried,
Turning a little blue.
"After such kindness, that would be
A dismal thing to do!"
"The night is fine," the Walrus said.
"Do you admire the view?

-excerpt from "The Walrus and the Carpenter" by Lewis Carroll


Yep!
Like the Walrus & The Carpenter and the pup above, I eated it......I eated allll over Maine and I eated it ALL....but it was NO Hot Dog!lol

and did I mention CLAMS yet?

And not those nasty rubber band tasting/texturing clam strips you get frozen in the grocery store.


Oh and then there was the excitement on the trip home....
and then the *fun bonus* after I got home later that night, which stretched into even *MORE FUN* for the next 2 days.
I will spare you the lovely pictures of the Fun Bonus Times later in the week(when I get around to recounting the trip and it's aftermath).

So I'm back online and slowly getting up to speed and getting laundry done and my bad self's head back in the game called REAL LIFE.
And I'm doing it kicking and screaming in protest the entire way!!!
Ayuh....

So bear with me as I move rather slowly with new posts and tying up old business from last month, and most importantly as I catch up with all my online friends' blogs and lives.

"It seems a shame," the Walrus said,
"To play them such a trick,
After we've brought them out so far,
And made them trot so quick!"
The Carpenter said nothing but
"The butter's spread too thick!"


"I weep for you," the Walrus said:
"I deeply sympathize."
With sobs and tears he sorted out
Those of the largest size,
Holding his pocket-handkerchief
Before his streaming eyes.


"O Oysters," said the Carpenter,
"You've had a pleasant run!
Shall we be trotting home again?'
But answer came there none--
And this was scarcely odd, because
They'd eaten every one.

Sluggy
Posted by slugmama at 10:51 PM