Here's the July To-Do List and how it all turned out last month.


*  Pay Bills  DONE  Always at the top of my monthly list.  Pay everything due and no slacking here. ;-) 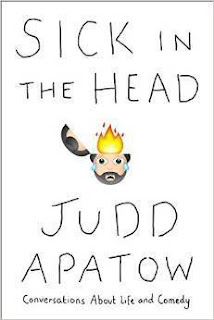 "Sick in the Head: Conversations About Life and Comedy" by Judd Apatow

If you've been in a coma the last 20 years and don't know, Mr. Apatow is a prolific writer/producer/director of both tv and movies.

In high school Judd began his career in comedy by joining the school's radio station and going about contacting famous comics to interview them.  Many comics took his calls since he said he was from the media(didn't tell him it was a high school radio station)and he taped the interviews on a cassette player.  He picked their brains about life and comedy.
This book is a compilation of those interviews(plus a few non-comics)along with ones he's conducted since becoming a comic writer and along the way to becoming an award winning writer/producer.

He started as a stand-up comic, went on to write for "The Larry Sanders Show" and is best known as the writer of the movie "The 40 Year Old Virgin" and others.
He has in some capacity or other worked with just about every big name in the comedy world today-writers, actors and producers.  Most anything you've paid a movie ticket for or switched a tv on to watch he's had a hand in.

This was a fun(but very, VERY long-over 400 pages!-read)but great read except for the conversations with some folks I really don't care for......I'm looking at you Lena Dunham.
It also gets bogged down in Judd Apatow's neuroses but then again, without these he wouldn't be the comic genius he is(but every interview has his side of the conversation so you'll get tired of hearing about his childhood and hang-ups pretty fast). lol

If you can get your hands on a copy and love this area of the arts, do pick it up and take a look. 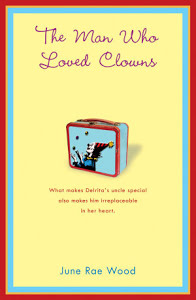 "The Man Who Loved Clowns" by June Rae Wood
I found this book among droppings from my Daughter's old room when we were cleaning it out.  It's a YA story but was enjoyable(plus a fast read and after slogging through the book above I needed a quickie).
Based on Ms. Wood's own life/her Down's Syndrome affected brother this was a thoughtful and warm book about seeing the world through different eyes.  A love letter to her brother and dealing with difficulty in adolescence.
If you have a 10+ year old in your life(who someone who is young at heart)who likes to read, find a copy of this for them to enjoy. 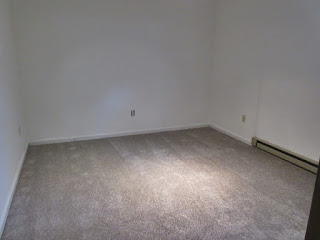 After waiting for what seemed like years(it was only 3 weeks)the carpet got installed.  The room is now nice and clean.

*  Move My Stuff into Bedroom  IN PROGRESS 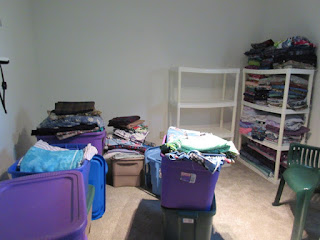 I am now filling up the room with my crap.  My 2 shelving units were put in first and then all my tubs of fabric were brought in so I could go through it all and decide on what to keep and what to get rid of.
It's a work in progress still...... 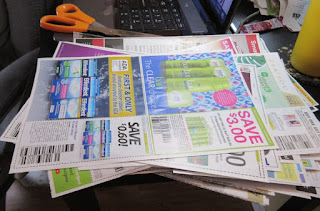 Every month(or I try to do this every month to cut down on clutter)I pull the coupon inserts where most if not all the Qs have expired. 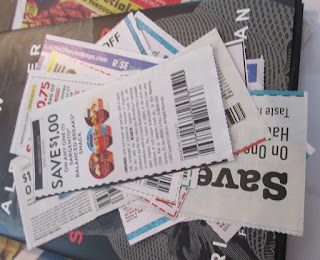 I'll clip and toss into my coupon envelope the ones that aren't expired if I think I'll use them.

This last shot is the stack of whole inserts left after the purge.  Not much of a stack really. lolz 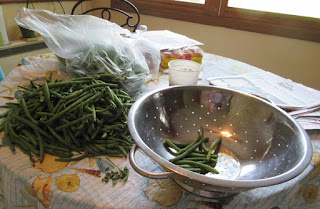 After blanching I put 7 x 1 lb. bags into the freezer and had a sore thumbnail for my troubles(if you've every snapped beans you know the struggle).  ;-) 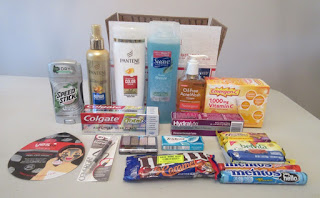 I was a bit late getting this up in July due to some health issues and a trip to the ER and the fallout from that.  Then we had a long distance medical appointment and all that entailed but I did get the Giveaway up before July was over.

It went out earlier this week and should be arriving sometime today at it's destination. 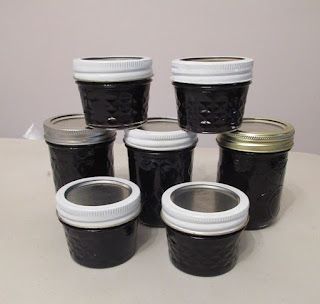 Within the span of 6 days I found deals on both fresh local blueberries and not-quite-local(nobody grows it up here)peaches for .99¢ lb. each. 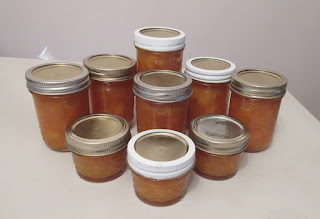 I set about to making jam, not a ton since we aren't big jam/jelly eaters here.  We do like to have some available.  I put a bit of nutmeg and cinnamon in the blueberry jam.
I ended up with 5 half pints of blueberry and 8 half pints of peach(besides the containers of each in the fridge to use soon).

*  Keep on top of Garden  DONE 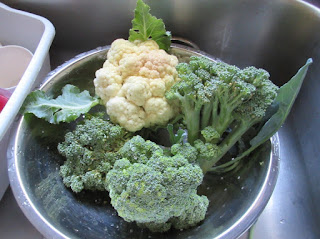 While Hubs does the bulk of the weeding in our tiny garden I do the picking and monitoring.  We picked the bulk of the broccoli and the first of the cauliflower in July.  Everything picked was either eaten or blanched and frozen for later use.
I think the summer squash will be a bust and the cucumbers will do poorly as well.  The Morning Glories however are just taking over! lolz

I guess it's about time I introduced the newest member of the family here at Chez Sluggy.

We added another puppy to our household. 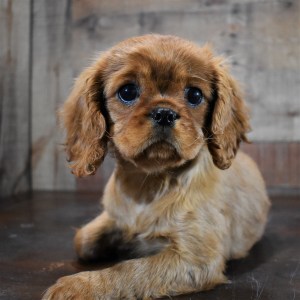 Chester was pining for a playmate since my daughter's dog moved to Texas and we found an older puppy that we thought would be a good match for him and us. 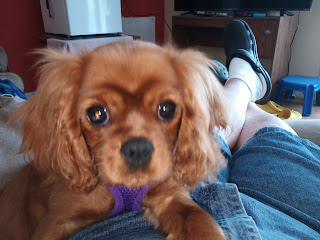 We renamed her "Dixie Belle".  She is a Cavalier King Charles Spaniel, the "Ruby" type(a mahogany color).  Think Cocker Spaniel but smaller, more compact.
Now I have the redheaded child I always wanted. lolz 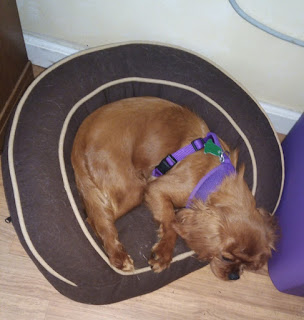 Dixie has fit right in here and she and Chester get along very well already.  While Chester is our fierce guard dog, Dixie is laid back and the only time you hear her bark is if Chester is ignoring her and won't play. lol
We are still working on the house training and teaching her doggy manners but it's progressing well. 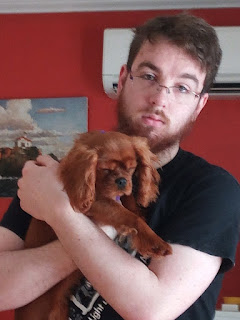 She is just a love who wants to be near you or on you and she has bonded with Ex- College Boy(and him to her)quickly.
Cavaliers are the largest of the toy breeds and were bred in Spain(where the term Spaniel comes from)from it's predecessor the Toy Spaniel and soon spread throughout Western Europe.  They were brought to Scotland from France by Mary, Queen of Scots.
Cavaliers are named for Charles II, the Cavalier King, of England as he was exceedingly found of the breed.  He was said to travel with and keep 3 of these dogs on his person at the Royal Court.  They were bred to be lap dogs for royalty.

They are called "love sponges" in the dog world because they just want to be with their humans.  Not a dog you want to get if you don't have someone home most of the time so perfect for retired folks. 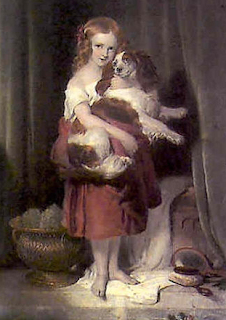 
*  Continue to Clean Out Garage  IN PROGRESS

Still plugging away at clearing out stuff from the garage(and the house). It's been too hot to spend much time out there.  Some empty boxes as well as some of Hub' stuff have been thrown away.  Come September when the weather cools off more we'll focus more on going through more crap out there.

We didn't get around to moving $$$ around in July. sigh.  Just too many other pressing matters going on last month. 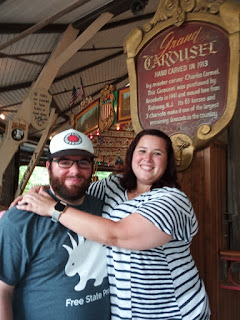 Our Eldest son and his GF came for a visit for a few days in July.  Eldest turned 28 last month so there was a birthday cake and gifts involved.  We had a family cook-out with the BIL and nephew too and also took son and GF to a small amusement park West of here one day(man was that expensive!).  It was a laid back fun visit.  Here they are in front of the antique carousel ride at the park.
They couldn't stay long as the GF had to get back to work at Mount Vernon and son had to return to his teaching job the beginning of August.  But it was nice to see them.

That's all from here.
How did your To-Do List turn out for July?