* Read 1, 2 Books  HALF DONE  I was on course to finish both books but I forgot to bring book #2 on the trip so didn't quite finish that one. 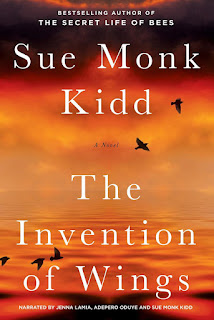 I read Ms. Kidd's "The Secret Life of Bees" last summer and liked it so when I saw this book at Ollie's I picked it up.  It is based on the life of Sarah Moore Grimké though not a straight up biography.  Ms. Kidd added a character(also based on fact but largely fictionalized)to build her tale.
The book begins on Sarah's 11th birthday and she is given a slave of her own age as a gift.  This triggers something in Sarah and opens her eyes to the society and culture around her in Charleston, South Carolina of that time and her own sense of justice and morality.  The book then follows the intertwined lives of Sarah and her slave, Hetty, as well as Hetty's mother, as they grow and live in the years leading up to the War Between the States and beyond.

I felt a kinship to Sarah, as I too grew up in the South, not in the 1800's but in the 1960's, where I saw much injustice and inequality myself, in the society and in my own family.  I felt out of place and time among my family and those around me.
I had a similar experience as Sarah, on my own 10th birthday, when I was not allowed by my parents to invite a classmate of mine to my birthday party, because she was black.  This triggered in me, like Sarah's birthday experience did in her, a consciousness and dissonance of the world around me.

I give this book 3 stars and it's worth a look.

* Clean House  DONE  While Kim may not agree with this we did get a LOT of cleaning done in the house. ;-)

* Move Some $  FAIL  I am still waiting on Hubs to sign off on moving some $. sigh

* Start Organizing Items to Sell  DONE  I've got items in tubs in the den and living room, awaiting weighing and then listing.  I still need to go through the diaper packs I have left and list those in the local site.  I'll go live with listings later in October.

* Purge Q Inserts  DONE  Got the coupon inserts whittled down to what hasn't expired yet.  Go me! ;-)  I also purged my coupon pencil case while on the trip.

* Get Rid of Landline  FAIL  Hubs doesn't feel comfortable yet with ditching the landline.  I told him to at least get rid of the long distance component but he's not done anything yet. sigh.

* Hold Giveaway  DONE  Not only did I hold 1 Giveaway but I threw caution to the wind and held TWO Giveaways in September.  Just call me a wild and crazy slug......

* Mail Giveaway  DONE  Everything got mailed and received while I was away. rah.

* Put Garden to Bed  FAIL  I got most of the garden cleaned up but ran out of time before we left for New England.  I figured I'd come home to everything still out there being dead and such but it's been unusually warm here while we were away(and still now that I am back)and some plants are still hanging in there(I've even got two teeny tiny Japanese eggplants growing again!).  The garden will definitely get finished up and put to bed in October.

* Finish Trip Plans  DONE  One last minute motel changed but all the plans got finished and mostly came to fruition.

* Pack for Trip  DONE  I forgot 2 things(1 meds, 1 book)but other than that the packing was great.  Too bad we didn't have room in the car for more Diet Coke and water bottles.  8-))) 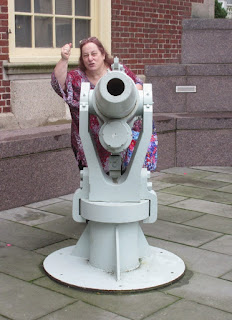 Too bad this harpoon cannon wasn't loaded or I could have taken Kim out before she beat me at finding change on the ground during this trip.  Arrrrrgh!


How did you do on your September goals?