I've been putting this chore off for a bit.....getting my passport.
I just don't like dealing with bureaucracy and forms. 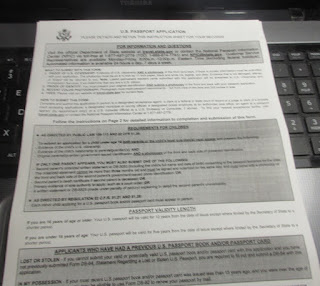 So first off I had to go find out what I needed in terms of paperwork to apply for a passport.

What they use to give you in the state of Virginia where I was born can't be used now for a birth certificate.  It was fine back in the day for applying for a SS card and getting into school as a child, but no, it's too old and dated and doesn't have a raised seal.

If I was going to VA soon or lived there getting a birth certificate would be a piece of cake.  I could have just gone into any VA DMV office, filled out a form, paid $14 and bingo, bango, gotten a birth certificate on the spot.
Problem is I am not in VA so you have to mail away to the Vital Statistics Dept. in Richmond and wait for them to do the search, print one out and mail it off to you.  Which might take up to 2 months?
And then I still have to apply for the passport and wait for that to get back to me too?  bleh.

So I spent the BIG MONEY and used a service.  They insisted on overnight UPS too. ugh.
So the UPS guy is at my door wanting a signature and then hands this mangled mess of an envelop e to me....... 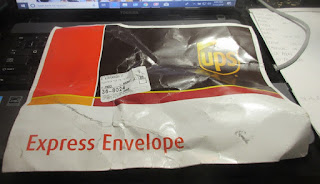 I won't show you the birth certificate because well, that's personal info.  But I can assure you that even though it was still in one piece it looked as mangled as the envelope it was in.
So we had to press the certificate under a stack of heavy books....luckily we have quite a few of those in Hubs library. ;-)

* Obtain  a passport photo.
So I had three options here-photo from Rite-Aid, photo from CVS or photo taken at PO where the application had to be turned in.  I went with Rite-Aid as it was the least expensive option after using a coupon and my 20% Wellness discount.
They had a new cashier take it with supervision.  The photo looked a little too big to me but I paid and left with it.

Get to the PO to put my application in and the lady says that photo's too big!  FYI-from the top of your head to your chin can't be any longer than 2".  She had a template of an oval of a head that is the correct size and yep, this photo was waaaay too big!
So I paid another $15 for her to take another photo. sigh

I stopped in at Rite-Aid and let them know their photos don't meet the requirements and showed them the difference between the photos they took and the extra one from the PO that I got to keep.
So I got a refund of the $5.94 I spent.
Photo done.  Check!

*  Fill out the application.
That was easier said than done.  I had to fill the paperwork out THREE TIMES before I got it right.
Left stuff off the first two times and didn't catch it before printing it all out. ugh.
Three times the charm though.  Check!

Made an appointment to put the application in/take the photo.
The process was pretty quick but I had a scare when I handed her my birth certificate.  It's suppose to have a raised official seal on it.  Hubs and I couldn't find a raised seal when we inspected the document when it arrived so I thought maybe VA doesn't do a raised seal on their birth certificates(It does have a watermark though).

The PO lady kept rubbing the certificate feeling for a raised seal(there were several places on it with seals).  I started panicking but then she turned the certificate over and there was a larger seal in the middle on the back that was raised.  Thank the Lord! 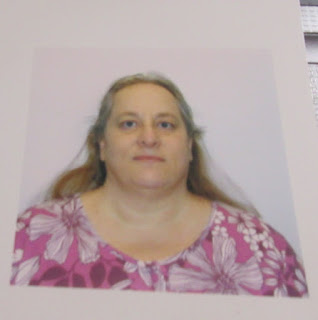 So now we wait......
And when the document arrives this large nosed beast will be able to get back into the country when and if she leaves it.

Email ThisBlogThis!Share to TwitterShare to FacebookShare to Pinterest
Labels: applying for your passport, birth certificate, getting a passport, passport photo