Just some random things going on around here........

*  I finally got around to posting the Eating Out and updating the Totals on that page HERE,
April's total was high due to a short trip down to see Eldest son.  We paid when going out but Eldest son picked the restaurants and I have to say......he's all about expensive beer and food! lolz
Next trip, either we'll pick the places or put a price limit on him. ;-)

May wasn't bad in one way but bad in another way--Not bad since the Birthday eating out was paid for last year with gift cards bought then and we had no Trip Eating Out....Bad in that the regular day-to-day Eating Out was $170.04 for the month. Ugh.  That's a LOT of take-out!

We are still under $1K for the rest on Eating Out/Take Out so far but the year's not even half over.

*  The end of June marks the First full Year of Hubs retirement.  If things continue as they have been going now, he needs to find things to do outside of the house or we need a bigger house!!! ;-)
Some days it's all I can do not to want to put my hands around his neck and throttle him.

*  I am beyond frustrated with trying to plan some travel this Summer.  I thought I'd take the 2 kids living here down to VA for a bit to see my brother and go see their sibling/my eldest but both the 2 kids started jobs right away after school let out. Then  I though Eldest was going to come here straight after his school let out(June 15th)and then we could travel down to VA to see my brother/his uncle and make some day trips to OBX but now eldest is going to teach Summer school so he's wedging in a trip here for a few days between that ending and when he has a friend coming from NY to visit him at the end of July.
We can't go anywhere in August because daughter has two trips planned then, one at the beginning of the month to TX and one near the end of the month to a conference in Boston and we have to take care of her dog because she won't board her.  Plus I had two doc appts.(one annual w/sleep doc and one semi-annual with my primary doc).  Both of them were cancelled and rescheduled for different dates so I am having to replan around those.  Add in Hubs surgery and recovery plus his eye doc appts. and shots which also need planning around.
At this point I have a small window of opportunity between June 21st and July 8th but I can't get Hubs to even agree to plan anything!
So it's looking like I am home bound until at least Sept. if we can't get anything together in the next week.  It's just not the Summer I was planning at all! 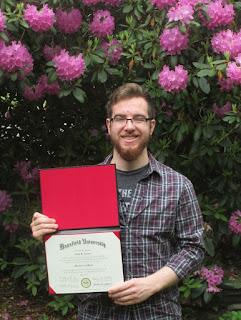 Ex-College Boy's diploma arrived and I got a picture of him with it n front of the rhododendron bush while it was flowering.
Then I got this photo which is even better.......... 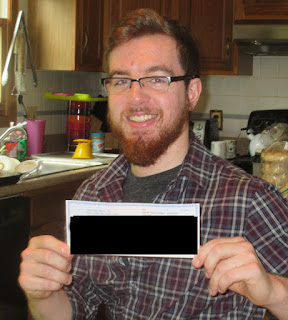 Working Man(formerly known as College Boy)holding his first REAL PAYCHECK!!!
No more restaurant kitchens for this guy!
He's got a job working for a real company(not that restaurants aren't real companies)making a decent wage.
And he gets benefits after 60 days!!  Can you say "off our health/dental/vision premiums"?!?
And once he's settled a bit and saved up for some short term/long term goals there's a 401K with a match.

I feel relief that I don't think he'll be living in my basement the rest of his life......hehehehe

Sluggy
Posted by slugmama at 3:41 PM