April Trip to Fredericksburg Virginia....Part One

So during my eldest son's school break in April, Hubs and I made a quick trip down to Fredericksburg Virginia to see him.
He'd been home for Christmas so it had been 3.5 months since we spent time with him.

On the way down we hit the Lindt Chocolate Outlet.
Since Easter had just passed all the holiday related items were 50% off. 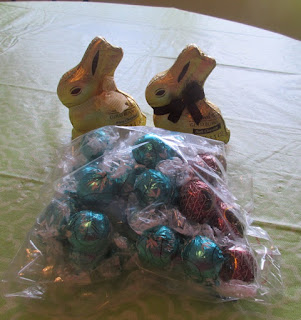 We picked up 4 bunnies(only 2 made it home since 2 were given to Eldest and his GF)plus a pound of assorted truffle "seconds".  Hubs has since eaten all the truffles, Daughter took one of the bunnies so there is only 1 bunny left.

We got to meet Eldest's new girlfriend while we were there.  She works as a guide at Montpelier and was waiting to hear about a new job she applied for as a guide at Mt. Vernon.(She got it!)

The first night Eldest picked the place to eat dinner.
Fredericksburg's version of an English pub....a mighty upscale version if you ask me, attached to the local shopping mall. 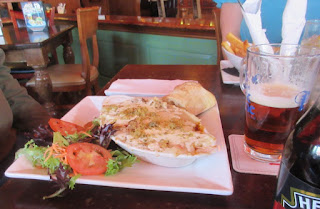 Hubs had Shepherd's pie with lamb I think..... 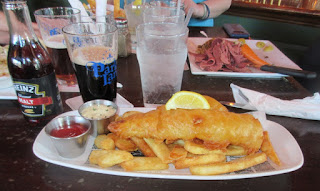 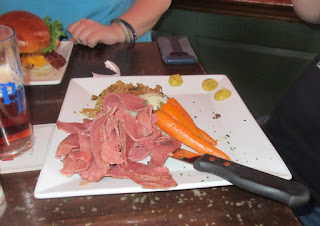 And eldest had Corned Beef, Cabbage, Carrots and Mashed Potatoes. 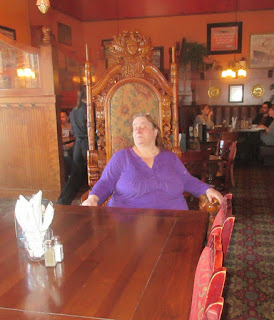 A throne grand enough for the "Queen of the Freaking Universe"!
All I needed was a crown and someone to behead...........

On the way back to Eldest's apartment we hit up the local Total Wine and More to use a gift certificate we had. 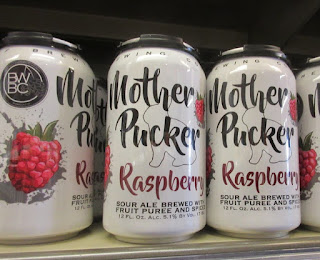 I always get a chuckle out of the quirky names of craft beers. lolz

The next day Eldest drove Hubs and I around so we could check out three of the Washington Heritage Museums in fFburg.
First on the itinerary was the Hugh Mercer Apothecary Shop....... 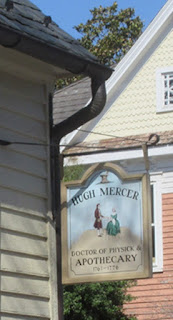 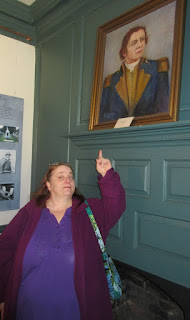 Mercer was a good friend of George Washington(my 11th cousin 8 x removed)and was an American Revolutionary hero.
Originally from Scotland, Hugh was a surgeon in the Jacobite army of Bonnie Prince Charlie(my 10th cousin 9 x removed)and was present at their defeat at the Battle of Culloden. 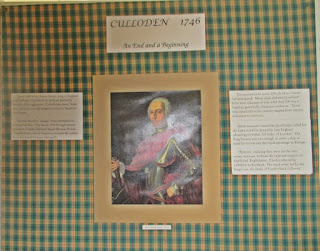 Hugh fled and went into hiding before hopping a ship to the New World where he settled in what was then the frontier of Pennsylvania and practiced medicine there for 8 years(now Mercersburg PA).
He served as a soldier in the Seven Years War(known in the New World as the French and Indian War) fighting the French and Indians, commissioned a Captain and promoted to Colonel after the attack at Kittanning.
Mercer served under General John Forbes with fellow Colonel, Geo. Washington.

In 1760 Mercer moved to Fredericksburg, where there was a large Scottish community, after befriending several Virginians and he set up a medical practice and apothecary there.  Mercer was physick to George's mother's, Mary Ball Washington, and Mercer bought George's childhood home(now called Ferry Farm)from George in 1774 after he inherited it from his older brother.
But Hugh Mercer wouldn't live to enjoy his retirement years on the farm because of the American Revolution.  He was with George at the Battle of Trenton, surprising the Hessian forces on Christmas night by crossing the Delaware River.  A few days later as Washington was engaging Major Cornwallis at the second Battle of Trenton, Mercer and his men was ambushed by British forces en route to Princeton NJ(this battle became known as the Battle of Trenton). 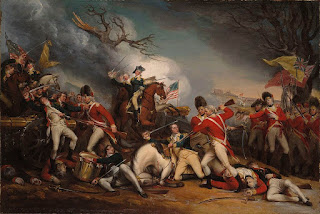 Here's the famous John Trumbull painting of the event. 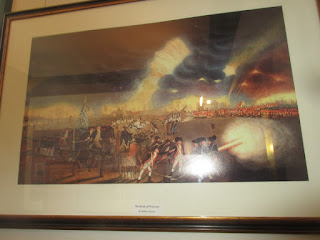 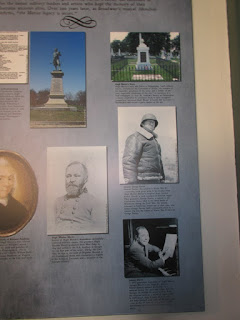 When I saw that George S. Patton was a descendant on that board in the Apothecary I knew I had a relationship to Hugh Mercer, et al., too.
Hugh Tennant Weedon Mercer, besides Hugh Weedon, had another son, John Cyrus Mercer.
John's daughter, Eliza Christina Mercer married Dr. Beverly St. George Tucker. Beverly Tucker is my 6th cousin 4 x removed back through my STITH family line.


So Hugh Mercer, Patriot and Martyr of the Revolution is specifically the Great Grandfather of the Wife of my 6th cousin 4 x removed.
Got that?

Also upstairs in the building was this hole in a wall.  If you looked through the hole you could read about the origination of the part of a house called a "Powder Room"....... 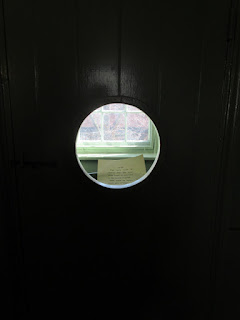 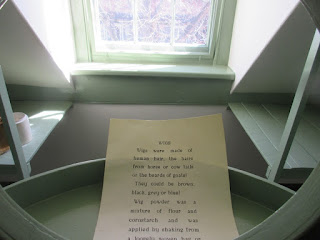 Gentleman of that era who wore wigs could put their head through the hole in the wall and a servant on the other side in the room would powder their wig to refresh it's look.  Flour and starches scented with floral and fruit essences could also be added to the powder concoction to mask the smell of men who didn't bathe except in July and August and wore wigs when out in public. 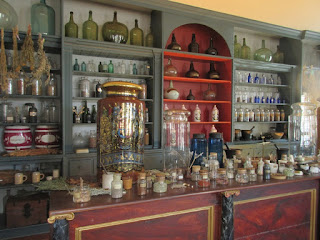 We toured the downstairs apothecary shop and the costumed/in character guides took us through all the items that the good doctor used to cure the ills of his patients. 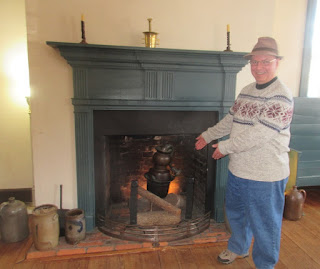 They even had a small still to make spirits.....only for medicinal purposes mind you.  ;-) 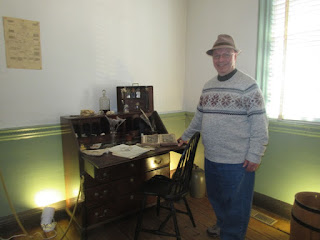 Then it was into the doctor's study and surgery room where Dr. Mercer saw his most ill patients. 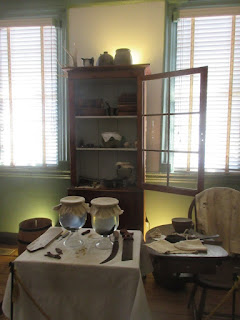 The doctor was not in at the moment so we chatted with his assistant.
She showed us his latest arrivals from the Continental, Hirudo Medicinalis. 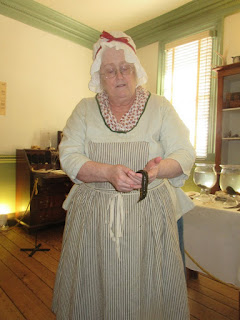 
We chose not to wait around for the bloodletting, bid the staff good day.... 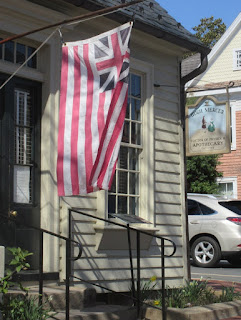 and ventured onto the next stop on the museum trail.


Part 2 coming soon and I'll leave you with this lovely tune from Hoagy Carmichael and Johnny Mercer.......

Email ThisBlogThis!Share to TwitterShare to FacebookShare to Pinterest
Labels: being related to everybody famous, genealogy, Hugh Mercer Apothecary Museum, leeches, trip to Fredericksburg 2018