Just some random stuff going on around here. 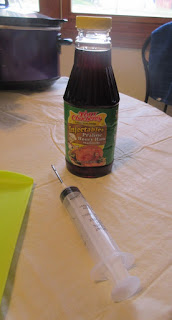 * The Daughter brought this injector thing and a bottle of marinade from Louisiana last Summer for ham.  It's a sweet praline sauce.  She wanted me to use it on my Easter ham. 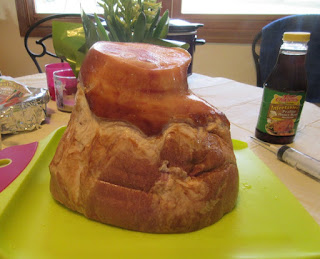 I read the ingredients and the marinade was just HFCS basically with some pecan flavoring thrown in.
Ugh.
But I tried to play Dr. Frankenstein with the ham.
The instructions said to use 2 ounces of marinade per pound of ham....which would have been 3 ounces more than what was in the bottle.  I used about half the bottle and it was all running out anyway.

* When I brush the dog I always do it outside.  This dog is part Husky and not only does she shed All. Year. Long. but she "blows" her coat twice a year.
yay!
Anyway there is a LOT of fur coming off her right now.  I leave what I take off her and throw it into the back yard in hopes the birds now building nests will use the material.
I was looking out the master bathroom window into that white flowering tree when a bird lit on a branch there with a gigantic wad of the dog's fur in it's beak.  At least I am helping out some birdie parents-to-be while trying to keep the level of dog bunnies down in my house. (It's a losing battle.) 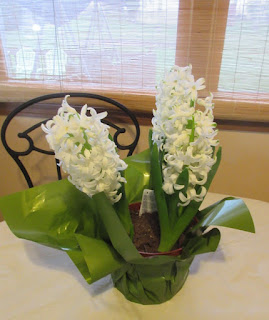 The potted Hyacinth Hubs bought me for Easter.  I just wish you had "Smell-o-vision". 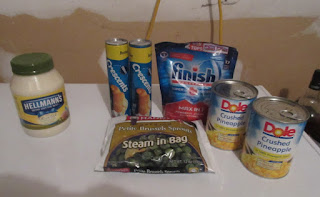 * The brother in-law and nephew came over for Easter dinner last Sunday.  I sent them home with quantities of canned Progresso soup and boxes of Cheerios.  They passed on the laundry detergent and facial tissues.  This was easier than lugging stuff up to the food bank. 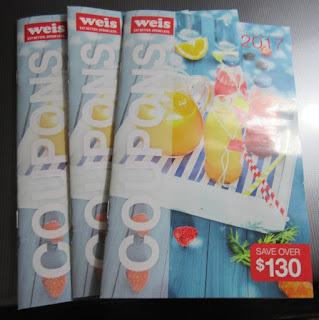 * I found these Weis Coupon Books at the store last Friday and again today.  So far I have wrangled 8 of them.  8-)  Be sure and look for them at your Weis(PMITA)Markets.  You can stack these WeisQs with Manufacturer Qs(both internet printed and the ones found in Sunday inserts).  Wait for a good sale and get stuff for real cheap!

* I had to go get semi-annual blood work done this week.
Go me.  It's already back(1 day!)and everything is good to excellent.  Nothing flagged as higher than it should be so I am good to go for another 6 months.
Yay!

That's about all from here.
What's going on in your world?

Sluggy
Posted by slugmama at 10:37 AM