Here are a few frugal things around here this week..... 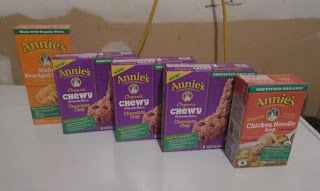 * An Annie's Deal at Weis I got this week.  After sale prices, coupons and $5 off instantly this all cost me .75¢ total.  But I forgot I had a .50¢ Annie's soup offer in SavingStar so now all this cost me a quarter.
Yes! ;-)
Daughter wanted granola bars for lunches at school, the chicken noodle soup is always a good thing to have on hand for colds/flus and I am sure she'll eat that mac and cheese at some point.

* Today was Fabulous Friday at Weis.  There weren't any one-day deals I really wanted so I stayed home and didn't go and spend money.

*  Still working on satisfying that $3K high deductible on our medical insurance.  Dr. said I could fill one of two prescriptions(similar drugs)depending on which one would cost me less money.  So I got the $378 drug instead of the $489 drug.
On another note--Hubs has an eye shot on Monday and the eye doc is trying a new drug for this so it is going to cost $3K, just for that drug for 1 shot. sigh.  We will have satisfied our medical deductible before January is over this year.
Double sigh.

I am so glad I keep about half of what we save in December and only put the other half into my Savings Challenge from December, and apply a portion to the medical deductible in the new year.  It keeps us from taking a $3K medical payment hit in January/February.  I know I have to pay the deductible but hate to have it all come at us at once.  I prefer to cash flow our deductible payments. 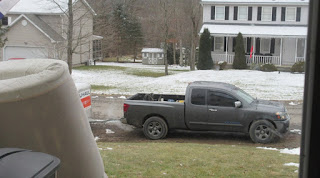 *  The BF left today to return to Louisiana.  For those who have asked, he and Daughter are NOT broken up by the move.  They are doing the long distance relationship thing for now.  When she has finished school and obtained her degree they will relocate somewhere together and restart their lives together.  We will miss BF although the good side of this is it will lower our costs on bills and Daughter will be able to focus on her studies better(at least I think so).  Time will tell how this all pans out.  I wish him only the best.

On the flip side, the frugal failings--

*  My sweet potatoes went bad and had to be composted.

*  There was more Eating Out/Take-Out in January that I wanted to see.  We got expensive take-out subs for BF's last dinner here as a treat.  If Daughter had her way, she's have me get take-out 3 or 4 nights a week.  This won't happen as long as I and her dad are footing the bill for meals.  We had a bit of extra money in January's budget since Hubs is still housebound and doesn't need WAM $(WAM=walking around money)so we aren't over.
February will be light on take-out eating unless I get sick again.

On a side note.....if anyone has emailed me and is waiting for a response(I know I owe a few folks one)it will be awhile before I get around to answering mail.
I have a Windows email program and it decided to shit the bed.  While I can still into my emails with a work around I can't send emails still.  It is driving me nuts!
Hubs will do some tech support on my machine this weekend so hopefully by Monday I'll be good as new.

Here's hoping everyone has a productive and/or relaxing weekend(depending on which you want!lol).
I'll be filing a year's worth of paperwork and pulling paper for taxes.
yaaaaayyyyy