So Tuesday night Hubs took a bad spill on the driveway while shoveling snow.

This resulted in a ride in an ambulance and a night spent in the ER(and then a ride home for me). 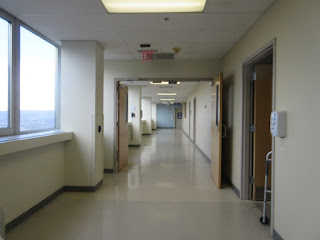 Wednesday was all about waiting around for determinations to be made after X-rays and CT scans(they confirmed a bad spiral fracture of the tibia and the fibula) and then for an OR so the orthopedic surgeon could shove a metal rod into Hubs leg.

By Thursday morning Hubs was no longer screaming with pain.  I suspect that smile is mostly drug induced. 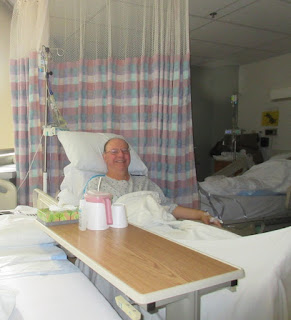 He'll have the nickname of Gimpy for 12-16 weeks and I'll be Miss "Step N' Fetch-It" and Miss "Chauffeur to Medical Appointments" once he gets home. 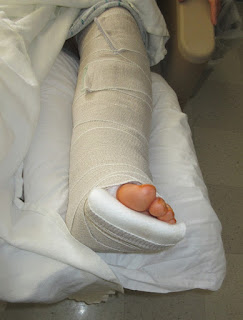 Hubs can't put weight on the leg for 6 weeks and then will get a walking boot.
Daughter and I started rearranging the furnitures last night as Hubs can't climb the stairs and will have to stay downstairs.
Luckily we put College Boy's old daybed in the living room when Daughter moved back home for the dog to spend her days lounging on.  The dog is being displaced from her throne for the time being.

And I am so glad now that we decided to put the small Xmas tree up in the living room and not the full sized one.  Hubs will have a walker until he heals and maneuvering around the downstairs will be easier.

Luckily he can work from home but all our travel plans for Christmas are now off. sigh.
Daughter's birthday dinner out next week is also in jeopardy or at least delayed into the new year.
I applauded him on his impeccable timing of "this". lolz

I guess Hubs was due for a "break"(bad pun intended)since the last time he rode in an ambulance/went to the ER/had surgery was when he was 12.

He said he was tired of playing second banana to me every time we had to go to the ER and wanted all the attention for once.
Well, he got it.  And I think it cured him of wanting to be the center of chaos for awhile.

I am fine.  Just worn out with anxiety and worry.
And waiting for the pile of medical bills to arrive.  Not exactly what I wanted in my mailbox for Christmas but hey, we've hit our maximum out of pocket medical payments for the year so basically the bills until Jan. 1 are all paid 100% by our insurer. 8-)
And I am guessing we'll hit our high deductible figure quite early in 2017 now. 8-(

And this too shall pass.