Hunting Down My Elusive Ancestry


*Let me start this genealogy post by prefacing it with this.....

When I was a very young child, I remember hearing something about there being Native American blood on my mother's side of the family lines.  I can't tell you exactly who said this(though it was my mother or someone related to me on her side of the family)but I have a recollection of "something".
Of course, now that I'm interested in all these things, my mother and her parents are long dead so there is no one in my life currently to get any more information on this to either prove or disprove this idea.

As I've been going through the paper records on my ancestors I've uncovered a few "interesting" things in regard to our ancestry and having native peoples in our family tree.

First off, here's a little background information on World War I US Draft Registration Cards.

There were 3 stages of the draft process, so your ancestor's card could be from one of these three time periods: 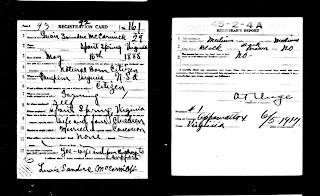 A 5 June 1918 card.....on this one, under number 5, they put each possible answer for race and you crossed off the ones that didn't apply to you, leaving 1 answer uncrossed...... 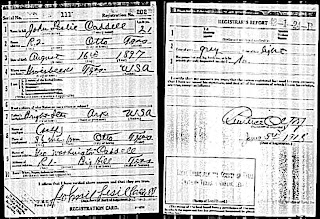 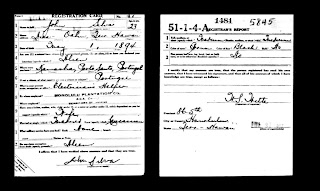 Each one is arranged slightly differently, but ask the same basic information.


The first "interesting" thing concerns two of the brothers of my maternal great grandmother and their World War I draft registration cards.

Russell Paris Baker(the son of Wesley Baxter Baker and Luretta Foster)registered during the 3rd draft period and his information appears on the third version of the Registration Card....... 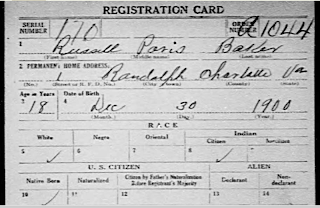 If you look closely, Under RACE, you can check the box for "White", "Negro", "Oriental" or "Indian".....and under "Indian" there is a choice between "Citizen" and "Non-citizen"(Which probably meant if you lived on a reservation, and thus within the Indian Nation, you checked Non-Citizen and if you lived outside of the reservation you checked off Citizen).

Russell Baker, who lived in Randolph, Charlotte County, Virginia in 1918, checked off "White" AND "Indian-Citizen". 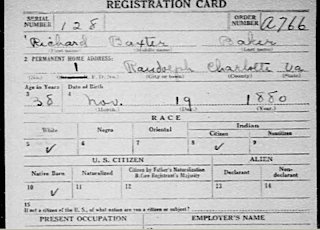 And their cousin, Bruce Prudent Foster(the son of my great grandmother's Uncle William Dillon Foster), who registered while living in Wilmington DE, also has the White and Citizen-Indian boxes checked as well....... 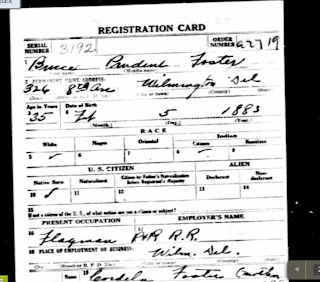 This information either means that my great grandmother Baker's mother's Foster line had a known to this generation Native American ancestor(s) OR that my great grandmother's brothers and cousin didn't understand how to fill out these cards fully and thought the "citizen" box meant a US Citizen and not a reservation vs. non-reservation recognized Native American person of that time.

So this does nothing to answer my NA ancestry questions one way or another.

Earlier this year, when I had my autosomal DNA tested(it tests random areas on your DNA strands and your matches can come from any of your 4 ancestral lines at the grandparent level) one of my closer matches was to a gentleman who is a known 5th generation descendant of William Taptico.

William Taptico(which was later shortened to Tapp)was the last Chief of the Wicocomico Nation.  The Wicocomico were an Algonquin speaking tribe of Native Americans who were living in what is now the Northumberland County area of Virginia(The northern neck of Virginia).   They were among the confederacy of tribes lead by Powhatan and were first encountered by Capt. John Smith in 1608 as he explored beyond where Jamestown was founded.  They were one of the first Native nations "given" reservation lands(land that had belonged to them to begin with)by the first English who settled in Virginia.  Over time the English used the courts to swindle the tribe out of some of those acreage, leaving them with about 1700 acres by the early 1700's from the original 4400 acres granted them in a treaty in the 1650's.

Anyway, I am related to this known descendant of the leader of the Wicocomico nation through my DNA but I don't know which of the 4 lines.  I suspect however that I am probably related to him via one of the European Northern ancestors that intermarried into his family tree(which I am assuming there are)as his Y-DNA(paternal) Haplogroup is Q1a3 but he has not listed his mtDNA(maternal).  My mtDNA is obviously NOT native American since it's a J Haplogroup(Northern European) and my Y-DNA, when it comes back, will most probably be a R1b or R1a(also European)given the paper trail I have compiled so far.
At any rate, there is still a chance we are related via his native line since I don't know nearly enough about how all this dna stuff works.
I've written the gentleman to look into doing some joint research with him to see how we ARE related(through which lines), but he elected to ignore my email.
Oh well.....

So I am still left with open questions and no answers.

And of course because my people on this side of the families are from Virginia going back many centuries I also have to deal with the "Plecker Factor" when trying to root out any information in regard to race.


The Plecker Factor refers to Walter Plecker, who was the head of the Bureau of Vital Statistics for the state of Virginia from 1912 to 1946.  He drafted and lobbied for the passage of the Racial Integrity Act of 1924 which instituted the "one drop" rule in the state.  He was a white supremacist who the Nazis consulted in regard to his views on race mixing and eugenics.
Plecker used his position to have anyone with any non-white blood to be classified as a Negro, even Native Americans, as he held the belief that the Virginian Native population had intermarried so often with the Negro population that no one at that point in history in Virginia was pure enough to be considered Native.  He had official records changed so that anyone with non-white blood was recorded in society as Negro.  Many Native or mixed blood Native people fled Virgina during this time to other states.  His manipulating of the records adds another layer of difficulty to trace anyone's Native ancestry in Virginia from that period on.

I had hoped to ask some at the family reunion last month but fewer of the old timers elected to come this year and I didn't get a chance to ask any of the ones who might know something.  I have connected with the wife of my mother's cousin who is their family's historian so I am hoping to get a dialogue going soon on this native American issue with her, if she is aware of it.
Stay tuned......