Let me start at the beginning....
Last month when Daughter came home from college for the Winter break, I had to take her clothes shopping.  She had to do job shadowing this month at the dr.'s office and she has an interview at the Medical College next week, so she needed some business/professional clothes--2 dress slacks, a blazer, 2 blouses.  We hit Fashion Bug first(sales and I had a gift card)and found nothing.  We hit Salvation Army and found a blazer and 1 shirt.  Then we hit Kohl's and found 2 pr. of slacks and another shirt-all on sale.  I also found some pants for #2 son and a new comforter for his bed(which I have been promising him for about a year)-all on sale while we were there AND they had that Spend $50/Get $10 in Kohl's cash thing going all month, so we got items on sale and got Kohl's cash for later.
I also went back and made some Christmas purchases the following week.
In the end, I had $60 in Kohl's Cash to spend during the week between Christmas and the day after New Years.

After Christmas, Daughter gave me the pitiful look and said she needed new sweat pants, so I gave her $40 of the KCash and sent her up to look at sweat pants.
She came home with .02¢ left on the KCash and 2 pair of pants.
"$20 for sweat pants?!?!", I screeched.
"No, nice casual pants I can use as sweat pants", said she.
"If you wanted/needed sweats you should have gone to Kmart/Target/Salvation Army and bought sweats for way less than $20 a pr. and not spent MY KCash!!", I retorted.
Ugh.

So I had $20.02 left in KCash to spend.  I don't buy clothes for myself at Kohl's and I had picked up all the non-clothing items I wanted/needed there before Christmas so I decided that I would go buy myself a 'nice' purse.

My current purse came from Target online and cost $5 on clearance.
The one before that was some outrageous amount like $7 on clearance at Kmart.
As you can see, I am not about carrying around an expensive hunk of faux leather/plastic/fabric on a strap status symbol that costs about a week's pay.
But I thought I'd throw caution to the wind and get myself a marked down to $20/usually much more expensive purse with this KCash.

Thus began the great Purse Hunt.......
Hubs decided to accompany me on this safari into the jungle of the purse dept. at Kohl's.  Just about every purse was marked down from 40-60% off, which helped my KCash go further and helped me NOT to have convulsions when I looked at the price tags on the bags.
WTF?!?!?
$110 for a hunk of plastic with 2 handles that you can cram the stuff you can't leave home without into?
Ok, so it was $60 on sale, but even so!!

An identical bag was only $30 on sale but that was because it did NOT have the name Vera Wang on it.

Too bad that one didn't meet the Sluggy bag test--1 strap not 2, the strap has to be long enough for me to carry said bag on my shoulder but not too long that it hangs to my knees, and the strap has to be substantial enough that it won't fall apart within a short time even though the bag is still in good condition.

All the bags that would have not cost me anything OOP were tiny "going out on a date" bags or for a nubile  20-something gal bags.  I could have maybe wedged my wallet into one of those but keys?....checkbook?....lip stuff?....phone?......never would have fit.

After a solid hour of bag hunting, in which I believe I tried on every single style/color/brand configuration of bag they had I found 1 that met the Sluggy criteria. 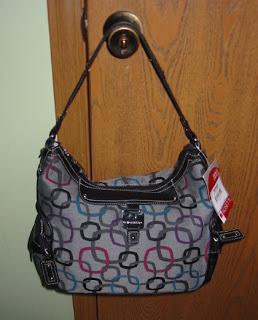 *Satchel style
*Colors black and grey with purple, fuschia and teal-they had a tone-on-tone of this same fabric in black/charcoal I liked better but they didn't have this style bag done in that fabric
*Strap a good size, not rolled so it stays on the shoulder and extra wide at the center(you can't see that in this shot)to reduce 'slipping' plus strap width reduces change of strap breaking prematurely
*Not too many pockets/zippered compartments inside and ample enough for all my stuff
*Price?.....well even on sale and using $20.02 in free KCash I shelled out $13.04(After an additional 15% off the amount after using the KCash and then state sales tax).

So it's not a Vera Wang, a J-Lo, a Dana Buchman or whomever Designer bag.  I don't care.
I did still spend more than I wanted to but I can live with this price.
Hopefully it lasts me for a good long time.

Of course, while we were in Kohl's Hubs decided to look at the men's business dress shirts and he ended up bringing home 2 of those as well.  My first inclination was to put the bag back and used the KCash on his shirts.
But I stopped myself and got the bag.
I saved $34 Thousand of our income last year dagnabbit!.....I DESERVE that $14 purse! ;-)

I like my purse and I am content with the money I spent.
That's all that really matters, isn't it?
That and the fact that I didn't put this on a credit card. 8-))

Sluggy
Posted by slugmama at 3:48 PM