Ever Slow Sluggy Saves-A-Lot on Meat

**This post is linked to the 2012 Money Saving Challenge over at Frugal Makes Cents.**

For the last few years, Hubs and I have taken short mini vacations to Ocean City MD in the fall, after the hoards of sun worshipers leave and the place is once again civilized and empty.

As is my frugal habit, we do our souvenir shopping at food stores down there.  Hardly ever stuff, just food.
One such outfit we frequent is Save-a-Lot.  That's the penny pinching cheaper brother of the mega Acme, Albertson's or Jewel-Osco chains.  All are owned by SuperValu.
There is a Save-a-Lot in West Ocean City we like to stroll through and often bring non-perishable foodstuffs home from.
We get home from those trips and I lament that we don't have access to those Save-a-Lot deals around here.

Well the other day, I suddenly realized that yes, WE DO have a Save-a-Lot in a town about 20 mintues south of here!
Yes, I'm rocking the Homer Simpson "Doh!" now. ;-)

Having great weather for a January yesterday, Daughter and I took a ride down there to do some browsing and we came back with this.... 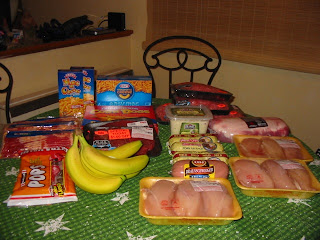 The box of Easy Mac in back is for Daughter to take back to college....not a great deal at $2.59.
The 2 no name mac & cheese dinner boxes were .39¢ so I bought them for Daughter to try while she is home. *She is addicted to that chemical cheese thing.lol
The cole slaw was also not a frugal buy at $2.99 and the Tootsie Pops are my weakness at $1.19 a bag.lol

They had 1lb. packs of bacon for $1.99.  Not a name I know but the slices looked real nice and thick.  You can barely touch bacon around here on SALE for $3.99, forget regular retail which is upwards of $6.99!
I found Gwaltney(a well-known name in pork down South that is hardly EVER seen up here!)roll sausage, 12 oz. rolls for .99¢ each.  At that price, the 1 lb. rolls I am use to buying/seeing would be $1.32, which is an amazing price!
The store also had country ham!!.....biscuit slices, ends, side meat, steaks and whole country hams!  The whole hams were $1.99 lb......I think I actually squealed with delight when I saw that.lol
I bought 3 rolls of sausage and I will definitely be back for more later. ;-)

The store isn't that far and I have other errands I can run to make the trip more economical.

The worst part?  It's next door to a liquor store and there was a drunk staggering around the parking lot as we left soliciting for money so he could "fortify" his bottle of orange juice he carried with him, taking swigs of every now and again.

If you have a Save-A-Lot in your area, go check them out!