* Pay Bills  DONE  Everything got paid and on time.  All bills put on the credit card are paid off each month and we don't pay interest on that. 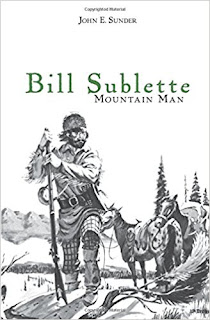 Though I've wanted to read this book since seeing in the gift shop at Fort Laramie last July I resisted spending $20 on it there.  I got it finally online for under $10(free shipping on Amazon too)and consumed it during most of May.
Bill Sublette, one the original Mountain Men of the American West, along with his siblings, is my 1st cousin 6 x removed.  There were 5 Sublette brothers who each went West for adventure and fortune(they were Sophronia Sublette's brothers-Sophronia has already been discussed recently on the blog).  The Sublette boys were a one family power house in terms of American exploration.  Bill was the most successful in that arena.  The writer paints Bill as a noble, trustworthy and successful business man who went out of his way to help his extended family.
At his death he owned a good portion of what would become downtown St. Louis Missouri.
Much of out early American knowledge of the wilderness beyond the Mississippi River we owe to Bill Sublette and men like him.  There are lots of Western places and features named for him too.
I highly recommend this book if you are into early exploration of the American West. 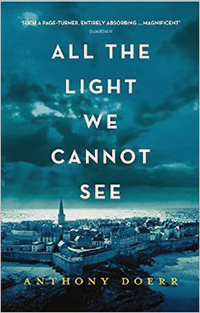 "All the Light We Cannot See" by Anthony Doerr

Another highly recommended book due to the writing style and subject matter(WWII). I hope the movie they are making based on this book does it justice.  The author had a winning writing style, the language was simple and the chapters were short(though the book was over 250 pages).  If novels give you pause because of the length this is one you will zoom through to get to the end to see how it all comes together.  It's no wonder this author is an award winner many times over.

*  Clean my Desk  DONE(sort of)
The desk area was cleaned early in the month though looking about me, it is almost back to it's very untidy state and could use some more work. lolz 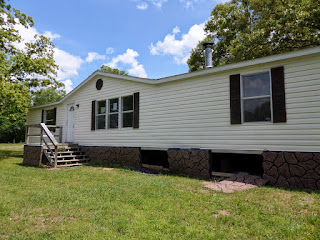 So glad this is off my financial plate.  And the check for the unused house insurance has arrived and is going into the bank today.  Woohoo!

*  Clean out Freezer 1, 2  DONE  I went through both fridge freezers AND the chest freezer as well.  Things are a little tidier and I've pulled "lurker" items to the front/top to get them used up.

*  Clean/Organize Pantry  DONE  Another bear of a chore but it's done.

*  Organize Garage  IN PROGRESS  Rome wasn't built in a day and the Garage is getting there.
I've done most of the stockpile in May but in terms of other things out there I need Hubs assistance.  And parts of the garage won't get done until the kids move out! ugh.

*  Change out Clothes for Summer  IN PROGRESS  I've only got to go through my long pants(to throw out some rags and organize it all back in the drawers)and that is done.  I've pulled out some clothing that hasn't been worn in years to donate and some items that no longer fit(undergarments)with tags still on them that I can sell.  I'll use the proceeds of those sales to purchase new bras that DO fit!  Seems I lost most of my weight in my boobs. lolz 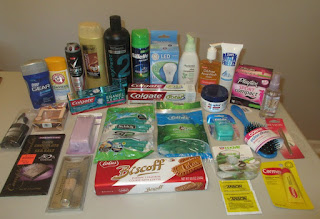 I held two Giveaways in May, letting each winner pick out what they wanted to receive. 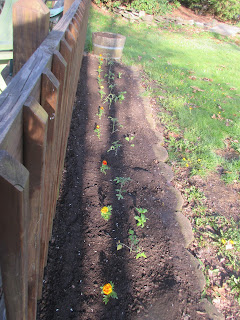 I need to get another updated shot of what the garden looks like now....coming soon.


*  Plan possible 2018 Travel  FAIL  A big, fat fail as a matter of fact.  We just can't seem to get this together.  Canada is now out....unless we go in the Fall so not quite off the plate.  I wanted to take two or three of the kids down to VA to my brother's house for a visit(he hasn't seen two of them in years)but Ex-College Boy got a REAL JOB! right away and doesn't have time now for a trip and Eldest son won't give me a definitive answer on his Summer plans(He teaches so has Summers off). Ugh...kids!
I want to go out West again(Arizona way)to see Cousin Sonya but she's still stuck in IL with no end in sight yet.  I'd like to go see Lorraine since she has Summer's off but Alabama in Summer is not tempting! lolz
I don't know......I'm a flat squirrel lately. 8-(

*  Work on 2018 Goals  FAIL  I haven't even looked at the few Goals I wrote down at the beginning of the year to see if/how I've done on those or add in any way to them.  It's all I can do here these last few months to keep up with my monthly "To-Do" List of goals.  Maybe I need to just focus on the monthly/immediate goals I can accomplish and not worry about Yearly Goals?
Maybe.

It's been a mixed bag of successes and failures here.  One big goal and some little ones were achieved.
Onward and upward to June!

How did your month shake out?
Any successes?
Any not-so successful ventures?

Email ThisBlogThis!Share to TwitterShare to FacebookShare to Pinterest
Labels: May To-Do List, what successes and failures we had last month