First off let me say that we are FINE!  I got your email CT MOM but thought I'd let everyone know in a blog post what happened and that we are aok.

Last night a storm front came through this area of PA.
Suddenly a little before 10pm the wind picked up and then torrential rain(mostly blowing/falling sideways).

I ran to close windows downstairs and yelled upstairs for the kids to close the freaking windows! as the back of the house and was getting flooded from the rain coming in.  Then the lightning and thunder started and the lights starting cutting in and out and the answering machine on the landline started beeping.  I turned on the television and the TV signals were cutting in and out as well.

About 10:15 pm things stared settling down and the TV signals righted themselves.
The next 2 hours on the local tv stations were live weather reports, preempting the network shows.

In the light of day it has been confirmed that a tornado touched down in Wilkes-Barre Township, PA right near our major shopping area.
The Wyoming Valley mall was undamaged but lost power and the parking lot and roadways are full of debris from businesses surrounding it.

Across the street from the mall is the U Haul business next to a Nissan dealership. 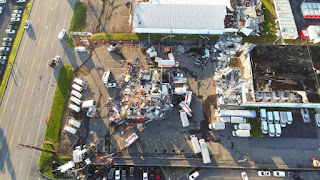 This is an aerial photo of the U-Haul dealership.  The blob of lumber in the center of that parking lot is what is left of the building.  This is where we used to rent a cargo van to get Ex-College Boy back and forth to school.  Live electrical lines were down everywhere, debris strewn everywhere(a U Haul truck part was found inside a store front .25 mile away).  The huge Propane tank at U-Haul was leaking but luckily they hosed down the escaping gas and it didn't ignite and blow more stuff up.

Two adjacent furniture stores, a restaurant and a mobile phone store near the car dealership and U-Haul were also damaged.

An entire strip mall an access road across from the large furniture(Ashley)was destroyed.  A Gamestop, an America's Best Eyewear, a Sneaker King, a Famous Footwear, a nail salon, Tovon and Co.(a diamond dealer) and a Panera Bread will all be demolished.  The nearby Smokey Bones restaurant also was damaged but not as extensively.

At least 2 dozen stores may have to be condemned and torn down as they are so badly damaged.

The tornado then skipped over to another shopping area, the Arena Hub Plaza, knocking the roof and one side of the Barnes and Noble down.  It traveled across that parking lot and hit the Dick's Sporting Goods store, tearing off the front of the store and the roof.  The Dick's sign(a giant basketball sign)ended up 6 miles up a mountain in the Bear Creek creek. 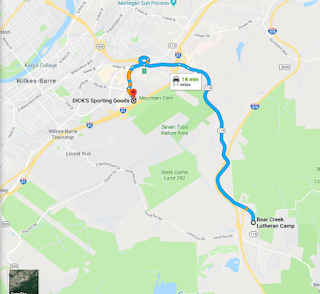 Dick's Sporting Goods is the red dot on the map and the end of the blue line is approx. where the sign ended up.  It's about 6 miles as the crow flies and up a mountain.

Some photos of the damage are HERE and check out the slideshow at the bottom HERE on the Weather Channel's page.

This same twister, or a sibling of ours, touched down in Bradford County, about 90 miles NW of here, on it's way to our area, doing lots of damage there.  Luckily it's a rural area so lots less to destroy there.
If this thing had hit an hour or two earlier there could have been massive casualties.  The stores were closed mostly at 10 pm so only 6 folks(mostly overnight workers)were hurt and no one badly so.

This sort of thing is very rare for our area.
Dec. 7th of 2006 a tornado hit my town.  It turned out to be the first tornado to ever strike PA in the month of December since they started keeping records.
This house down the road from me caught the worst of it then........ 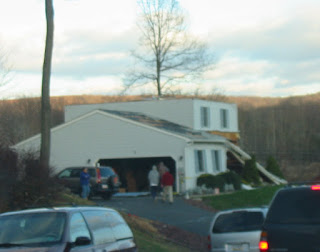 So that's the excitement here in NEPA.
Hoping things are calmer in your part of the world. 8-)))